When a young mother is murdered in the isolated ranching town of Lost Trail, Montana, the father of her child is the first suspect. In this case, there are two: the biological father who hasn’t seen his daughter in over a year and the adoptive father whose life hangs in the balance as he struggles with cancer.

Zak Waller is Lost Trail’s newest deputy. He’s also locked in a power struggle with the town’s old-school Sheriff. If Zak solves this case maybe he’ll finally get the respect he deserves. But is he willing to tear a family apart in the process?

A week before the murder trial Zak Waller was still at his desk in the sheriff’s office. The size of said office—a large bullpen and reception area with one closed office for the sheriff—reflected the population of Bitterroot County, which hovered around two thousand souls, most of whom lived in or close to the town of Lost Trail.

This Montana town had been Zak’s home for all his life and though he was young, in his early thirties, he had no wish to leave. The wild Bitterroot Mountains, the hectares of unspoiled forests, and the undulating ranchlands constituted, to him, as to John Steinbeck, “the last, best place.”

Yet even here, where cattle outnumbered humans, and problems of organized crime and drug trafficking were nonexistent, evil could be found. Usually it hid in dark corners, buried deep in the secret hearts of the afflicted few. But this past year evil had bubbled to the surface in alarming ways.

He knew he’d arrested the right person last February. Yet some undefined worry niggled in the back of his mind.

He poured what he hoped would be his last coffee of the day, then went back to reviewing the evidence. He’d been through it all today, several times. But he decided to read the transcripts again, the ones he’d made shortly after the arrest last February. He reached for the stack of papers. As he read the words, in his mind he heard the killer’s voice:

I never intended to shoot anyone. I just had to set things right. There was a skiff of snow on the ground. I followed the footprints, very careful not to step outside the tracks. When I finally caught up, we argued. And then I guess I pulled the trigger, though I can’t remember that part. All I recall is watching the red blood bloom as I reached down to take what I wanted…

There was something not quite right…

Bitter End is available in the following formats: 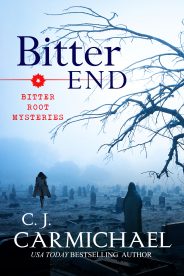 Did you know that Bitter End and many titles are available digitally from Tule's own bookstore? Check it out!