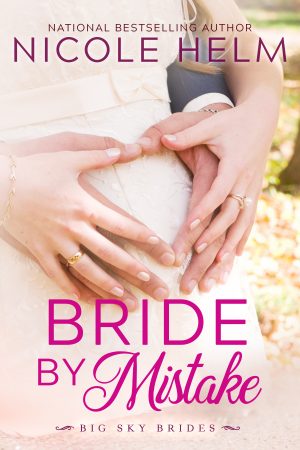 Wedding fever has hit the little town of Marietta…

And Kaitlin Shuller’s groom of her dreams is marrying someone else… her sister.

Worst day ever. Her heart is broken, and all her carefully laid plans destroyed. Enter Beckett Larson, her older brother’s best friend and a very good bad decision.

Beckett has spent his life trying to outrun his bad reputation, but everyone already thinks the worst of him, so when Kaitlin offers herself to him — virginity and all— he just can’t say no.

But one night together has permanent consequences, and this time Beckett knows he can’t outrun his bad boy reputation. He’s determined to make Kaitlin his bride…even if he has to seduce her down the aisle.

Kaitlin Shuller blinked back tears while forcing herself to smile. “Thank you,” she croaked. She had been managing not to cry in front of him for weeks now, why should the actual day be any different?

But he was in his suit, and she was in her dress.

The man she had loved since the third grade, standing in a tuxedo, surrounded by altar flowers she’d put together herself. Beautiful white hydrangeas, unfurling white lilies, the deep green of the filler twirled and pinned artfully—if she did say so herself. Subtle and rustic burlap accent to the giant urn.

It was country chic perfection, no floral detail left ignored. The church looked and smelled like a magazine spread and high-end greenhouse brought to life.

All for her sister’s wedding to Carter.

Kaitlin had been so certain she’d come to terms with this, but right here, right now, there were no terms. Only pain.

She’d built her life around him. Since she’d been ten, Carter Finley McArthur had been meant for her. She’d been sure of it. Planned everything in her life with the utmost confidence it would be suitable for a McArthur, suitable for the future doctor, suitable for all the good they would do. Together.

The stability and assurance of the McArthur name was supposed to be hers. Instead, Sierra was marrying him.

He pulled a handkerchief out of his back pocket. “I came stocked,” he said with a charming smile. “I hear these things bring out tears in everyone, though I never thought you’d be the first victim.”

She stared at the square of cloth, only then realizing a tear had escaped. She never cried. Except at funerals and the occasional sad movie.

Kaitlin had never been known for being a sap. Driven. Determined. Organized. Charitable, when pushed, but never emotional. But she took the handkerchief because it was expected of her.

She had made a life out of discerning what people wanted from her and going after it wholeheartedly. She’d gone to school for accounting to suit her father, fell into floral design because it would please her mother. She’d done the flowers for Sierra and Carter’s wedding because it would make everyone she loved happy.

She grasped Carter’s handkerchief, emotions she’d been banking down for six months swirling around her.

It should be me.

All Sierra had done since the day she’d been old enough to walk was cause trouble and follow the beat of her own internal drum. Sierra never cared about grades. She’d skipped school, missed homework assignments, failed tests. Sierra had been caught with beer in the ninth grade. She’d smoked all manner of things, and Sierra had definitely had lots and lots of sex.

Kaitlin had touched none of those things, all so sure she’d be rewarded for it.

She was no longer anywhere near sure.

“You’ve been such a great friend to us,” Carter said with an affectionate pat of the shoulder. Bare because her sister had picked the bridesmaid dresses. Kaitlin would much prefer to be in a nun’s habit. Anything to keep his palm off her shoulder.

“I don’t know how you managed to pack it all in,” he went on and on. She had no idea what to say to make him go away, and even if she had figured out some combination of words, no doubt she would have only squeaked.

This was it. End of the road. No terrible hope that Carter saw the error of his ways without hurting Sierra too too much.

They were getting married. He was going to be her brother-in-law. The man that had been a part of every sexual fantasy she’d ever woven. The man she’d idiotically, steadfastly saved herself for.

She caught a flash of a dark head at the back of the church, and when she recognized the face she couldn’t stop a grimace.

Okay, there was one other man who had starred in her sexual fantasies, but only her subconscious ones. Where she had no control. While real-life Kaitlin wanted the sturdy, charitable, Doctor Without Borders, her subconscious had a thing for ugh.

Regardless of her feelings for Beckett Larson, conscious or subconscious, he was her one and only escape. So, she’d take it.

Both men in the room startled, but she would not undo the action no matter how much she disliked Beckett. No matter how much the task of having a conversation with him made her want to burn her skin off.

He was terrible, and one of the few people she’d never been able to pretend she liked. She couldn’t stand him, and everyone knew it.

So, it was no surprise Carter and Beckett looked at her like she’d been hitting the champagne early.

He was dressed in a suit, an expensive one it looked. All black and well-tailored, but of course he wasn’t wearing a tie. He probably wouldn’t. Beckett took the role of bad boy about as seriously as…as…

Well, as she took the role of good girl, she supposed.

Engaged! Can you believe it? And then Sierra had giggled in the way only rule-breaking, careless, reckless, selfish youngest sisters could.

“Easy there, tiger,” Beckett muttered, presumably because she was no longer smiling. She was all but baring her teeth.

She took a deep breath. She was not used to all this…emotional upheaval. Usually she was calm and collected. Serene. Pleasantly moving toward her end goal. Happily ever after with Carter.

She wanted to stomp her feet and scream. She wanted to pound her fists against the pews until they cracked. Her plan was being demolished today and all anyone could do was smile and look gorgeous.

She wanted to curse. In church.

But you would never do such a thing, would you?

She glanced at Beckett, his sardonic smile, his jet black hair and ridiculous blue eyes. Stubble. Dimples. A small scar on his cheek. Underneath the suit he had more scars, tattoos. He even rode a motorcycle of all things, or at least he had on his last whirlwind visit to Marietta.

He was such a cliché she wanted to push him.

Get ahold of yourself.

She had never been violent in her life. She would not start now just because her plans were all coming apart at the seams. She’d designed the floral arrangements for this wedding. She had gotten through months of wedding planning without falling apart.

She looked up at Beckett’s concerned blue gaze. Normally it was the kind of thing that would set her teeth on edge. How dare he be polite to her? How dare he flirt so outrageously with her? How dare he…breathe half the time?

So, instead of gritting her teeth or letting temper steal over her normal calm, rational sense, she smiled. Sweetly.

Her attempt at sweetly anyway.

“Such an emotional day,” she said, waving Carter’s handkerchief. She wanted to light it on fire.

Beckett would have a lighter.

Such a strange thought, but he no doubt would, and as there was no love lost between the McArthurs and Beckett, he’d probably hand it right over.

Kaitlin let out a measured breath. She needed to be alone for a few minutes to find some semblance of her normal control. To find a goal to reach.

Making it through this wedding without imploding would be a start.

“You seem a little pale. Would you like me to get your mother for you?” Carter asked, making a point to stand between her and Beckett.

Again, she wanted to swear. In church. One of the more vulgar swears at that.

“I just saw her,” Beckett piped up, his big hand closing over her elbow, effectively boxing Carter out of the equation. “I’ll take you to her.”

With that, Carter was dismissed, and while usually Kaitlin would as soon chew off her own arm than let Beckett lead her anywhere, today Beckett was just the escape she needed.

Bride by Mistake is currently available in digital format only: 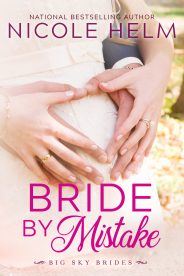 Did you know that Bride by Mistake and many titles are available digitally from Tule's own bookstore? Check it out!