Captured in a time not her own.

For modern day Gabrielle Ross, a college student and fencing enthusiast, the unexpected happens—a mysterious fog transports her back to the year 1760. Suddenly she finds herself aboard a sailing vessel where sea battles and sword fights make it far easier to die than to live.

Branded a stowaway and a spy, she is forced to pick up a sword to defend herself. While being interrogated by a take-no-prisoners English sea captain, Gabrielle must fight for her independence in a time when women have none.

While doing his part for “king and country” aboard the HMS Seawraith, Captain Sinclair has earned a reputation for courage and daring. Women find him irresistibly heroic, and yet, no woman has ever touched Damion’s heart—until a twist in fate has a fiercely independent 21st-century woman landing on board his ship.

Though unsure if Gabrielle is friend or foe, Damion is drawn to the spirited beauty in ways he cannot deny. As he becomes increasingly intrigued by her unusual mannerisms, the defiant tilt to her chin and thunderous flash to her gray eyes, he begins to unravel her secrets. Damion embarks on a skilled seduction that not only places Gabrielle in his bed—but in his heart as well.

The fog rolling in worsened with each passing hour. The night winds agitated the dense gray mass and attempted to scatter the fog. It refused to give up, clawing over the cresting black waves as it single-mindedly continued to harass the British ship, impeding its journey. The ship’s captain thought to punch out of the fog-bound harbor and make the open seas. But no matter how clever or skilled the captain, the fog bit down and refused to let go.

The Seawraith, a sixth-rate frigate, sliced through the Atlantic Ocean. She dropped her nose into a wave and shouldered the water over her bow as her masts tried to shake loose the fog dripping from her yards. A violent wind rattled the air and sent the fog coiling around her masts. Leagues from Boston Harbor, the sudden change in wind nudged the Seawraith from east to south.

The ship mounted a cresting wave and her bow leaped for the night sky. The crew snapped into action, plunging into clouds of fog as they crept along ratlines and gained toeholds on the foot ropes.

In a cascade of white, sails spilled from the yardarms and were jerked to life by a brisk wind. The ship shot up into the air and smacked into a thrusting wave with a jolt. The sea slammed into the weathered side of the ship and exploded into small wet, pellets.

Gabrielle Ross staggered to her feet, shaking her head and blinking salt water from her lashes. She swiped a hand down across her face and flung the water from her fingertips. “Idiot!” she scolded herself, flicking water off her black blazer and worn jeans. “That’s what happens when you pass out drunk on the beach.”

A series of creaks and groans, an odd flapping sound above her head, and snatches of male voices tangled with the fog surrounding Gabrielle. Without warning the ground dropped out from under her and before she could scream it returned, solid and sure beneath her feet. Gabrielle gasped, pitching forward as the ground took another roll and the palms of her hands smacked against a wooden keg the size of a large trash can. “What the hell?”

Ignoring the sting to her hands, Gabrielle’s head shot upward and her eyes skimmed the beach for houses. With bewilderment she inspected the tangles of mist and a thick crisscrossing of rope. Her vision filled with chunky white sails. Gabrielle stood quiet and still as she watched the spinning whirlpool of fog distorting everything within her vision, giving it a bent look similar to mirrors in a fun house.

“Away aloft!” The command jabbed through the fog-soaked air.

“What the—” Gabrielle whispered in horror, her heart snagging in mid beat as she glimpsed a steady stream of men pouring up roped ladders, appearing much like a human ant heap as they piled one after another. She watched as they climbed the rigging of an old sailing ship and swung at the end of ropes. They performed the tasks skillfully and quickly. These men, and this old sailing ship, did not belong to the twenty-first century.

“Let fall!” rumbled through the patchy air and Gabrielle ducked as a sail above her head unfolded, flapping once before it was plucked by wind and tamed by men. The ship bucked sharply before it dropped into a fathomless hole, going down, down, down. Ocean water crashed over the deck and curled under and around Gabrielle’s low-heeled black boots.

A sickening feeling came over her and she shook her head in bewilderment and confusion as she looked past the distorting fog climbing up a towering mast. “Hope,” she called out in a strained voice, praying for her friend to answer. No answer came. The party. She remembered the party at Hope’s beach house. She didn’t remember any plans to board an antique ship. But after the unexpected arrival of Eric, her ex-boyfriend, Gabrielle had choked down a few shots of tequila. She staggered out of the house to breathe fresh air and strolled down the beach, watching a strange fog stumbling toward shore.

She’d had a long week of dance rehearsals and college finals. Had she passed out on the beach? She remembered feeling peculiar, like coming from a deep sleep, like something or someone tugging at her. When she opened her eyes she landed here—wherever here was. The fog seemed to harden. Gabrielle stepped into it, plunged through it, and stumbled to a halt at the ship’s rail. Her eyes ached as she searched for lights on the horizon, for sounds of traffic . . . for land.

The ship’s bow bucked violently. Hurled forward by the push of the wind, Gabrielle tipped up and came close to toppling over. She hugged the rail as the ship shuddered and jumped. Water poured over the starboard side, ripping Gabrielle away from the railing and flattening her back against the kegs in a display of crucifixion.

Trickles of fog danced like slender white fairies, curling, twisting, whispering past Gabrielle’s ears. She rolled to her knees upon hearing the sound of the captain’s voice not more than ten yards from her. A tall man, unobscured for a second, appeared strong and commanding as he paced, his eyes fastened on the helm in hard concentration. A flicker of moonlight glanced off a sword spanking his side. A weapon hooked to the captain’s belt, appeared huge, heavy, and unlike any modern pistol she’d ever seen.

Captive Angel is available in the following formats: 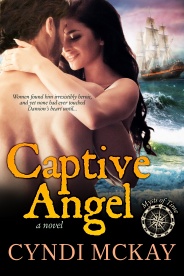 Did you know that Captive Angel and many titles are available digitally from Tule's own bookstore? Check it out!