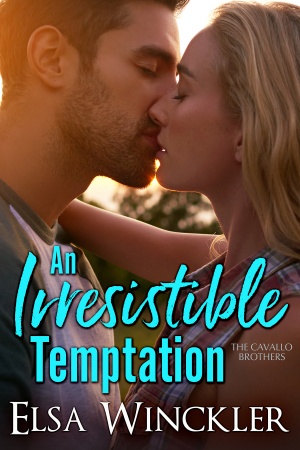 She has enough trouble in her life – she doesn’t need him to add more.

While school teacher Dana Roux is attracted to hotel tycoon David, she has no intention of ever acting on it. He’s way out of her league, and, as a former investigative journalist, David would soon discover the sordid scandal of her father’s incarceration and suicide.

David Cavallo quit his job as a reporter because he no longer had the stomach for it. Now he works with his brothers, enjoys life and especially enjoys flirting with women. Usually they reciprocate, but Dana steers clear even though he can tell she’s tempted. But at his brother’s wedding, they share a kiss that leaves him aching for more. Could Dana be the one? Before he can explore his feelings, he learns of his role in her father’s fall and suddenly his hopes for romance become complicated.

Will the past define their future?

Her best friend, Caitlin Sutherland, had married hotel tycoon Don Cavallo at the beginning of the year. Caitlin’s sister Zoe had married Dale, Don’s brother, during a ceremony on the tiny beach in Hermanus a week ago, but tonight the wedding party was being held here on Mahé, the biggest island of the Seychelles.

Dana realized she was scowling and tried to smile. But she wasn’t sure it was working. If David flippin’ Cavallo would just stop staring at her, she might start to enjoy the evening. Ever since she’d met the third Cavallo brother more than a year ago, he’d been a thorn in her hide, irritating her with his constant flirting.

She grabbed her bag. Maybe if she could escape for a few minutes, he would find someone else to stare at.

“I’m going to the ladies’ room,” she said to Hannah, who was sitting next to her, the only Sutherland sister not wrapped around a Cavallo brother.

“I’ll join you,” Hannah said, a grateful expression on her face, and they both got up.

The next minute the band started playing a slow dance and before Dana could move, David was standing in front of her. He held out his hand, a challenge in his eyes. “Dance?”

A quiver slid along her spine. Damn it to hell—why did his voice always have the same effect on her, melting her bones with just one word?

She wanted to refuse, wanted to turn around and flee as far away as possible from this party, but then she looked up and saw the knowing look in David’s eyes. He knew, damn it. He knew exactly how uncomfortable he made her, and he knew she didn’t want him touching her.

Steeling herself against the onslaught on her senses that was coming, she lifted her chin and placed her hand in his. He smiled, closed his hand around hers and, bringing their clasped hands up, let her twirl before he pulled her close.

And then, as she’d known would happen, sensation after sensation flooded her body—delicious shivers glided down her back, blood rushed through her veins, her heartbeat quickened, goose bumps covered her arms.

His nearness was overwhelming and did something to her, as she had discovered not so long ago when she’d danced with him during Caitlin and Don’s wedding.

Like his three brothers, David was tall, dark, and breathtakingly handsome. And like any other red-blooded female, she noticed and enjoyed looking at them.

But ever since she’d laid eyes on David for the first time, he’d managed to rub her the wrong way. Oh, hell, not rub—she had to think of another word. Rub had connotations of bodies close to one another, of intimacy, and just thinking of her body close to David’s…

She was carrying way too much baggage at the moment, baggage she wasn’t sure she’d ever be able to let go, baggage she’d been constantly dealing with over the past two years. Ever since every newspaper in the country had featured her father’s incarceration and subsequent suicide two years ago, she’d steered clear of any kind of relationship with the opposite sex.

The fact David used to be an investigative journalist put him in the category of stay-as-far-away-as-possible. True, he wasn’t a journalist any longer, but he would probably know all there was to know about her dad’s alleged involvement in a Ponzi scheme. As she’d gathered during numerous Sutherland get-togethers David had also attended, he was still very much interested in news that made headlines.

Relax around David Cavallo? Not likely.

The last thing she wanted was for him to find out anything more about her life. He had this way of looking straight into her very being, as if he could read her mind, and she didn’t like that. On the night she’d met him, she’d told herself to ignore the instant attraction. She’d told herself a thousand times he was way too attractive for his own good and not someone she wanted to get involved with. Trouble was, when she was this close to him, it was very difficult to remember her resolution.

Desperately, Dana looked around them, hoping to catch someone’s eye who could interrupt the dance. But everyone else seemed to be having a good time. Every single Sutherland sister was staring up at a Cavallo brother, and their lively romance-writing mother was looking on, beaming.

How long can one dance be? The music seemed to go on forever. David was a wonderful dancer, but she didn’t want to be this close to him, didn’t want to be so aware of the heat his body was radiating, of the hard muscles underneath her fingers, of his intoxicating, all-David smell.

She closed her eyes, hoping to find some kind of balance, but with her eyes closed, her other senses only became more sensitive, picking up the hitch in his breath, the erratic beating of his heart, the warmth of his hands on her naked lower back.

He pulled her closer and steered her toward the big doors that led onto a wide veranda overlooking the beach. She stiffened but noticed other couples were also dancing out there and she relaxed. Slightly.

An Irresistible Temptation is available in the following formats: 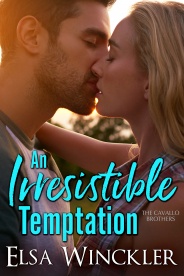 Did you know that An Irresistible Temptation and many titles are available digitally from Tule's own bookstore? Check it out!