With her sister facing the gallows, she risks it all… even her heart

Legendary Scottish laird and warrior Reid Douglas has never met his match on or off the battlefield until Lucy Livingston – his bride-to-be. Lucy is no meek maiden content to stay at home. She’s trained in the art of war and is determined to destroy the king Reid has vowed to protect with his life.

Lucy doesn’t want to wed the handsome, brawny laird, but it is an excellent cover she can use to get close to the king, who is engaged in a campaign to rid Scotland of witches. Lucy must protect her sister from enemies who know an accusation of witchcraft, no matter how tenuous, is a death sentence.

They should be sworn enemies. But Lucy can’t deny the sparks that fly whenever she vies with her husband in and out of their bedroom. And Reid finds his wife’s spirit intoxicating – making him long for more than war. Can two opposing warriors find peace in each other’s arms?

Marriage was not about love, Lucy Livingston reminded herself as she took aim at her target and with trembling fingers let her arrow fly. Marriage was about social position and connection, as her father had reminded her not a quarter of an hour ago.

The arrow hit the target with a satisfying thwack at dead center. Her satisfaction slipped into despair with the next beat of her heart. Even nervous, she could perform the evil deed that was being thrust upon her. Lucy squeezed her eyes shut, forcing back her tears and her desperation.

As a child, she’d learned even family was not about love. At least not her family. When two daughters had been born instead of two sons her father had distanced himself from the women in his life. Lucy tried to change his mind, tried to win his affection, even going so far as to teach herself how to fight with a quarterstaff and a bow—just as a son might in order to protect his family. But nothing Lucy did changed her father’s attitude toward his wife and daughters, especially when he discovered his youngest daughter, Esme, had an incurable affliction.

A lack of love and attention had taken their mother from them two years ago—a reality their father failed to acknowledge. The only thing that garnered any attention from the man at all was money, and their current lack of funds.

In fact, it was her father’s staggering debt that had allowed Lucy to be preyed upon by an outsider, forcing her to do things she would never consider in an effort to save the one person who mattered most—her sister.

Pain for the life she would never have pierced through Lucy as she silently prayed for a miracle to deliver her from her current predicament. She took a deep breath and opened her eyes to see her maid advancing on her position in the field beyond the courtyard of Skirling Castle.

“There you are, mistress,” her dark-haired maid called. As Davina came closer, Lucy could see the flush in her cheeks and the worry in her dark eyes. “Your father is looking for you. He wants to leave for Redhouse Castle with all due haste. He’s growing angry with your delay.”

“My apologies, Davina, if he took his anger out on you. I needed a moment.”

The maid’s gaze moved to the bow in Lucy’s hands. “I can see that. Did target practice help settle your nerves as it usually does?”

“Not this time,” Lucy replied honestly. The carriage that would deliver her to her betrothed stood in the courtyard, waiting, beckoning her toward that new life. But could she do it? Could she step inside and allow herself to be driven not by love, or social position, or even connection to a new home? If she did, it would be her love for her sister that set her on her way and would force her to turn against everything she believed in.

Lucy recalled the night the king had betrothed her to one of his men. It was not unusual to be forced into marriage by the king. In fact, such an event should have been a blessing for a girl such as her with limited financial means. But any joy Lucy had thought she might find with Laird Douglas had been stripped from her on the night of her betrothal.

A stranger in a hooded cloak had invaded the bedchamber she shared with her sister Esme. With a touch of his hand against Esme’s chest, he sent her sister into an apoplectic fit. As Lucy held her shaking sister, trying to comfort her, the gravelly-voiced assailant had delivered his message. He knew of her marriage agreement with Laird Douglas. He knew of her skill with a bow and arrow. And he knew of Laird Douglas’s connection to the king as one of his elite guardsmen.

“Through your husband, you will get close to the king, and you will kill him either with an arrow, or by some other means.”

Esme’s weak, pitiful cries wrenched Lucy’s soul as her sister came out of her fit.

“You will do as you’ve been bid, or the next time I force your sister into a fit it will be in public. I will accuse her of being a witch and possessed by evil spirits. She will be arrested, tortured, and killed. Is that the end you want for your sister after so many years of protecting her?”

Lucy had looked down into Esme’s still-glazed eyes, feeling tears well in her own. Esme had already suffered enough in her short life due to her disorder and the lack of their father’s love. Lucy could not, would not, inflict anything more upon her sister, not if she could do something to stop it.

But murder? Could she murder an unsuspecting monarch and then be put to death for her part in that plan?

“Why do you want the king dead?”

The blackmailer bristled. “You are a woman and have no need for such knowledge.”

Lucy lifted her chin. The man’s words grated, sounding like something her own father might say. “If that is true then why not find a man to do your bidding?”

“How dare you?” The dark stranger’s voice was incredulous.

“If I am forced to do something so evil, I have a right to know.”

A section of his dark moustache twitched in the shadow cast over his face by the night. “The king’s government treats Catholics unfairly. He should change the laws, but since he will not, it is up to us to change the king.”

Lucy knew King James had enacted laws that forbid Catholics from practicing their religion in Scotland. “There must be other ways to appeal to the king?”

“The damage is already done. Many Catholics have already died, labeled as witches and warlocks, in an effort to rid the country of any challenges to the king’s Protestant faith.”

Lucy stared coldly at the man. “You will do to Esme what King James is doing to other unfortunate souls?”

“We will do what we must to you, your sister, and anyone else in order to secure the future.”

“I will be tried for treason and hanged for murdering the king.” Lucy pressed her lips into a tight line. “I will forever be known as an infamous traitor.”

The man shrugged. “If you get caught, that will be your end.”

“What will become of Esme? Who will care for her when I am gone? My father will not. And I will never agree to this scheme unless you give me some guarantee she will be safe.”

“I can see that she is sent to Inishail Convent. She will be cared for there.”

Lucy frowned. “Why should I trust you? You broke into our home, tortured my sister by forcing her into a fit, and have threatened both of us with harm if we do not do as you demand.”

“You will have proof of what I say before you leave for Redhouse Castle. You have my word.”

Two days later Lucy had received a letter from the abbess of Inishail Convent agreeing to send for Esme and protect her should anything happen to Lucy in the future.

With a commitment to protect Esme secured, Lucy had no other choice but to do what the stranger had asked of her.

As the memory faded, Lucy handed Davina first her bow and then her quiver. “Make sure these are packed in my trunk. I will be needing them.”

Romancing the Laird is available in the following formats: 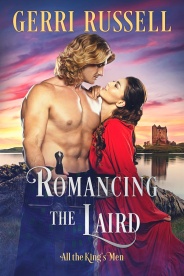 Did you know that Romancing the Laird and many titles are available digitally from Tule's own bookstore? Check it out!