Men of the Marvell Ranch, Book 3 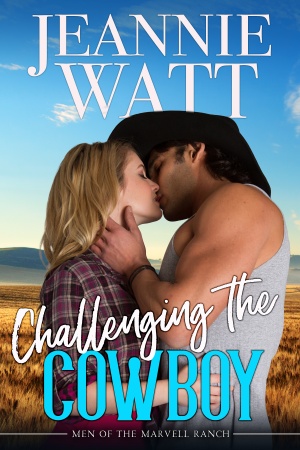 Men of the Marvell Ranch, Book 3

Zach Marvell’s word is law on the ranch — or it was until she showed up.

Zach Marvell’s been running the family Marvell Ranch without interference since he was fifteen, but when Finley James arrives for her sister’s wedding and proceeds to ask questions, give advice and tell him a few unpleasant facts about himself, he’s annoyed. And then intrigued.

Horse trainer Finley James has been perfectly happy floating from job to job until her parents sell the family ranch in Nevada and she no longer has a safety net. She’s not worried as she’s landed a job at a top horse training facility, but that lasts less than a week when Finley, who’s never held back her opinions, tells a wealthy client a truth he doesn’t want to hear. Hat in hand she returns to Marvel Ranch hoping Zach will give her a short term job until she can figure out her next move. Finley knows promising to not interfere or makes waves will be tough.

Who knew keeping her hands and her heart to herself would be her biggest challenge?

Finley James had no excuse for letting her focus stray from the gorgeous mare circling the round pen to the guy putting her through her paces. She was a horse trainer, not a man-ogler, but she couldn’t help studying the rider—and it wasn’t because she was watching his technique. Tall in the saddle and ridiculously good-looking, his angular features were set in an expression of supreme concentration, his body moving fluidly with the horse. Oh, yeah. He was something to behold. The mare was nice, too.

She blew out a silent breath as her sister’s future brother-in-law, Zach Marvell, took the mare through a series of figure eights. His hands were light on the reins, but the horse, despite her dainty carriage, was slow to respond, and Finley didn’t think it had anything to do with the abilities of the man in the saddle. The horse was beautiful but pigheaded. Headstrong. And, from what her sister had told her, the beautiful guy on top was the same.

Not that Ella had one bad word to say about Zach Marvell. No. She admired the guy. Had explained more than once about him taking over the family ranch at the age of fifteen after his father had been killed in an accident and his mother was too distraught to properly run things. For over twenty years he’d been at the helm of this place, and Finley imagined that in that twenty years, he’d become something of a dictator. She’d only been on the Marvell Ranch for four or five hours, having arrived around breakfast time for her sister’s wedding in two days, but already she’d seen how Zach’s brothers and Brandon, the single remaining ranch hand, snapped to whenever he gave an order.

The horse was not doing the same.

Finley’s fingers curled around the cool metal rail of the round pen and she brought her chin down to rest on the back of her hand as she watched man and horse test one another. Ella and her fiancé, Shane Marvell, were on the opposite side of the pen, standing several yards back to stay out of the dust the wind was blowing their way. The horse flicked an ear at her as she cantered by, then, in a move that surprised even Finley, who was used to horses doing the unexpected, she suddenly planted her front feet, jarring Zach forward. The instant he was off-balance, she executed a series of energetic high twisting bucks worthy of any rodeo arena.

Zach hit the ground hard and the horse continued to buck her way around the corral before stopping on the opposite end. She shook her head at Zach and blew loudly through her flared nostrils. Slowly Zach got to his feet. He didn’t bother dusting off before approaching the horse, who started backing away from him. He raised his hat, sent the horse around the corral at a full gallop, establishing dominance before stepping to the center as the horse circled the pen.

“Guess this was one for Shane to ride.” Finley turned to see the middle Marvell brother, Cody, approaching from the direction of one of the ranch shop buildings. Finley smiled. She liked Cody.

“No, thank you,” Shane called back. “My bronc-riding days are over.” He looped his arm around Ella and pulled her a little closer. Ella had met Shane while traveling the Montana rodeo circuit the previous summer, researching risk behaviors in rodeo competitors. Upon meeting Shane, she’d decided to take a few risks of her own—finally.

In Finley’s opinion, she’d landed a decent guy. He was just wild enough to be interesting, but had every intention of putting down roots. Ella had always needed roots and security, unlike the rest of the Etxeberri family, which Finley’s mother had married into while Finley was a baby. She was born a James, but her father had disappeared from her life when she was two months old, so she’d been raised an Etxeberri—which meant she was adept at all forms of ranch work and risk taking.

Ella not so much. She was like a foundling in that regard, preferring her studies to the adrenaline-pumping activities her siblings indulged in. But differences aside, Finley loved her sister fiercely, so it was lucky for Shane that he’d passed muster.

After several minutes of circling, Zach caught the horse, calmed her, then swung back up in the saddle. Finley’s breath caught. The guy was beautiful in his movements. A gorgeous autocrat. Someone who would benefit from being taken down a notch or two. If she hadn’t been on her way to her dream job in Wyoming, she might have volunteered for the task, because she enjoyed that kind of thing. Nothing like a good battle of wills to get the blood pumping.

Not that Ella would let that happen. Ella was all about peace and harmony, while Finley liked her life to be interesting…although, she had to admit that recently it had gotten interesting in a way she was still struggling to accept.

She lifted her chin from her hands as Zach dismounted.

Was she getting old?

No. Getting old wasn’t the problem. Accepting the fact that she, who’d always thought she was performing without a net, had been counting on a net more than she knew—that was the problem.

Challenging the Cowboy is available in the following formats: 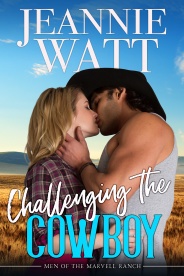 Did you know that Challenging the Cowboy and many titles are available digitally from Tule's own bookstore? Check it out!