Working cowgirl, Payton Hollis, has no time for hairdryers, heels and helplessness. She must save her home, Beargrass Hills Ranch. She also has no time for men. She already is boot-deep in blue-eyed cowboy trouble.

City-boy, Cordell Morgan, isn’t who he seems. His fancy suit and slow smile hide dark secrets. Secrets as to why his hands are callused, why he never stays around and why he has really come to Marietta, Montana.

Between a shrewd old rancher, a cantankerous rodeo horse and a stud bull called Trouble, Payton and Cordell have no chance to lead separate lives. No matter how much their futures may depend upon them doing so.

Can a sassy cowgirl lower her guard for a man who will soon be gone? And can a man who believes emotions are nothing but a liability take the ultimate risk?

The next time Payton Hollis went to a wedding she’d wear boots.

Her work-roughened fingers fumbled with the delicate clasp of her sky-high sandal. “Dammit.”

It would be Christmas before her foot slipped free from its candy-pink prison. She chewed the last of the gloss from her bottom lip and glanced at the prone body of the newborn calf on the other side of the wire fence.

She pulled hard at the diamante buckle winking in the late afternoon sunlight and the clasp finally surrendered. Her sigh of relief blew the strands of brown hair out of her eyes. The next wedding she went to she’d also wear her hat.

Payton tossed the sandal to join its partner on the battered passenger seat of her pickup and rummaged around for her old boots. Her favorite pair had split above their worn heels and she’d stored them in her truck for when she found the money to fix them. They’d been there a while.

She pulled on the soft leather and her feet sighed. Mandy Wright could remind her a thousand times what a bargain the strappy pink sandals were but next trip to Marietta she’d donate them to the thrift store they’d found them in.

The dry autumn wind tugged at her loose hair as she slid into the driver’s seat. Through the dusty windshield, the rugged Absaroka mountain range pushed out of the rolling green foothills of Paradise Valley. She only had to look a little to her left to see where the green faded into a parched brown. Her great-grandfather may have named their ranch after the local white conical wildflower but no flowers, let alone grass, swayed in the breeze. Beargrass Hills Ranch had missed all the spring storms as well as the summer squalls. The prairie was bare, the cattle hungry and her water supply critical.

She turned the ignition key. She’d swing out across the road, back up to the fence and lower the tailgate so she could jump from the platform over the fence. The truck engine idled as she waited for a silver car to pass.

Out her side window, Payton checked on the black Angus cow suckling a tiny calf. When she’d left for Eliza’s wedding she’d known the cow would calve that afternoon but if she’d known she’d deliver twins, she’d never have left her alone. At least the twins had arrived safely and one of the newborn calves was doing okay. It wasn’t uncommon for the second calf to be rejected and Payton had a few tricks up her cowgirl sleeve to ensure the calf would survive. But before she could do anything she had to get the calf to the barn and make sure the little critter had a feed of antibody-rich milk.

Her thumbs tapped on the steering wheel as the silver car drew closer. “Move along,” she muttered as the glossy sedan slowed, “there’s nothing to see here.”

Her stomach grumbled as she breathed in the rich aroma of the plate of foil-covered prime ribs safe on the floor of the truck. Her early lunch was little more than a vague memory. When she’d told Eliza she was worried about the cow and couldn’t stay for the reception held at The Graff Hotel, her kind-hearted friend had organized a plate of food for her to take home. She smiled. Seth was one lucky cowboy and Eliza was one happy cowgirl.

Payton’s smile died as she stifled an unexpected pang of loneliness. Where had that come from? The joy shining in Eliza’s eyes as she’d said her wedding vows must have affected her more than she thought. She had no time, or room, in her life for a man let alone to feel lonely. She had her friends, ranch and cows. That was all she needed, wasn’t it?

The male driver pulled off the road and parked the silver sedan on the verge. She released a tight breath of frustration. Now was not the time for some bored wedding guest to make a stop on their scenic Montana tour while the bride and groom had their photographs taken. She had a calf to feed and then re-mother.

Payton switched off the engine. She’d fielded her share of curious questions when her father had turned Beargrass Hills into a dude ranch during her teens. She rolled down her window. She’d dig deep into her well of zen calm and send the out-of-towner on their way.

A broad-shouldered and lean-hipped figure uncurled himself from the driver’s side seat. She briefly closed her eyes. City-slicker. Then she took another look. This man might wear fancy shoes and a tailored suit but there was nothing soft about the hard line of his jaw or the swagger in his stride.

“Everything okay?” he asked, his deep voice low and slow as he reached the truck’s open window. He pushed his designer sunglasses onto the top of his short, dark hair.

Payton stared into blue eyes as clear as a spring-fed summer lake. For an endless second the world fell away before the breeze carried the scent of high-end aftershave and reminded her she already had more than enough blue-eyed masculine trouble.

From long practice, she held his gaze. First impressions were created in ten seconds. This wedding guest needed to see past her fine bones and small size to her strength and capability. She’d fought hard against the genetic card she’d been dealt. Mandy might envy her petite figure but she refused to be treated as though she were spun from fragile glass. She was as tough and as able as any man.

The stranger’s eyes narrowed. She didn’t look away.

“So you don’t want any help with that lone calf over there.”

She blinked. Since when did a businessman notice abandoned calves.

“Are you sure?” She didn’t know if it was the slight drawl to his tone or the quirk of the corner of his mouth that caused her breath to catch. “Because I’m sure pink cocktail dresses aren’t in a cowgirl’s manual of what to wear when jumping over a barbed wire fence.”

Despite herself, she smiled. Funny as well as gorgeous. Mandy had sure missed this guest at the church when she’d bemoaned the lack of fresh eye-candy.

She clipped on her seat belt and glanced at the strapless and flimsy dress that was as impractical as a show pony in a barrel-race.

“So would that be the sassy and modern cowgirls’ manual? Because on page three it clearly says anything pink goes. Now if you don’t mind, I have a calf to rescue.”

The man dipped his head and grinned. “Be my guest.”

Her gaze lingered. She had the strange impression he’d look right at home doffing a cowboy hat.

“Enjoy your visit to Montana and … thanks for checking everything was okay.”

His blue eyes crinkled at the corners. “Don’t mention it. And you’re not getting rid of me just yet. You’ll need a hand to back your truck.”

Before she could say she’d backed trucks for almost as long as she’d ridden horses, he strode over to the fence and waited for her to swing the truck into position. She refused to look at him as she reversed. No matter what life threw at her she wasn’t a helpless damsel in distress. She didn’t need help. Period.

Despite her best intentions, she snuck a quick look as he waved at her to continue reversing. She’d seen plenty of attractive masculine profiles from her two years at Montana State University, there was no reason for blood to rush through her veins and render her light-headed. She really needed to eat.

“Whoa,” he called out even as she applied the brakes.

Chin tilted, she quit the truck. Show time was over whether this man liked it or not. He needed to head to Marietta and then over the mountain pass to Bozeman to catch whatever chartered jet he’d arrived on.

From the corner of her eye, she caught a glimpse of charcoal-grey and white as he leaped over the wire fence. She swung around only to see that he’d thrown the canvas horse rug from the back of the truck over the barbed wire and that his jacket and tie now hung from the side of the truck.

She ground her teeth.

The city-stranger had let the fresh air of the Big Sky Country get to him and now relived his Boy Scout days. He’d no idea what a dead weight a calf could be. It didn’t matter if the fine weave of his white shirt stretched over the taut width of his back, his gym-honed muscles weren’t built for country life. It would be her luck he’d pull a muscle and then how was she going to get him over the fence? Her other good friend, Trinity Redfern, might relish any opportunity to get up close and personal, but Payton had a ranch to run and no time to indulge her hormones.

“Thanks,” she shouted, “I’ve got this.” But the north wind stole her words.

Muttering beneath her breath, Payton let down the truck’s tailgate. The capricious breeze whipped hair across her cheeks and lifted her lightweight dress. She muttered again, caught the hem before it made it past her thighs and tied a firm knot to ensure the full skirt wouldn’t balloon upward again. She couldn’t give Trinity back her impractical dress quick enough.

She turned to see the man heading her way. He’d rolled up the sleeves of his shirt and his strong arms easily carried the calf. His lips curved as he spoke soundless words of reassurance. The wind mussed his neat hair and his shirt gaped to reveal the tanned, strong column of his throat.

A fleeting memory teased her subconscious. The white flash of his smile reminded her of someone. But as he neared the fence and lifted the calf over the rug-covered wire and onto the tailgate, the memory fled. She took hold of the calf and eased him into the truck.

“Easy,” she crooned as the calf struggled. She’d wrap the horse rug around his vulnerable body. She reached for the horse blanket on the fence at the same time as the stranger. Their hands tangled. Her eyes flew to his.

It didn’t matter that he wore an expensive suit or drove a town rental car, she’d felt the calluses on his palms. She’d wager a new pair of boots. This man was no city-slicker.

He was a cowboy.

Cherish Me, Cowboy is available in the following formats: 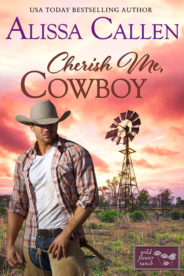 Did you know that Cherish Me, Cowboy and many titles are available digitally from Tule's own bookstore? Check it out!