He’s got the ranch, the boots, the hat and even a few head of cattle, but everybody in Marietta, Montana, knows the former golden boy of Marietta High is a wealthy politician, not a cowboy. And even though that nasty scandal in Helena might have knocked him down a notch or two in the polls, what kind of a fool would trade access to the halls of power in Helena and a Harvard law degree for a ranch in western Montana? Possibly one whose new neighbor, Serena James–the woman the guys at Grey’s Saloon call “…the Red Hot Llama Mama”–makes him start to think about what he wants out of life, instead of what’s expected of him.

Serena James knows trouble when it hops her fence–

Moving to Montana and deleting her blog seemed like the perfect solution to her online stalker problem. Serena’s ready for a fresh start, but when her escrow on her ranch falls through, she has to scramble to find an immediate but temporary safe haven to rent for her herd of 50 alpacas, two llamas and one giant dog. Serena’s barely moved in when Austen Zabrinski–the man her landlord called “my absentee ranch owner brother who lives and works in Helena”–hops the fence in need of a lift. Even at first glance, Serena can tell he’s nobody cowboy, but who’s to say that isn’t a good thing? A little tryst with her gorgeous, sexy, here-today-gone-to-Helena-tomorrow neighbor might be the perfect welcome to Montana.

The low rumble in Beau’s throat quickly escalated from suspicious question to full-on bark. The big, quaking woof of a Great Pyrenees who took his job of protecting hearth, home, and master very seriously was not something you ignored—even if you could.

“Is Jason here?” Serena James asked, abandoning the sloppy, icky mess of mucking out a stall filled with ancient… well, many years old… horse manure. She kept a firm grip on her flat-nose shovel, just in case the call to alarm involved a slithering vertebrate with rattles, and followed the big white dog to the open doors of the barn. “It’s about damn time.”

She’d been waiting over an hour for her recently hired high school helper to show up. She’d hung a ‘Help Wanted’ sign on a community board at the Marietta Library last week. Jason… she couldn’t remember his last name… had been the only call back so far.

“I need someone on Friday morning. I pay fifteen dollars an hours. Cash.”

Since school didn’t start until Monday, she figured she’d get some kind of response from kids who spent their wad at the fair and needed a buck or two. Jason promised to show up.

She turned her ratty, old ball cap—stolen from her brother, Peyton, years ago—bill forward again before reaching the bright sunlight. She’d worn it backwards to avoid banging her crown on the built-in feeding bins. Someone had taken good care of the animals at some point in the old barn’s life. She didn’t know who that person might be, because she’d only arrived in Marietta, Montana, a week and a half ago.

“Where is he?” She turned toward the road, squinting as her eyes adjusted from the gloom. “I don’t see a truck turning in.” She hadn’t heard an engine, either, but that wasn’t surprising given the fact she’d had the volume turned up on her snazzy, little, portable mobile speaker, which was tuned to the ‘Mostly Country’ playlist on her iPod.

The thick white hair on Beau’s back rose like a two-inch Mohawk. His gaze pointed her in the opposite direction. “Holy smokes. That’s something you don’t see every day.”

A person. On foot. Crossing the open field beyond the gate that adjoined her farm’s property to her neighbor, a man she believed to be her landlord’s brother.

“You’ll probably never see my brother,” Paul Zabrinski mentioned when she signed the lease agreement. A year seemed fair and the price had been right since Paul deducted a generous amount for feeding and watching over his five horses. “He’s an absentee landowner.”

Serena watched the man striding as if on his way to conquer his next piece of the known world. Not a hired hand, she decided. Even in jeans, a pale blue shirt with rolled up sleeves, and boots, he gave off a sort of I’ve-got-money-and-attitude vibe.

She grinned at her presumption, but one didn’t grow up with hippie, off-the-grid parents without being able to spot the haves from the regular Joes, like her.

He paused to examine the lock—a combination type, and then climbed the fence with more grace than she would have guessed. His broad shoulders and athletic-looking ass made her hands tighten on the shovel handle. Her mouth went dry. She hadn’t run into a man like this in too damn long. He wasn’t her type, of course, but that didn’t mean she couldn’t feast on eye candy when it presented itself.

Beau looked at her, obviously questioning her opinion, but he settled into a sit, leaning protectively against her thigh.

“Hey,” the stranger called out the moment he spotted her. “Sorry to bother you, but my horse got spooked by a snake and I wound up on my ass.” He rubbed said hunk of anatomy and gave a slight wince. “Broke my phone, too. Can I make a call from here?” He pointed to the house.

“No land line, yet. Sorry. But you’re welcome to use my cell.”

She pulled off her right glove and fished her cheap burner phone out of her hip pocket.

The volume and depth of the bark made her visitor take a step back. “Big dog.”

“Beau. He’s been my protector his whole life.”

In Serena’s experience, which, granted, was limited, there were two kinds of men—those who made friends with strange dogs and those who ignored the strange dog out of fear or dislike of animals. This guy did something completely unexpected. He dropped into a squat—conveniently bringing his throat into range if Beau chose to attack—and looked Beau straight in the eyes. “Hello, big guy.”

He didn’t hold out his hand or try to pet the dog. He just stared. And waited.

“I’m Austen Zabrinski.” His gaze remained fixed on Beau, but Serena knew his words were meant for her.

“Serena James. I take it your brother is my landlord.”

You look nothing alike. She stepped back, afraid for a second she’d uttered the words aloud. She spotted a slight family resemblance in their facial bone structure, but Austen’s gaunt cheeks sported casually chic stubble—the kind made popular by pop stars and big screen heartthrobs—and his blue-green eyes shared none of his brother’s cheerful, positive candor. This man spoke from his mind, not from the heart.

He stood—no grunting, no wincing, no complaining because his knees were shot—each a complaint she’d heard at one time or another from her previous boyfriends.

“Thanks,” he said, taking the phone.

Their fingers touched. Was it possible to exchange something as a small and slim as a phone without touching, she wondered the instant a charge of warm sizzle shot through her hand and up her arm?

She nearly dropped the phone, but he grabbed it securely.

“I don’t want to break another.”

Another what? Phone? Or heart? With looks like his, the man should have the word ‘Heartbreaker’ tattooed on his forehead.

He fiddled with the phone a moment, his long, beautifully manicured fingers dancing across the keypad. An all-female reaction—the hot, damp, tingle type—took place, leaving Serena bemused. She’d put her love life on hold after her last epic fail of the dating kind. And at the moment, she didn’t have time for men, dating, sex… and all the emotional drama that came with each of those things.

Nope. She had fifty-four sweet souls under her care, counting Gandhi and Dolly, her llamas, and Beau and Brutus, her dog and cat, respectively. The last thing she needed—or wanted—was the complication of a man in her life. And one didn’t need to be a Great Pyrenees to spot a dangerous complication when it hopped over their fence.

Montana Cowboy is currently available in digital format only: 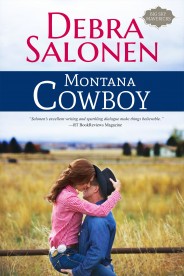 Did you know that Montana Cowboy and many titles are available digitally from Tule's own bookstore? Check it out!