The Maidens of Marbury, Book 3 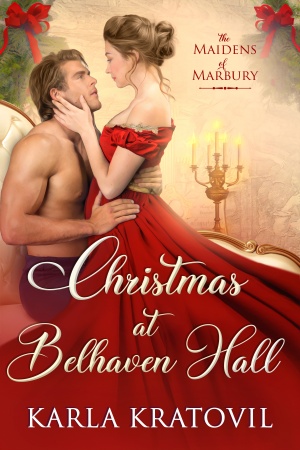 The Maidens of Marbury, Book 3

She wants nothing to do with him or the holiday frivolities…

Lady Olivia Rivenhall has always lived at Belhaven Hall. A year has passed since her husband’s unexpected death, and she’s been living in limbo wondering when she will have to vacate her home and finally decide what to do with the rest of her life. Just as she is beginning to believe that the new earl will never come to take possession of the manor, Maxwell Drake walks back into her life.

After almost dying in a gutter in Venice, Maxwell Drake vows to turn his life around. Learning that he’s inherited his estranged cousin’s title is exactly the fresh start he needs. Max is looking forward to enjoying Christmas in the English countryside at the estate he’s missed, but he’s dreading facing his cousin’s widow, the only woman he’s ever loved.

The attraction is stronger than ever, but so are the wounds. As Christmas magic steals through the ancient halls and secrets beckon to be shared, can these two lonely hearts find a second chance at love?

Maxwell Drake lay staring up at the blanket of stars above him and groaned. He tried to suck in a breath of humid air, but the searing pain that tore through his side froze the breath in his lungs. Had the stiletto Gus stabbed him with punctured a lung? He slid a hand slowly up to his left side and gently probed the spot. His fingers gleamed wet and red in the moonlight. His right shoulder throbbed, and he tried to move his arm to a more comfortable position, but it refused. It had to be dislocated. He cursed through swollen lips.

The night had started out promising, with plans to attend a masquerade party at Duka del Loredan’s grand house. The party always included fine wine and beautiful women, and tonight, a concrete deal for the Vasari. That painting would have made him enough to pay off his bills and travel to Paris to visit his mother and sisters. He was done with this city. He gritted his teeth through another sharp blaze of pain as he breathed in and out. It appeared Venice was done with him as well.

He experimentally stretched his legs, bending each at the knee and carefully rotating each ankle. Everything worked; nothing seemed broken. However, the bruises would no doubt ache by morning if he lived that long. He blinked rapidly as the stars went blurry with tears. He tried to lever himself to a seated position with his good arm, but the movement caused a tearing sensation in his left side, and he fell back to the street with an anguished cry. Then, breathing carefully through his nose, he concentrated on the sky. A long thin cloud blew across the stars like a wispy wraith.

Max sent up a prayer to the heavens. Please, God, don’t let me die here in the gutter. If you deign to save my life, I promise to turn over a new leaf. I will go straight and find a respectable job, love my neighbor, and all that. Just give me a chance. I can turn my life around.

He lay there for a long time, still as a corpse. Perhaps God didn’t listen to the prayers of thieves and charlatans. Then a whistle blew into the night, two short and two long blasts. Max gathered all his waning strength, and using his good arm, he raised it into the air, ignoring the pain. “I’m here, Assan,” he called out.

Max cracked his eyes open slowly. Sunshine streamed through a window and seared his eyeballs. He closed the lids and flung his right arm over his eyes. Searing pain raced up his side, and he yelped at its burn.

“Don’t move too much, my friend. You are barely alive as it is.” Assan’s gravelly voice came from across the room.

Max cracked his eyelids again and dared to turn his head toward the sound. Assan sat in a chair, with one ankle crossed over the other knee and a newspaper in his lap. They were in a strange bedroom, the dark wood walls and green velvet-covered furnishing unfamiliar. Max tried to speak, but his mouth felt stuffed with cotton. He darted his tongue out to lick his cracked lips.

Assan stood and crossed to the nightstand and poured a cup of water. He brought it carefully to Max’s lips. Max drank greedily and immediately felt better. “Thank you, my friend, for finding me. For saving my life.”

Assan nodded his head; his dark eyes were solemn. “We are even.”

Max nodded in return. Five years ago, he had saved Assan from a blood-thirsty mob at an open market in Cairo. Somehow Assan had accidentally insulted one of the dealers. Asking poorly in Sa’idi to purchase the man’s daughter when he actually wanted to purchase a gold watch. They were indeed even. “Can you help me sit up, please?”

His friend frowned. “Are you sure?” At Max’s nod, Assan slipped his hands under his armpits and hefted Max up to lean against the headboard. Then he piled two pillows behind his back. It hurt, especially under his right arm, but Max felt much improved sitting upright. He looked down, long coils of white linen strip wrapped around his chest. “I was sure he had punctured my lung with that blade.”

“The surgeon said you were fortunate,” Assan replied. “Whose blade?”

“Gus and his gang of thugs.” Max ran a hand down over his face. “They ambushed me on the way to the party. There were too many of them to fight off.”

“Gustav Benelli is a dangerous enemy. He has been jealous of you ever since the Finola deal. Will you go to the polizia?”

“And what? Tell them that the stolen painting I procured for the Duka del Loredan was stolen from me? Do you think the Duka will vouch for me?” Max shook his head. The powerful elite didn’t muddy their hands with the politics of the underworld. No doubt, Benelli had already sold the painting to Loredan. The Duka only cared that he received the item he wanted, not who sold it to him. Max leaned his head back and closed his eyes. He was so tired.

“Would you like something to eat? You have been subsisting on broth while you were in and out of your fever.”

Max opened his eyes. “Yes, please.” His stomach growled loudly in response, making Assan chuckle. His friend went over to ring the bell for a servant. “Where are we?”

Max grimaced. “Thank you again. I know how hard it is for you to deal with your family.”

“I couldn’t take you back to your house.” Assan shrugged. “Plus, you needed a surgeon. When my father calls for a surgeon, everyone scrambles to do his bidding.”

A knock at the door pulled their attention away from the delicate subject of Assan’s family. A maid stepped through the doorway with a tray of food. The smell of cumin, cinnamon, and meat reached Max’s nose. His stomach let out another loud rumble. Assan took the tray from her, and she shuffled back out of the room.

“My mother insisted they have something hot ready for you when you woke. She says this stew feeds the blood. Trust me; you need it.”

Once the tray was set on his lap, Max wasted no time tucking into the bowl of stew. His shoulder ached, but the pain did not deter him from the delicious food.

Assan sat in the chair he had previously occupied. He frowned. “I went to your house. The entire place had been ransacked. That is why I was out looking for you.”

“Goddammit,” Max exclaimed around a mouthful of food.

“Your housekeeper wasn’t home; she was visiting with her sister.”

Max nodded. “I gave her the night off.”

“I went back yesterday, and she had already put the house to rights. She gave me some clothes for you and a stack of correspondence that arrived a couple of days ago.” Assan stood and went over to the desk to retrieve a stack of mail. “You’re welcome. I’ve become your errand boy.”

Max grinned at his friend’s sour expression. He’d finished eating and exchanged the food tray for his mail. Funny that his housekeeper had thought to send it to him, you’d think that reading his correspondence could have waited until after he wasn’t mostly dead. The first letter on the top was from his mother. Ah, well, that explained it. Signora Rossi believed family was of the utmost importance. He flipped past the letter and through several more when one caught his eye. The return address was London, Knightsbridge & Sons. He sliced the seal open with his thumb and unfolded the parchment. It was dated three months ago.

We must impart the sad news that your cousin, the Earl of Rivenhall, passed away on the tenth of December. We have had some difficulty ascertaining your whereabouts, which is why this missive is delayed in reaching you with this terrible news. You are the next line to inherit. Please respond immediately with the date of your planned return to England. Your presence is required for the inheritance and entailment to be properly transferred.

“You look as though you have seen a ghost.” Assan looked over with concern.

Max shook his head. “I have. My cousin Henry died last December. They had trouble reaching me.”

“I’m sorry to hear your news, my friend.”

Max stared down at the words on the page, shock melting into sorrow. Henry was dead? How could this be? The message was annoyingly brief, lacking in any details about what had happened to his cousin. The message began to sink in. You are the next line to inherit. He took a deep breath in then hissed at the sharp pain that tore through his side. How could he be the next earl? He could never fill Henry’s shoes. His thoughts raced back to the other night, the fight, the beating, lying in that street bleeding, gasping for breath. He closed his eyes. What had he become?

Six years ago, he had left behind his job at the Louvre to join his father dealing in stolen art and artifacts. Father had pressured him to come into the business, and Max, feeling betrayed and angry by the woman he’d loved, had thrown all his carefully laid plans aside. He ran a hand down over his face and looked again at the letter in his lap.

Henry’s heir. A chance to start over. A chance to be someone different, respectable. His desperate prayer to live another day had been answered. In return, he owed God a promise to be a better man.

Christmas at Belhaven Hall is available in the following formats: 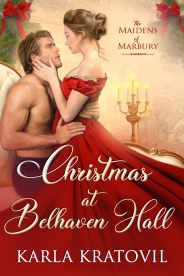 Did you know that Christmas at Belhaven Hall and many titles are available digitally from Tule's own bookstore? Check it out!