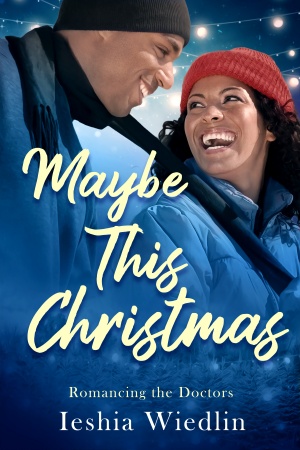 Maybe this Christmas she’ll unwrap what she really wants…

Angela Miles is a hardworking mom, doing everything she can to make sure her family traditions endure with her twelve-year-old son, David. Before her husband passed, choosing the Christmas tree on the first day of December and creating magazine-worthy decorations meant the world to them, and she can’t let these memories disappear. But this year, she’s also in the midst of planning a blowout gala for her nonprofit, Acts of Faith, and David is more into Chicago Bulls games with his friends than hanging out with her.

Dr. Shawn Atkins is a pediatric surgeon devoted to staying the best in his field. But when an opportunity arises to help Angela with the gala, he jumps at the chance to be her knight in shining armor. Angela has always challenged him to up his game, so he’s happy to help her out. What he’s not prepared for is how that decision turns his whole world upside down.

This Christmas, will new experiences open the door to a chance at love that neither of them is expecting?

Angela couldn’t believe her best friend Amina’s big day had finally arrived. After all the planning, organizing, and meeting after meeting, here they were. Angela walked up the stairs of Nathan Moore’s parents’ home to deliver a note. Amina had spent half the night writing a letter to her soon-to-be husband, and she was determined to make sure Nathan got it.

“Angie, please?” Amina had pleaded when they pulled in front of the massive home.

“Did you get any sleep?” Angela had asked.

“Very little, but I need him to get this. And can you give me a sneak peek of how he looks?” Her friend giggled.

Angela was more than happy to fulfill her maid of honor duties and deliver Amina’s note. Plus, she needed to check on her son David. Sure, he was twelve and behaved as if he knew everything there was to know about everything in the world, but Angela wanted to make sure he put on his tux properly.

“Are you guys decent?” Angela yelled about halfway up the stairs.

“Come on up!” Nathan’s friend Chris called out.

“Angela!” All the guys shouted once she made it to the landing of the second floor.

She gasped and held her hand to chest. “Hey, guys.”

“Angela, you look great!” Chris said and gave her a kiss on the cheek.

“Thanks, Chris. So do you. Everyone looks really great. Amina will be very pleased.” She chuckled. “Where’s David?”

Angela looked just over Chris’s shoulder and saw him. There stood her twelve-year-old son looking so handsome in his little tuxedo. He bounced with excitement to stand up in his first wedding. Angela saw flashes of her deceased husband standing in front of her.

“David, you did such a great job getting yourself ready.” She stood back and took a few pictures of him. He looked so grown-up; time was just flying by.

“Thanks, Mom. I was a little nervous getting ready, but I think I did it right.”

“You did, sweetheart. You look great. Where’s your uncle Nate?”

“He’s in his bedroom across the hall finishing up,” David said, pointing to Nathan’s bedroom door.

“Great. Thanks! You better head on down. Naomi has the photographer taking pictures of the bridal party before the ceremony. See if you can get the rest of these guys down there, too.”

“Thanks, sweetie.” She gave her son a quick hug before he walked away to try to get the guys downstairs.

Angela walked across the hall to Nathan’s bedroom and knocked on the door.

“Hey, Nate. It’s Angela. I need to give you something from Amina.”

Nathan’s best friend and best man, Shawn, opened the door. He was breathtakingly handsome in his black tux with gold accents. He was clean-shaven, and his jawline looked impeccable above the collar of his shirt. His cocoa skin glowed while his dashing smile grinned when he looked at her.

“Hello, Angela,” he said with his deep, husky voice.

“Thanks, Angela. You look beautiful.”

She averted her eyes to avoid looking directly into his. Despite all of their sarcastic banter, she couldn’t deny how incredibly handsome he was. Taking on the full weight of his glance might’ve caused her knees to buckle.

“Everyone is downstairs for pictures before the ceremony. You should head down.”

“Cool, thanks for letting me know. See you down there, Nate.” He turned to give a fist bump and hug to his best friend before walking past Angela. She took a deep breath to inhale the sweet cedar scent.

Nathan grinned as he watched his friend leave.

“Not sure what that grin is for, so just stop.” Angela laughed.

Nathan put his hands up in surrender. “He’s right though. You do look beautiful.”

“Thanks, Nate. Amina wanted me to give this to you before everything starts.”

“I can promise you she’s not.”

“Wonderful! Thanks for bringing it to me.”

“No problem. It’s what maids of honor do.”

“How does she look?”

“See you down there, handsome.” Angela hugged Nathan and made her way back downstairs to get Amina settled.

The wedding ceremony was beautiful. There was not a dry eye in the room when Amina and Nathan had their first dance.

Angela was so happy for her best friend. But her mind couldn’t help but drift to the upcoming weeks of work ahead of her.

“Hey, Angie.” Amina sat down next to her friend.

“That’s gonna take some getting used to, but I feel amazing.”

“So happy for you guys. Truly.” Angela smiled. Her friend had made the right choice.

“Angie, I want you to know none of what happened today could’ve happened without your help. Thank you for everything.”

“Well, I am your best friend, so…” Angela hugged her friend and wiped a tear from her eye. She was so used to leaning on her friend to help her get through Christmas and New Year’s and now she was going to be gone.

“Angie, are you going to be ok while we’re gone?” Amina asked.

“I’ll manage, Mina. Don’t worry about me. I’ll miss you being here, but I’ll be ok. Did he tell you where he’s taking you yet?”

“He still hasn’t told me, and I’ve exhausted all of my guesses.” She laughed.

“I’m sure it will be amazing.” Angela smiled, fully aware of where Nathan was taking her bestie for their honeymoon.

She and Mina grooved to the music as it played through the spaciously heated and beautifully decorated tent. Shawn waved at their table as he walked by.

Amina arched her eyebrow, and a grin spread across her face.

“Mina…” Angela knew that look all too well.

“Well, Angie, I can’t help but notice how Shawn can’t keep his eyes off you tonight.”

Angela flung her head back in laughter. “Are you serious?”

“He could not stop staring at you when you were giving your toast. It was sort of obvious. Not sure how you missed it.”

“The whole room was looking at me, Mina.”

Angela shoved her friend’s arm and laughed. She tried to dismiss what she was saying, but she was well aware of how incredible Shawn looked the entire night.

The reception wound down, and guests started to leave. Angela knew Amina and Nate had a flight to catch, but they wanted to make sure they told everyone goodbye before they left. Angela hugged her friend and new husband and wished them well.

“You got this, Angie,” Mina whispered as she hugged her tightly. “Everything will work out fine. Trust me.”

Suddenly Angela felt the weight of everything that lay ahead on her shoulders. She wasn’t sure if she was ready for the long road ahead.

Maybe This Christmas is available in the following formats: 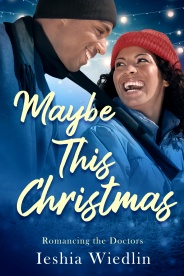 Did you know that Maybe This Christmas and many titles are available digitally from Tule's own bookstore? Check it out!