The Raffertys of Last Stand, Book 4 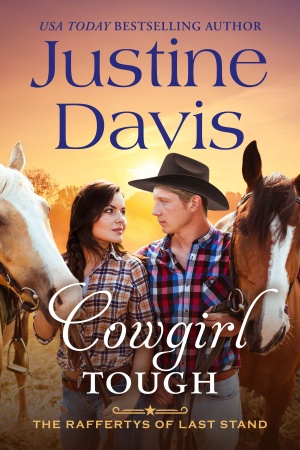 The Raffertys of Last Stand, Book 4

Sometimes the line between love and hate is blurry…

Cody Rafferty and Britt Roth may have grown up on adjacent Hill Country ranches, but they’ve always been oil and water. Britt knows it’s because Cody’s a tech nerd who doesn’t get the ranch life she loves. Cody knows it’s because Britt’s a single-minded cowgirl, who lives to complain about the technology he loves. Their families claim it’s because they were born within minutes of each other.

They’ve declared one truce in their lives—when Cody’s father was KIA overseas. Neither of them expected there would be another, but when Cody suspects a crash of his test drone spooked Britt’s champion barrel racing horse, endangering her life and future, he calls a second truce. Prodded by guilt, he steps up to take care of Britt and her beloved horse. Britt balks, but Cody’s hard to refuse even for a tough cowgirl. Forced together, they learn surprising things about each other neither ever knew.

Can these two lifetime adversaries learn to get along, especially when they realize that the sparks that fly between them aren’t fueled only by anger?

Cody Rafferty watched the computer monitor to his right intently. He had been focused on the center one, tweaking yet another setting he hoped would help in his seemingly never-ending quest, but then movement on the other screen had drawn his attention. And once he’d seen what—or rather who—it was, he’d shoved the rest aside.

The rider was still some distance from the hovering camera. But he didn’t have to see her face, or even the long flow of near-black hair to know it was Britt Roth. He could tell simply by the easy, confident way she sat a horse. He’d grown up seeing her ride, and later compete, and it was always the same; they appeared an inseparable unit. Sometimes he couldn’t even see the commands she gave, with either reins or legs, yet the horse did what she wanted, be it rounding up others of its kind or doing an insanely fast cloverleaf around barrels in a rodeo arena.

She was also the biggest pain his ass had ever had.

Despite that, and the way his jaw usually tightened and his brows lowered every time he saw her, this time there was also a bit of a smile. Or, if he was honest, probably more of a smirk. Because she was riding Ghost, her gray grullo mare with the black dun stripe along her back and the flashy black bands of coloration on the legs. The horse who was a controlled, top-of-the-game athlete in the arena, and an utterly crazy demon outside it. Her best barrel horse. The horse who had debuted three seasons ago with a bang, taking her to a top ranking on day one and keeping her there ever since.

The horse who wouldn’t be here if not for him.

He admitted that always gave him a snarky sort of satisfaction. That she owed him, and his favorite toys that she hated with a passion, for this. Because if one of his drones hadn’t overflown that pregnant mare of hers who’d been downed in a remote part of the Roth ranch during a storm, and if he hadn’t seen the footage soon after and notified her parents—thankful he’d reached them so he didn’t have to call her—Ghost likely wouldn’t be here.

And now, six years later, she had a champion. Because of him. And nothing she said or did could change that. Not that it made her hate him any less, in fact it probably just exacerbated the feeling, but he could put an end to any tirade she launched at him simply by saying “How’s Ghost?”

Just knowing he had that weapon made him more willing to egg her on than he had been before. Like the time in middle school when he’d just walked away after she’d gotten a bunch of girls together within earshot of his group of tech-interested friends—otherwise known as the nerd herd—and got them talking loudly about how pretty he was. They wanted brain power, not looks, they often said, and after Roth’s stunt it had taken a prodigious effort on his part—and inventing a virtual reality game they all declared they loved before he told them it was his—to gain acceptance.

Then she’d nicknamed him Cody the Coder, and he’d lugged that around ever since. Even his family used it when they wanted to tease him about something. He’d tried hanging “Britt the Brat” on her in turn, but somehow it had never stuck. Maybe because she wasn’t a brat to anyone but him.

Of course he’d done his share of stoking the fires. From the time he’d sent her on a wild goose chase saying he’d seen roadrunner tracks in some brush down by the creek—he’d even faked some of the bird’s distinctive X-shaped tracks, knowing she loved the things and would watch and wait for hours to see one—to when at fourteen, he’d made sure she’d overheard him saying a boy in his chemistry class liked her, knowing she already had a crush on the guy, and also knowing the guy was all about the girly-girls and had no liking for cowgirls like her.

The resulting embarrassment for her gave him an odd combination of amusement and twinges of guilt; it was different, somehow, using someone else to get to her rather than doing it himself. Yes, she’d done it to him first, but he didn’t like the feeling, and so stuck to the old tried and true ways after that. And interestingly, so did she, and he briefly—very briefly—wondered if she’d felt something similar after the nerd-herd tactic.

What it boiled down to in the end was simply that she was the girl next door and the girl he’d disliked on first sight, all rolled up into one. And the feeling had clearly been mutual; his first memory of her had been the scowl she always wore around him. Now that they were a decade beyond high school, nothing much had changed except they both seemed to have less time to think up things to aggravate each other.

Well, new things anyway. The old aggravations were always there.

You two are a perpetual Mexican standoff.

The sentence leapt into his mind. He’d been eight when his amused father had made that observation. He’d only been puzzled. And had to ask.

“A situation where nobody wins.”

His stubborn had risen then. “I’ll win, someday.”

His father had given him a wry shake of his head. “Ever heard of mutually assured destruction?”

He made himself focus on the screen, before his mind wandered down the useless path of wondering how life would have been different for him—for all of them—if his father had come home from that last deployment alive. Unlike his brothers, who had at least had Dad into their teens, he’d been only nine when the world had fallen in on them. He’d only had him a third of his life. His brothers—Rylan, Chance, and Keller—had all had him over half. Not that it made it any different and certainly not any better for them, it was just the way his mind worked, to automatically put things in the form he could best relate to.

Roth—and Ghost—were growing larger on the monitor. And he had a decision to make. Grab the controller and divert the drone, at least to the Rafferty side of the boundary, or stick to the planned route. That he had every right to be there—or rather, the drone did—wouldn’t matter to her, not with that temper of hers.

That thought made him remember the days right after Dad’s death, the arrival home of the flag-draped casket, and funeral. She’d actually attended, which he’d belatedly realized he should have expected, since her parents and his had long been friends. He remembered bracing himself when she’d approached him, already confident and assertive at nine. But she’d surprised him.

He wondered if she’d been forced to do this, by her parents. Decided he didn’t care. He’d countered with two words. “How long?”

She ended it with three. “’Til you start.”

And in that half-dozen words a genuine truce had commenced. One that had lasted longer than he would have ever expected.

Of course, he hadn’t had time to even think about breaking that truce for a very long time. Much of that time had been spent in trying to wrap his young mind around the idea of death really being forever. That it wasn’t all a mistake, that Dad wouldn’t be coming home, ever. Of watching his mother, his ever-strong, ever-resilient mother actually break, for the first and only time in his life.

Before he could get lost in those memories, something on the screen snapped him out of it. Not just that she was much closer, but she’d moved a certain way as Ghost loped along, just a tilt of her head. As if she’d seen or heard something. He reached for the controller in the same moment Roth also reached down for something, pulled something clear of her saddle.

Cody hit the control to veer the drone to the right.

Roth shot it out of the sky.

Cowgirl Tough is available in the following formats: 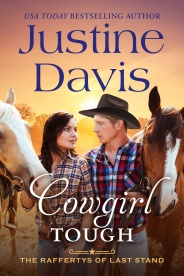 Did you know that Cowgirl Tough and many titles are available digitally from Tule's own bookstore? Check it out!