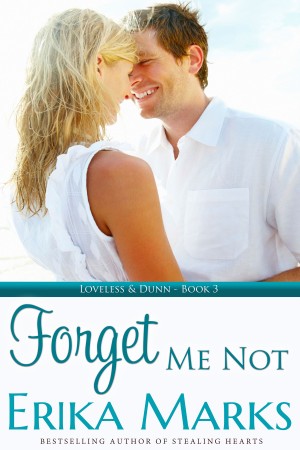 When aspiring-writer Mallory Reynolds packed up for New York City, she ditched more than her quiet hometown of Magnolia Bay—she left her high-school sweetheart, Josh Loveless, behind. But when the big city didn’t deliver big contracts on her novels, she turned to writing erotica under the pen name Farrah Ivory to spare her family any embarrassment. Soon, her scandalously-sexy series, The Lost Diaries of Scarlet, is a break-out hit. Just as Mallory begins to enjoy her sweet success, her publisher leaks her true identity and a media firestorm ensues. Exposed, she decides there’s nowhere to hide—except for home.

For Josh Loveless, getting over Mallory Reynolds hasn’t been easy, but he’s done his best to move on. For starters, he’s turned his love of the outdoors and rock-climbing into his own business. And just as things are starting to settle for him, he learns Mallory’s coming home to ride out her scandal, and suddenly his world is turned upside down again…

Can Mallory convince her friends and family that she’s still the same good-hearted girl they knew? And more importantly, can Josh trust the woman she’s become, and give her a second chance to rewrite their love story with a happy ending?

Mallory Reynolds slunk lower in the driver’s seat, wishing she’d splurged for a rental car with tinted windows. She’d always dreamed of coming back to Magnolia Bay after making a name for herself—but this wasn’t what she had in mind.

As Main Street traffic slowed to a crawl, she surveyed the busy sidewalk, dread snaking in her stomach. So far she didn’t recognize a soul—she only hoped no one recognized her.

Maybe coming back to the Bay hadn’t been such a good idea after all—not that it was her idea to begin with. When she’d called her Aunt Delta the week before, it had only been to break the news of her publisher’s blunder, and to warn her mother’s sister that soon she would be seeing Facebook postings about how her sweet little niece, Magnolia Bay’s straight-A student, had been writing the scandalously sexy Scarlet Diaries series for the last two years under a pen name. But her Aunt Delta, ever the generous soul, had insisted that Mallory come back home to the Bay until the dust settled.

Driving south, watching the stretches of evergreens gradually thin to reveal the familiar expanse of her beloved Lowcountry marsh, Mallory had felt certain that whatever scandal she’d left behind in New York City couldn’t possibly follow her here. But now that she’d arrived—and steered straight into the town center—she feared she’d been hasty. Had she really been away from the Bay for five years? Some of the storefronts looked familiar to her, but plenty didn’t. And what about the pier—was that a wine bar? And since when were there food trucks lined up along the—

At the loud voice, she swerved her gaze back to the road and slammed her foot on the brake just as the baseball-capped pedestrian smacked his palm on her hood.

“Oh my God.” Her hands shook as she struggled to lower the window and called out, “I’m sorry—I didn’t see you!”

The man came closer, close enough that she could see his eyes under the bill of his cap and recognition charged through her. She sucked in a startled breath. The faint beard and muscular arms didn’t compute, but she’d know those dark eyes anywhere.

He squinted back at her. “Mallory?”

She tugged off her sunglasses. “I—I didn’t recognize you with all that…” She pointed to her own jawline.

She swallowed but the lump wouldn’t budge. When had he gotten so…ripped?

A horn sounded. She spun to scan the row of cars behind her.

“I could pull over,” she said.

“That’s okay, I can’t stop. I just came out to grab a bite—I have to get back to the store.”

She blinked up at him. “Store?”

The horn sounded again. Josh gestured to the beater pickup she was glaring at in her rear view mirror.

“You better get moving before Mr. Rafferty rolls over you.” He gave her hood a friendly tap, far lighter than the angry whack he’d delivered earlier. “Welcome back.”

“Thanks,” she managed to answer as he walked off, her voice sounding as dazed as her thoughts.

When she heard the horn a third time, she pressed on the gas and lurched forward, forcing her eyes on the road ahead and not on the rear view mirror where she could see Josh reaching the sidewalk and disappearing inside Rocco’s.

Her heart sank with the gas pedal.

There it was. After five years, her and Josh’s first hello.

And it was as bittersweet as their last goodbye.

Forget Me Not is currently available in digital format only: 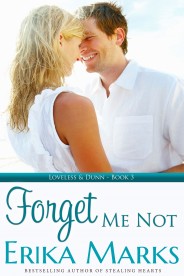 Did you know that Forget Me Not and many titles are available digitally from Tule's own bookstore? Check it out!