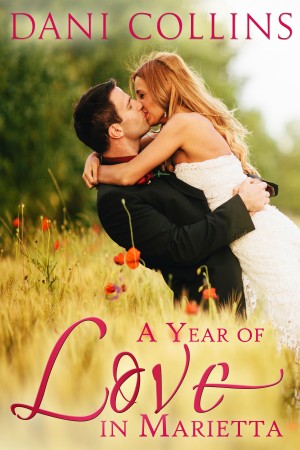 A Year of Love in Marietta

Blame the Mistletoe by Dani Collins

Liz Flowers has never enjoyed Christmas, but this one is shaping up to be the worst by far. She let her ex take her daughter to Mexico while she stays behind in a strange town, sitting her former mother-in-law’s high strung little dog. It’s an opportunity to meet new people, but this California girl doesn’t have much in common with the ranchers in small town Marietta.

Blake Canon perks up with male interest when he sees a new face at his friend’s Christmas cocktail party. His son is away and a light affair would take his mind off his financial troubles. Then he realizes he knows Liz. She was once married to the brother of his ex-wife.

Their children might be cousins, but Blake and Liz do the kissing—under the mistletoe. It’s the beginning of a new view of Christmas for Liz, but when their children arrive home unexpectedly, and family secrets are revealed, Liz isn’t sure she’ll stay in Marietta for Christmas after all.

The Bachelor’s Baby by Dani Collins

Your date with Bachelor #3 includes champagne and chocolate in the limo that collects you, a helicopter tour of Marietta and the surrounding mountains and valleys, and dinner at a five star restaurant in Great Falls.  While oil baron Linc Brady wines and dines you, a maid service will completely clean your home.

Who could resist this tempting offer, but Meg Canon plans to do just that.  She is only home to clean out her childhood bedroom for her brother’s new step-daughter and then she’s outta her childhood small town and back to her life in Chicago, but when she meets the sexy, renegade millionaire while she’s stuck in the snow, sparks fly and Meg is tempted to maybe stay a little longer.

Linc Brady is new in town and happy to help a kid in need, but this? Technically he doesn’t owe Meg a damned thing after she bids on him, after setting him up for the Marietta bachelor auction in the first place, but her high-class city polish is his fatal weakness and makes her impossible to forget. When she agrees to come home with him, he makes it clear he’s a confirmed bachelor. This is a one-night thing. One night that turns into nine months and maybe a lifetime…?

His Blushing Bride by Dani Collins

Wedding fever has hit the little town of Marietta…

Piper Tierney is busy wrapping up the school year and planning the music for Marietta’s Wedding Of The Century. She does not need one of her parents’ backpacking hippies under foot. Except the guy they let stay in their house is so much more than the California couch-surfer he resembles. Before she knows it, she’s making time to make time, even though he’s only in town for a couple of weeks.

Taking a break from working on his doctorate in political science, Sebastian Bloom wants to reassure himself his sister isn’t making another mistake with her upcoming wedding to a Marietta rancher. He’s definitely not looking for a bride for himself. Marriage and family are a trap. But Piper is cute, funny, and wants to move on from her ex.

They agree to a no strings affair, but will they wind up tying the knot? 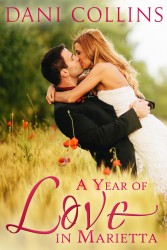 A Year of Love in Marietta is currently available in digital format only: 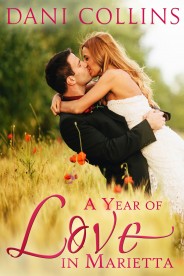