After a hitting streak propels him onto a major league roster, Nate Ramsey lands on the injured list. The one bright spot in a frustrating summer is returning home to Last Stand, Texas – until he’s tasked with confronting Keely Harper, an old flame whose business is running roughshod over his grandfather’s farm. Nate accepted it when she ended things five years ago, but he won’t overlook a slight to the rest of the Ramseys. What game is she playing?

Keely has always carried the weight of responsibility for her dysfunctional family, so she can’t regret the way she ended things with Nate. Cutting him loose to pursue his dreams was the kindest thing she could have done for a man with talent to take him far beyond Last Stand. Except now he’s back, and the fireworks between them haven’t faded a bit. If she gives into the temptation of a kiss, will she be able to let him go again once his injury heals and baseball wants him back?

Nate Ramsey hadn’t been surprised when the best two and a half months of his professional baseball career came to an end compliments of a torn tendon in his left hand.

He’d been far more surprised that a killer hitting streak had finally netted him a call-up to the majors in the first place. After bouncing between Double and Triple A ever since being drafted, he’d steeled himself for never making it to the show. But starting in May, his bat suddenly couldn’t miss. He saw the ball coming over the plate night after night, occasionally hitting for power, but mostly ringing up consistent RBIs.

His call from Austin to Houston had been the thrill ride that every player dreamed about. He’d started the day taking batting practice in a Triple A uniform, and ended it with a double off a notoriously tough left-handed pitcher under the big league lights in Houston.

He’d been interviewed by ESPN and the local news. He’d met a handful of his personal sports idols over the course of those two months. His father—himself a former pitcher with an illustrious career—had flown in to see Nate’s most recent home stand.

All of that had shocked the hell out of him.

But when the fall from grace came as he dove for a ball in right field—the only slot open for him even though he’d always played first base—Nate’s sole thought was that the end of the dream made perfect sense. He’d never been the Ramsey most likely to win a pennant or rack up big stats. He was the middle son. Not as strong as his older sibling, Cal, or as fast as his younger brother Wes. He was the peacemaker. The extra. The one who went along for the ride.

The one whose girl dumped him when he entered the baseball draft.

So any blaze-of-glory moment that he got was a bonus.

Now, slumped in his hospital bed in Houston following surgery on his left hand, Nate felt himself come back down to earth with a thud. He’d earned a spot on the sixty-day injured list, and he wasn’t eligible to sit on the bench or travel with the team. At least not yet. His sole mission in life now—as far as baseball was concerned—was to heal and rehab.

He should consider himself lucky, he supposed, for ever having a shot at the big time in the first place. But the crash landing after the ten-week run still sucked. And his play in the majors—while adequate—hadn’t been brilliant. As the fill-in for another player who was injured, Nate’s return was far from guaranteed.

When his cell phone chimed beside his bed, the caller ID read “Gramp.” Nate didn’t think he would have answered for anyone else. But Everett Ramsey had never given a rat’s ass about baseball, and had never pretended otherwise. Besides, his grandfather had been in an accident last spring that had forced the family to remember the cantankerous patriarch wasn’t getting any younger.

“Gramp?” Nate answered, trying not to let the worry come through in his voice. “How are you doing?”

“Better than you, I hear.” At eighty-nine years old, Gramp still sounded much the way he had all of Nate’s life. Gruff and blunt, but with moments of affection. “Your mom tells me you’re going to be laid up for a bit.”

Nate’s parents had been divorced for eight years, but his mother still looked after her father-in-law. She’d even moved back to the Ramsey family home—right next to Everett’s ranch house—after the split. She’d let Nate’s dad have the over-the-top mansion on the opposite side of town, preferring the farmhouse where she’d raised her family. So his mother must have told Everett about Nate’s injury.

“It’s not a big deal,” Nate said, downplaying the surgery and the toll of the setback when his career had finally been taking off. “I get to collect a paycheck and come home for a few weeks while I heal up.”

He hadn’t spent much time in Last Stand these past few years. Even in the off-seasons he’d either remained in Austin, where his minor league team had been based, or he spent time with his brothers in whatever cities they’d been playing for. Both he and Wes had helped out with the Atlanta Rebels development camp for kids in Cal’s former home city last year.

But Nate had let go of his apartment in Austin when he’d been called up to Houston. And frankly, he didn’t relish hanging out here, where the media could track him down for updates on his condition. He’d move back to Last Stand temporarily where he could begin rehab—and brood about what might have been—in private. At least in Last Stand, only his father would needle him about his career. And since Nate was opting to stay in the garage apartment on Rough Hollow property close to his mother and grandfather, he guessed his dad wouldn’t come around much. Clint Ramsey had never liked the ranch, and his new wife Brittney always stared at the ground suspiciously when she came around, as if something unsavory might touch her designer heels.

“That’s good.” His grandfather sounded pleased. Relieved, even. He huffed out a long sigh, as if he’d just sat down or recovered from an exercise. “Because I’ve got a job for you as soon as you get here.”

“Whatever you need, Gramp.” Nate regretted not making more time to help out with the orchards over the years. Everett had been banking on one of his grandsons taking over the business he’d built when he’d converted the ranching lands into a profitable farm and orchard. “How can I help?”

He needed something to distract him from baseball and the possibility that he’d never see significant playing time in the majors again. His hand throbbed as the pain meds wore off, but he welcomed the sting that reminded him his recovery would be on his shoulders now that the surgeon’s part was done.

“For starters, I need you to have a talk with a friend of yours.” There was a note of warning in Everett’s tone. Or maybe it was the emphasis he put on “friend.”

“What gives?” Nate pressed, glancing up at the clock on the wall and willing his doc to come in with discharge papers.

The sooner he got out of here the better.

“It’s your old girlfriend. Keely Harper.” The Ramsey patriarch said the name with a surprising amount of venom. “The word in town is that she’s growing some of her wildflowers on Rough Hollow land.”

This was the job Gramp had for him? Confront the woman who’d dumped him about a land dispute?

“Gramp.” The pain throbbing in his hand seemed to transfer some of its ache to his head. “I’m definitely not the right guy to talk to her—”

“I disagree. You know her. You dated her,” Gramp argued, his words speeding up as his volume cranked higher. “Better that you try to have a civil conversation with her than for me to hire a lawyer and take her to court—which was your father’s suggestion for how I handle it, by the way.”

Hearing how spun up Everett was about the situation made Nate’s head pound harder. He and Keely hadn’t ended things well or amiably. Far from it. And while five years had passed since the breakup, they’d never spoken since.

He’d thought he’d seen her at a ballpark in the spring when a bus full of Last Stand residents had made the trip into San Antonio to see him play a road game. But he’d been wrong—a fact that had disappointed him far more than it should have given how long ago they’d ended things.

“I’m sure it’s a simple misunderstanding.” Nate tried to keep his voice light. Easy. As the family peacemaker, he was good at defusing drama.

“In that case, it won’t take you long to fix.” The note of finality in Everett’s voice was unmistakable. “How soon are you going to be home?”

Cursing himself for picking up the phone in the first place, Nate knew he couldn’t possibly deny his grandfather the one favor he’d asked of him in the last five years.

“Tomorrow,” he admitted, having already made arrangements.

All the more reason he needed to find his doc and get his discharge in order.

He scanned the recovery room for his clothes and landed on a newspaper open to the sports page with his team’s most recent win the lead story. The club sure as hell wouldn’t need him on the roster if they kept winning without him.

“Good enough,” Everett said, his voice suddenly sounding tired. “Stop by the house and let me know what happened after you see her.”

Gramp’s weary tone reminded Nate what a close call the older man had this spring when he’d suffered an injury leaping out of the way of an out-of-control tour bus in a freak accident in downtown. Nate hadn’t been around then either.

The thought sent a fresh wave of guilt through him. So no matter how much he didn’t want to talk to Keely again, he knew he owed it to his grandfather to help any way he could.

“Of course, Gramp. I’m sure I’ll get things sorted out.”

But as he disconnected the call, remembering his last heated exchange with the woman who’d torn up his heart and danced on the remnants, he realized that might be overly optimistic thinking.

Game On is available in the following formats: 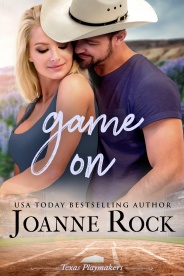 Did you know that Game On and many titles are available digitally from Tule's own bookstore? Check it out!