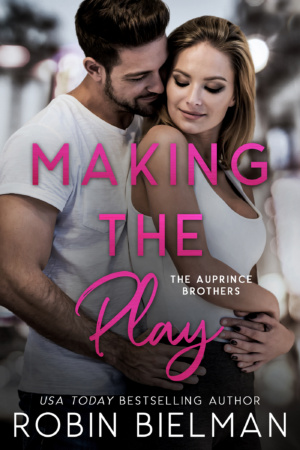 She’s sworn off love…good thing he likes a challenge.

When social media manager Chloe Conrad is hired to rehabilitate the image of Major League Baseball’s top center fielder, she’s determined to remain professional. She’s just as career-focused as he is and has resolved to never succumb to the notorious charmer no matter how handsome or quickly they click. But then Chloe lets her guard down one drunken night and confesses she’s cursed. All her boyfriends meet their true soul mate when they date her, so she’s given up dating for good.

Star baseball player Finn Auprince isn’t looking for romance, especially with his smart and sexy new media manager. She’s a distraction he can’t afford, but when Chloe confesses her secret, Finn’s competitive side emerges, and he can’t resist the challenge…or Chloe. One date is all he needs to prove that he and Chloe can have a good time without his soul mate popping out from around the next corner.

It’s game on…but can they play the game of love and both come out on top?

Until a week ago I’d say I was the luckiest guy on the planet.

I’m the hottest player in major league baseball with sick stats, millions of fans, and the respect of my fellow players.

I’m also the center fielder who collided with the back fence while trying to rob the second hottest player in the majors of a home run in game seven of the World Series. The collision knocked the ball out of my glove. And landed me on my back with a fractured clavicle.

I lost my team the championship. My error allowed the other team to score a run, costing us the game and the series.

Yeah, I know baseball is a team sport, but I’m the captain, and our first trip to the world stage in over thirty years was supposed to end differently. Now, instead of reliving all the glory, I can’t get that moment out of my head. When everything went completely silent, fifty thousand plus home fans all holding their breath as I dove for a hell of a hit, determined to rob the other team of victory. I had it, held the ball in the sweet spot of my glove…until it rolled off the leather in slo-mo, a collective groan echoing around the stadium. I’m still not sure if the grumbles were for the dropped ball or my injury, but either way, that sound of disappointment hurt a thousand times worse than the pain slicing through my collarbone.

“Then she unzipped my pants and pulled out my dick, right there in the middle of the restaurant.”

I blink back to the present at the word “dick.” When talk turns to a guy’s favorite body part, shitty memories bite the dust, at least temporarily. “She did what?”

“Nice of you to rejoin the conversation,” my older brother, Ethan, says from the other side of the couch. He stopped by to cheer me up with coffee and tales of his latest sexcapades. Beats the time he and our younger brother tried to put me up for adoption. (That’s what happens when you’re the best-looking and most athletic of the three.)

I rotate my right shoulder, trying to stretch my upper back. The sling on my left arm is a royal pain in the ass. Several more weeks of this is going to kill me.

“Were there any witnesses?” I ask to mess with him. “Or was a magnifying glass used to confirm said extraction?”

“His sense of humor returns. You must be feeling better.”

When I don’t answer right away he gives me the big brother eyebrow raise, silently telling me to fess up. There’s no one I trust more than my brothers, but that doesn’t mean it’s easy for me to spit out my every worry. Truth is I’m scared as hell. The doctor tells me most clavicle fractures heal themselves without surgery, that three weeks in a sling to immobilize my arm followed by passive range-of-motion exercise, then more aggressive strength training should be all that’s needed. This is his conservative plan. The not so easy route for some compound fractures is a trip to the OR to repair the damage. Look, I know it’s not major surgery, and I’m in the best shape of my life otherwise, but even the possibility of being cut into does things to a guy’s psyche, you know?

“Pain’s still kicking my ass,” I finally say. “Nothing I can’t handle, though.” What I really don’t like is dealing with the constant attention from my family and friends. I wouldn’t call myself a loner exactly, but I have no problem being left alone—especially with my injury. Insert laughter here, because having the last name Auprince has afforded me very little privacy since the day I was born. Add in baseball, and let’s just say I have to work hard at keeping some semblance of solitude.

I lift my Starbucks cup off the coffee table to finish the warm brew. A shot of pain where my neck meets my shoulder reminds me it has only been a few days. “Feels like a year. I hate sitting around doing nothing.”

“I agree forced time off sucks, but you’ve been going nonstop for a long time. A little rest might be good for you.”

I’ve heard about this thing called “rest” but unless it’s right after mind-blowing sex—in which case rest is necessary before overwhelmingly impressive round two—I want no part of it. I’ve got one speed: on.

Granted, usually when the season ends, I take a two-week-long break before cranking it up in the off-season and hitting the gym every day with my trainer. But those weeks are not me sitting on my ass, babying an arm.

Making the Play is available in the following formats: 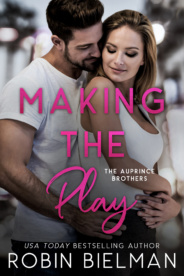 Did you know that Making the Play and many titles are available digitally from Tule's own bookstore? Check it out!