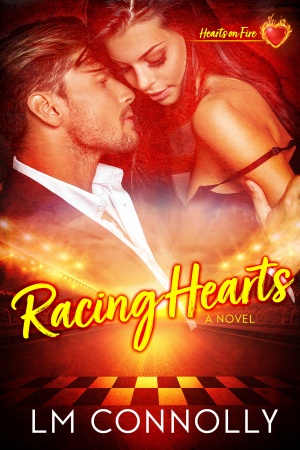 What starts as revenge soon flares to passion.

Italian race car tycoon Ronan Miller is on the cusp of achieving his elaborate revenge when he meets flame-haired back-up driver Georgia Trent. Intrigued by the beautiful and risk-loving beauty, he thinks he can use her as an instrument of his revenge, but after a spontaneous night of passion, he has other plans until fate knocks them both on a different track.

Georgia Trent has doggedly pursued a goal that has nothing to do with Mr. Tall, Dark, Seductive and Handsome. But one night she indulges her sensual, passionate and impulsive nature, never dreaming the consequences will be so permanent. Wanting to do the right thing, Georgia tracks down the elusive Ronan who’s disappeared after a family emergency.

Watching Georgia game her way into his office reminds him of all he’s been missing, but Ronan’s always been business before pleasure. But business won’t help him now. He is going to have to use all his seductive skills to woo Georgia back to his side, but has he waited too long?

Ronan Miller looked up from the papers his half brother had just handed him. He thrust the bundle back at Ethan as if the sheets were poisoned. “And you decide to tell me this now? They found our mother’s body last month, and you’ve only just gotten around to telling me?”

Bright blue eyes, the mirror of his own and their shared legacy from their remarkable mother, met his. “I only found out myself last week.”

They were of a same height, their gazes meeting exactly, both comfortably over six feet tall. They were leaning on the balcony of the best penthouse in the best hotel in Monte Stefano, waiting for the premier motor race of the season to get underway.

Ronan replaced his sunglasses and turned to the scene beyond the balcony, trying to get his mental bearings. The news Ethan had brought him changed his whole perspective, altered their lives.

In the bay, the rich blue sea supported a fleet of luxury yachts. Chrome rails glinted on the lenses of binoculars held by owners and guests, all gazes concentrated on the shore.

Ronan lifted his binoculars to his shaded eyes. The sun burned down on the ranks of cars below the hotel, the sponsor names emblazoned on the sides quivering in the rising waves of heat. A few moments ago, deafening sounds smashed through the air as hordes of fire-suited mechanics set the engines running. Once, the smells and sounds would have set his heart pounding with excitement, but too much had happened since those days.

Assistants held umbrellas over the TV interviewers and the officials who moved around. The drivers would come out soon, stand by their cars, do their personal checks and suffer the interviewers’ inane questions. He remembered them well from what seemed like another life, and another time. It was certainly another place. He’d made his name in the US. Few people had heard of him here. At least, not as Ronan Miller. If he’d used the surname he was born with—Bianchi—they’d be agog. Once, Bianchi Motors had sponsored a racing team. It still made cars that were driven on roads all around the world.

So did he for that matter, but under his mother’s name of Miller. One of her names, anyway. And his cars were specialist, custom-built sports vehicles. He’d abandoned one fortune and made another. Now he was back, to see his father rot in hell for what he’d done to his mother and baby sister.

But the man standing next to him, his half-brother Ethan Black, had just rocked his world.

“Why are you telling me now, just when I’m poised to get the revenge I’ve been working for?”

“Because you might want to change your mind, or amend your plans,” Ethan said. “After you knew. I couldn’t get to you yesterday, as I’d planned, because of the airline strike. But there’s still time.”

The sound from below faded as Ronan took in what his brother was telling him. “You mean I’ve been using a fake name all these years?” He shook his head. He’d taken his mother’s name after he’d walked out of his father’s palazzo the day he’d turned eighteen. “Our mother’s name wasn’t Evangeline Miller?”

The binoculars hung around his neck, forgotten, as Ethan turned to face his brother. “Just little Tracy Davis from the wrong side of Houston, Texas.”

Ronan gave a humorless laugh. “Changing our names seems to be a family tradition.”

But, really, it didn’t matter what name he used. After he’d walked out on his father and left his heritage behind, he’d have been as happy to pick a name out of the phone book, just as long as it wasn’t Bianchi. He’d spent the intervening years remaking himself anew. In a way he found ironic satisfaction in creating something from scratch. His business, his name… it belonged to him alone. Did it really matter what that name was?

Except the mother he’d known, the world-famous model, Evangeline Miller had been manufactured. She’d started as Tracy Davis, a girl from a trailer park in Texas. He checked the birth date on the certificate Ethan had handed him. And two years younger than he’d thought. Evangeline Miller had run away to New York, made herself famous and married hotelier Dustin Black. After that, when her son was a year old, she’d dumped Ethan with his father, and run off with Mario Bianchi, an Italian billionaire. Ronan’s father.

And apparently there was even more to her story.

Racing Hearts is available in the following formats: 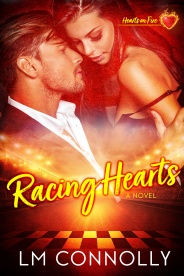 Did you know that Racing Hearts and many titles are available digitally from Tule's own bookstore? Check it out!