Homecoming for the Cowboy

Will he break a promise or break her heart?

Colt Vance owes everything he is to the Martin family, which is why he’s stayed far, far away for years. But now that Fritz Martin has asked him a favor, he’s back in Last Stand facing the one temptation he can’t ever give into: his mentor’s middle daughter.

Sadie Martin doesn’t like Colt Vance, or so she’s told herself for years. He’s far too charming and has her father wrapped around his finger. But Sadie doesn’t have a choice except to work with Colt to save her beloved goat farm.

Working together tests Colt’s resolve when it comes to his attraction to Sadie, and Sadie comes to realize she doesn’t just enjoy Colt’s company, she craves it. But Colt can’t break the promise he made to Fritz years ago. Can one tenacious farm girl convince this stubborn cowboy love is always the answer to any problem?

“I know we need help, but we do not need his help. If you’d just give me the books, actually let me in, I could handle this without him.”

Fritz Martin sat in his oversized chair behind his giant desk that took up most of his office. Behind him, a long rectangle window looked out over the rolling green of their land. Martin land for generations. He made an imposing figure: big man, big furniture, gorgeous backdrop.

Not just an imposing man, but an impressive one. A man Sadie loved with her whole heart.

Still, she wasn’t at all surprised he was currently determined to ruin her life.

Sadie wouldn’t get her way on this, but knowing she would lose didn’t mean she’d ever known when to give up. Not when it came to what she loved.

Fritz was a big bull of a man, and even when she wanted to pound some sense into him with her fists, she loved her father with a fierceness that hit her at the oddest times. Like right now, when he was suggesting they partner with one of the most annoying men in her life.

Still watching him sit in that big chair, mouth twitching upward, her heart swelled with love, admiration, and gratitude. After his health scare last year, and losing her mother at such a young age, she knew how precarious life could be.

“What do you have against Colt Vance?” Dad asked, mouth serious, eyes twinkling.

Everything, Sadie thought with a scowl. But she focused on business. Because business was what this was all about. “I don’t like the way he talks down to me. I don’t like his arrogant rudeness. I think the way he got his money is sleazy, and what he’s doing with it is even sleazier.” It was all exaggerated, but exaggerating suited her mood.

“You don’t like that he’s been right when you’ve been wrong a time or two.”

If it had been anyone else, she would have argued, defended herself against such an unfair assessment. She would have never, ever admitted Colt Vance had been right about anything to anyone else. Ever. But since it was Dad, she wrinkled her nose. “That too.”

He laughed his big booming laugh. A staple of her childhood. Fritz’s laugh and Fritz’s love and his complete and utter inability to see his daughters as independent, autonomous people.

“Go let him in, Sadie. We’ll discuss all this later.”

It was a dismissal, and Sadie tried not to let it burn. She turned on a heel and strode out of her father’s office.

Dad might not trust her with the full financial picture of Martin Family Farm, but regardless, Sadie refused to let the farm fall apart under her watch. She stalked out to the living room where Dad said Colt would be waiting.

Colt sat—no that wasn’t an accurate word—he sprawled on a leather couch, cowboy hat pulled low. He wore battered jeans, even more battered boots, and a crisp-looking blazer over a T-shirt. He should look ridiculous. He was ridiculous.

If she told herself all that, worked on her outrage and ire, she didn’t have to pay attention to all the ways Colt made her feel off-kilter and strange. Uncomfortable. Sadie hated to be uncomfortable.

So, she detested him. Plain and simple.

“Dad will see you now,” she said, trying to keep the venom out of her voice and failing miserably.

Colt took his time looking up, nudging the brim of his hat back. Then he flashed that lethal grin and slowly stood, unfolding his long, lean body as graceful as a dancer might. He was gorgeous, and knew it. Chiseled jaw, sensuous mouth. His eyes were the color of bluebonnets and his cowboy hat covered what she knew to be hair that glinted gold.

“How’s it going, squirt?” he greeted.

Oh, she downright hated Colt Vance. “I see you haven’t changed, Colt,” she managed without sounding like the words escaped from gritted teeth.

“Now, why would I go and do a silly thing like that? Way I hear tell, I’m perfect just the way I am.”

“Hearing voices again?” She smiled sweetly up at him. Because he was six foot three to her five five. Her smile died into a frown. “Do you have to be so tall?”

“Do you have to be so short?” He gave a strand of her hair a casual tug before she slapped his hand away, irritated by the way physical contact with Colt always caused an off-putting buzzing sensation along her skin.

He moved past her and toward Dad’s office. He knew the house well enough, having spent more time than Sadie cared to remember working for Dad and Martin Family Farm before he’d jaunted off to build his business of land and house flipping here, there and everywhere. And still Dad considered him family.

It shouldn’t eat at her the way it did, considering Mom had brought the bad boys of Last Stand under Fritz’s roof all those years ago, and only a promise to a dying woman had kept Fritz invested in them.

But somewhere along the line, maybe about the time all his daughters had hit puberty, Dad had decided Colt Vance, Ethan Thompson and Bracken Jones were the sons he’d never had.

Dad boomed a welcome at Colt that echoed into the hall, and Sadie heaved out a sigh before following Colt into Dad’s office.

Colt moved around Dad’s imposing desk and they exchanged one of those man handshakes that turned into a sideways back pat they’d never admit was actually a hug.

And that was the real reason she didn’t like Colt, didn’t want Colt as part of Martin Family Farm.

Pure jealousy. She’d tried to be the son her father had never had, but she didn’t have a penis. So it didn’t matter what she did. Colt—no relation, no blood—got the man-to-man stuff. And she was relegated to daughter, who couldn’t even be trusted with the financials of a goat-raising and milking operation she practically ran single-handedly these days.

Much as she loved her father, he treated Colt and his other strays differently than his three God-given daughters, and that would never stop bothering her. He’d had his daughters, loved them and overprotected them and been a good father in a lot of ways, but it wasn’t the same as being treated like an equal.

Now Colt was sneaking his way in here and he was going to usurp her. Take everything she’d worked so hard for, and she’d be left with nothing.

She’d do everything in her power not to let that happen.

Homecoming for the Cowboy is available in the following formats: 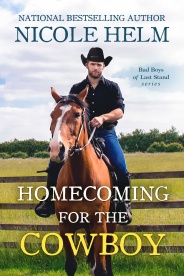 Did you know that Homecoming for the Cowboy and many titles are available digitally from Tule's own bookstore? Check it out!