A Texas Christmas Past

Death denied Felicity a future with the man she loved, but her spirit lingers in the the Harwood House Hotel hoping to heal broken hearts and help them to find love again….

Widowed World War I nurse Audra Donaldson returns from France planning to devote her life to helping those suffering the lingering effects of war—effects she knows all too well, as she suffers from them herself. When, staying at the Harwood House Inn on a Christmas visit to her brother, she hears a man in the throes of a violent nightmare, she goes to him without question—and is stunned by a physical attraction as strong as her desire to help.

About to embrace the beautiful angel come to save him from the horrors of the battlefield, former soldier Drew Harwood recoils when he realizes Audra is real—and has seen his “weakness.” Brusquely rejecting her offer of help, he intends to avoid her. But more than just her beauty continues to draw him back. Though this compassionate, kind, and giving soul has seen more of war than he has, somehow, talking with her brings him peace–and seems to comfort her, too. If he can just resist acting on the desire she’s ignited in him since his first glimpse of her…

But someone else was watching, too. After tragedy denied Felicity a future with Drew, her dying wish was that he live his life and be happy for them both. To her sorrow, a year later, her former fiancé is still struggling. Deciding Audra is the perfect lady to heal the wounds of her beloved, this determined ghost resolves to bring Drew and Audra together. Who can resist a love that lasts beyond time?

After tethering his horse, Drew Harwood limped up the stairs of the Victorian mansion, inhaling the herbal scent of the cedar garlands hung along the handrail. Reaching the porch, he paused to catch his breath and take it all in.

A golden glow of gaslight emanated from the bow-front windows of the west parlor to the right of the front door, revealing in the room beyond a sparkle of candlelight on the mantel, and in its customary place in the corner, the tall pine Christmas tree. A bow-bedecked wreath of the same fragrant cedar graced the door itself, and more garlands outlined the railing that circled the wide front porch.

Home. His heart contracted with joy and gratitude. How many times, tossing with fever in the narrow cot of that field hospital in France, had he feared he’d never make it back?

Not just home, but to Felicity. Mother had written she’d invited his fiancée to stay with the family for his homecoming and the Christmas ball the Harwoods gave every year.

Though he’d felt compelled to be alone for his first glimpse of Whiskey River since leaving for the war that had changed his life, suddenly he couldn’t wait to see them.

Before he could move, the front door swung open, bringing a rush of warmth and the spicy scent of gingerbread. “Drew!” his mother cried, running to embrace him. “What are you doing out here, alone in the dark? Why didn’t you send word from the train station? We would have come to fetch you!”

“Sorry, Mama!” he said, hugging her back. “After a long year in France, it’s so wonderful to be back in Texas, and yet so…odd. I wanted to ride out by myself from the station, to let the reality of it sink in.”

“It’s real, and you’re real, and bless the Lord, home with us at last. Come in out of the cold!” she said, linking her arm with his to lead him through the front door. “We’ve been making gingerbread men for the ball. Ah, here’s Felicity. Look what the wind blew in, my dear!”

Drew’s breath caught as he gazed over his mother’s shoulder to the petite blond lady walking toward him, joy on her flushed face. He felt awed and lightheaded, as if he’d drunk too much wine—just as he had the very first time he’d seen her, at that fancy dress ball in Austin. As his mother stepped away, he held out his arms, and she ran into them.

“Drew, oh Drew, it really is you!” she cried, tears in her eyes as she hugged him. “Oh, my darling, how I’ve hoped and prayed for this moment!”

As his mother tactfully withdrew, Drew wrapped his arms around Felicity’s slender form, cradling her close to his chest, drinking in the warmth of her and the lavender perfume that emanated from her hair and skin—the same perfume that had scented the letters he’d read over and over. Holding her was as soothing and healing as her signature scent, and ah, how he’d missed it!

And then he just had to have a kiss. Drawing her into the deserted east parlor, he tipped her head up and brushed his lips across hers, gently at first, then with increasing passion as the desire consumed him to make her his at last.

Finally, he made himself break the kiss. “Tell me the wedding is tonight,” he muttered as he leaned his chin on the top of her head, his heartbeat still stampeding.

Laughing, she reached up to stroke his cheek. “I wish! But we have to wait until after the ball. You know your mama would be disappointed if we married tonight and left on our honeymoon before the Harwood Christmas ball. Since your daddy’s passing, it’s given her something to focus on.”

“I know. But with the war, and then being wounded, we’ve waited so long already.” He captured her fingers and kissed them. “You’ve been baking cookies, Mama said. Your hands are still warm from the oven! And your face.”

“Yes, I do feel warm. All those gingerbread men baking! Much as I’d like to keep you to myself and kiss you until the preacher calls us to take our vows, I suppose I must share you with the family. They’re all anxious to see you, too.”

“Very well,” he agreed, offering her his arm and escorting her down the hall toward the family’s private parlor. “Who else is staying?”

“Your sister and her boys, your aunts and uncles from Austin and San Marcos, your mama’s cousins from Galveston. So we’ve a full house until after the ball. I’ll turn you over to them and go up to dress for dinner.”

“Wear something pretty for me,” he said, bending down to give her another lingering kiss. “Or nothing at all,” he added in a murmur.

“Devil!” she chided, her saucy grin at odds with her reproof. “I may lie down for a bit, too. The heat in the kitchen gave me a headache.”

“Don’t be away too long. Or I’ll have to invade the sanctity of your bedchamber and carry you off.”

She sighed. “I can’t wait until it’s our bedchamber.”

As it turned out, he did invade her bedchamber—called there by his mother and sister Eulalie, after Felicity failed to appear back downstairs. “Worn yourself out baking cookies, have you?” he teased, taking a chair by the bed.

“Sorry,” she muttered, tossing her head on the pillow. “It’s just…my head aches so.” She took a wheezing breath. “And my chest…hurts.”

He captured her restless hand, stilling it—and alarm jolted through him at its scalding touch. “She’s burning up,” he murmured to his mother. “You’ve given her willow bark tea, haven’t you?”

“Yes, and a witch hazel cloth to her chest,” she replied. “It doesn’t seem to be helping.”

He caught the glance that passed between his mother and sister. “What is it?” he asked sharply. “What’s wrong?”

His sister looked down at him, tears in her eyes. “We…we think it might be the Spanish flu.”

Cold dread hollowed the pit of his stomach. “No, it can’t be! It’s just some…some stray fever.” No way could he have survived his injuries, struggled to learn how to walk again, and finally returned home—only to have the woman he loved more than life come down with the disease that had killed millions of people all over the world since its outbreak earlier that year.

“We hope that’s all it is,” his mother soothed. “Just to be safe, though, we’re quarantining her here. Eulalie’s sending her boys home, and we’re asking the neighbors to take in the other relatives. It would be wiser if you went away, too, but we figured you were unlikely to agree to that.”

“Of course not!” he spat back, anger and disbelief fighting with fear. “I’m staying right here until the fever breaks and she starts feeling better.”

“We sent for Dr. Lanagan. Though if it’s the flu, there won’t be much he can do,” his sister added softly.

“I’d better have Hilda help ready our guests to go elsewhere,” his mother said. “Try to get Felicity to drink as much as you can. I’ll be back soon.” Nodding to Drew, his mother walked quietly out, his sister trailing behind her.

A sense of unreality seized Drew as he sat there, gazing at a lovely face that had now flushed even redder and eyes that stared back without seeming to recognize him.

“We’ve gone through so much, waiting to be together,” he whispered, squeezing Felicity’s hot hand. “We’ll get through this, too, my love. You’ll see.”

But as the night wore on, Felicity’s fever mounted ever higher and her breathing became more ragged and uneven, ending in shuddering coughs. Drew remained beside her, feeding her sips of water when he could rouse her to taste them, talking to her when he could not.

Though the long night, he told her about the ranch and his plans to bring his army buddy back to help run it, now that his injured leg was too weak for him to handle the heavy work. How they would breed their herd with stock from “Baron” Kelly’s ranch and create an even better line of cattle. How they would fill the rooms of his mother’s house with their children, whose shouts and laughter would scour away the sadness of a war that had ruined his leg and taken the life of his younger brother and caused his father to die of grief and overwork.

By the wee hours, he’d given up trying to get Felicity to drink, but he refused to release his hold on her hand or allow anyone to take his place, even though she continued to seem unaware of his presence.

Just before dawn, a pull at his fingers jolted him from an uneasy doze. Felicity was staring up at him, her fever-glazed eyes open wide, her skin now blue-tinged in the lamplight.

“Nothing to be sorry for,” he said, kissing her hand. “You’re going to get over this, just like I recovered from my injuries.”

“I love you…so much,” she said, obviously struggling to utter the words. “If you…love me, live your life…and be happy. For…us.”

“I will be happy,” he whispered back fiercely, tears obscuring his sight. “We’ll be happy together. My only darling!”

But he knew she hadn’t heard him. On a long shuddering sigh, the breath left her and she slipped away.

A Texas Christmas Past is available in the following formats: 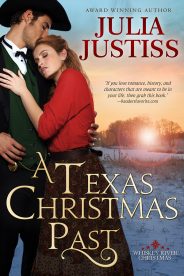 Did you know that A Texas Christmas Past and many titles are available digitally from Tule's own bookstore? Check it out!