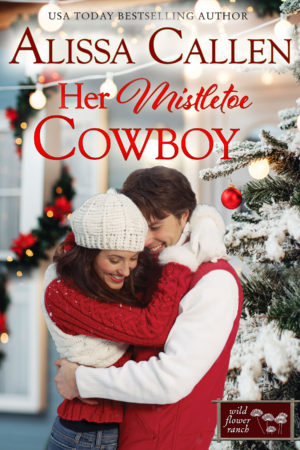 Corporate analyst, Ivy Bishop, intends spending Christmas holed up in an isolated Montana ranch house with only an abandoned puppy for company. When the festive season ends her broken heart might just have had just enough time to heal.

Ex-rodeo rider, Rhett Dixon, has put his playing days behind him. He has something to prove. Despite being the first son in three generations of ranchers, he is determined to succeed in ranching on his own merits.

But when Rhett’s new neighbor proves to be far-too-pretty and far-too-compassionate, his single-minded focus deserts him. And the more time Ivy spends with the workaholic, blue-eyed cowboy next door the more she realizes her heart isn’t actually broken – yet.

She was only staying for one night.

It didn’t matter how much Rhett repeated the thought on the walk from the main ranch house to his log cabin, the tension constricting his ribs refused to ease. His self-preservation had already earmarked Ivy’s pretty face and strong spirit as a distraction. A distraction he simply couldn’t have. He had to remain focused on the end game. He had a new ranch to establish and a deathbed promise to honor.

It also didn’t seem to matter how casual he kept their banter as they collected Ivy’s bag from her car, the closer they walked to his house the more the spark in her eyes dimmed. She was running on empty. He needed to get her and Milly inside, get them warm and fed and ignore the voice that said to load them into his pickup and head to his family ranch where Peta and Kendall would take over.

After all, it was only one night.

But as he opened the side door to his cabin he couldn’t let go of the feeling he was opening the door into his life.

“Thanks,” Ivy said, her tone quiet as she entered the mudroom. He followed, set her bag on the floorboards and removed his boots. She bent to do the same.

“It’s okay. Leave yours on.” He hung his hat and coat on the hook to his left. “You’ll stay warmer if you take your boots and coat off in front of the fire.”

“Are you sure? I don’t want to tramp snow inside.”

He looked at her city footwear and grinned. “You have as much snow on your boots as Milly would have on her paws.”

Canine nails clipped across the floorboards as Rusty, his faithful aged Australian Shepherd, left his dog bed in the far kitchen corner to join them. Milly popped her head out of Ivy’s coat and whined. Ivy placed the pup on the floor. The little Jack Russell launched herself at Rusty and engaged him in a doggy wrestle.

“I’d run now, Rusty, while you can,” Ivy said, laughing. “Once Milly starts playing she doesn’t have an ‘off’ button,”

Rhett concentrated on the two tussling dogs and not on the smiling woman an arm’s distance away. Ivy’s husky, musical laughter reached a place inside him he didn’t even know was lonely. A place he didn’t want to awaken. The path he’d plotted to achieve his goals was a single-track only.

He swung away to collect a small stool and moved it close to a sofa chair near the fire. “Here, take a seat and rest your feet on this to warm them while I rustle up some coffees.”

“I really don’t want to be a bother.” She pushed back the fur-trimmed hood. “I’d rather help than sit.”

“It’s fine, I’ll get the coffees,” he said, already at the kitchen door and in sudden need of air.

Wearing her hood, Ivy had been beautiful. Without it, she was pure distraction. Her fawn-brown hair was thick and glossy and longer than he thought. When not wearing her hooded-jacket it would reach halfway down her back.

He grabbed for the coffeepot. He wasn’t even going to think about her mouth. Even devoid of color, her full lips made a man wonder if they tasted as sweet as they looked.

He reentered the living room, coffees in hand. He had to focus on being neighborly and not on the fact that over near the fire Ivy shrugged off her jacket. Coffee slopped from a mug and burned his left hand as he side-stepped the playing dogs. He’d been too distracted by the perfection that lay beneath Ivy’s coat to notice where he walked.

Taking her and Milly to Bluebell Falls Ranch to be fussed over by his sisters had to be the best option. The alternative was to spend the next twelve hours in close proximity with a woman dressed in fitted jeans, knee-high black boots and some sort of tiny white fluffy cardigan that clung to her curves like a second skin. Small pearl buttons drew his gaze exactly where it shouldn’t go, the top button having worked itself free and giving him a glimpse of the smooth skin at her throat. As she bent to drape the jacket over the arm of the chair, her heavy hair slid over her shoulder. Again he caught the scent of vanilla mixed with something sweet. All Ivy needed was a pair of wings and she’d rival any beautiful Christmas tree angel.

Teeth clenched, he set the steaming coffees on a nearby table. He hadn’t even been around his unexpected houseguest for an hour and he’d become as sidetracked as a hormonal teenage boy.

Ivy sank into the huge chair, its size making her look almost … fragile. She closed her eyes and turned her face toward the fire’s heat. The bruises he’d noticed earlier beneath her eyes were now dark crescents. Again he had the impression the cold wasn’t the only reason for the weariness that seemed to weigh her down. Her saying she’d had a bad six months must have been an understatement.

“Here,” he said softly, as he passed her a coffee.

He wouldn’t be taking her anywhere. She was too exhausted. He might be many things, but he wasn’t a coward. He’d suck up his misgivings about having her stay and look out for her as any good neighbor would. He glanced at her chin that still retained its stubborn tilt even when she relaxed. Well, that was if she’d let him.

Her lashes swept open. The green flecks in her hazel eyes the only color in her wan face.

The corners of her mouth curled. “Perfect timing. Without caffeine I don’t think I could get out of this chair.”

She took a sip of coffee and placed the mug on the small table he positioned beside her. She then leaned forward to remove her boots.

Rhett moved away to scoop up Milly as she chewed Rusty’s tail. He didn’t need to see Ivy’s small and dainty feet. As it was, his dreams would be filled by angels with long, silken hair, curves in all the right places and a waist he could span with his hands.

He carried Milly into the kitchen and busied himself giving her and Rusty an early dinner and on heating the ham and split pea soup he had in the freezer.

When he returned to the living room carrying a laden tray, Ivy had settled on the stool she’d dragged closer to the fire.

“Whatever is in those mugs smells good,” she said, with a grin.

“Let’s hope it tastes good.” He sat the tray beside Ivy’s half-drunk coffee on the small table. In his peripheral vision he caught the flicker of firelight over her pink, varnished toenails. He passed her a mug of thick soup. “I’m the first to admit I don’t have time to be a gourmet chef.”

Her eyes smiled her thanks.

He collected his own soup mug and sat a safe distance away on the sofa. From in the kitchen doggy growls sounded as Rusty and Milly resumed their wrestling.

He took a swallow of too-hot soup and sought for something to say. His sudden awkwardness highlighted how long it’d been since he’d been on a date or talked to a woman he hadn’t grown up with. On the rodeo circuit, women hadn’t exactly been interested in his conversational skills.

“So … where are you from?” It was the best line he could think of.

But it was enough. The faint crease between her brows cleared.

“Atlanta. I’m a corporate analyst.” She hesitated. “Well, I was and will be again when I establish my own consultancy business.”

“To be honest, I haven’t decided, but I doubt it. I’m not sure there are many corporations needing financial advice in Marietta.”

He grinned. “We do have a rodeo committee who needs help balancing their budget.”

She matched his grin. “There you go. There’ll be plenty of work for me.”

All the reasons as to why he needed to go outside and fix the tin flapping on the barn emptied from his head. The hot soup had added color and shine to her curved lips and the fire’s heat had flushed her cheeks.

Her smile slipped. “After Christmas I’ll think about the future. Right now I just want my power on and time to … regroup.”

He nodded. He might know a little more about her, but it was what she didn’t say that spoke volumes. Her life was in turmoil and she’d come to her mountain holiday home a month before Christmas to lick her wounds. She’d removed her gloves, and even though her ring finger was bare, his gut told him the reason shadows lurked in her eyes had to do with a man.

Her Mistletoe Cowboy is available in the following formats: 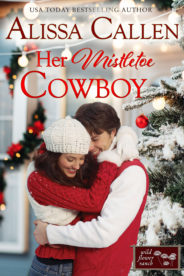 Did you know that Her Mistletoe Cowboy and many titles are available digitally from Tule's own bookstore? Check it out!