Australian cowgirl Bridie Willis travels to Montana to escape the pain of losing her father. Headstrong and determined, she plans to spend the summer alone photographing wild animals. Instead she finds herself saddled with a stubborn cowboy as a back-country guide.

Ethan Morgan has been shaped by a childhood spent on the run. Cautious, steady and conservative, he is tasked with ensuring the beautiful, risk taking cowgirl doesn’t ditch him or come to any harm.

But the biggest challenge Ethan must face is to accept how Bridie makes him feel. And the biggest risk Bridie must take is to trust in her heart.

His Outback Cowgirl is currently available in digital format only: 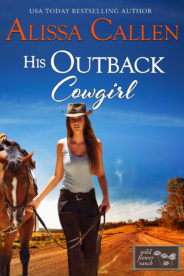 Did you know that His Outback Cowgirl and many titles are available digitally from Tule's own bookstore? Check it out!