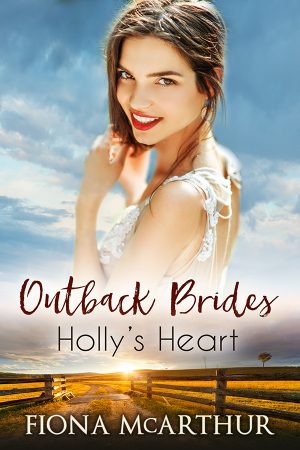 Doctor Ben Briely is keen to settle into life as a small town general practitioner and help his grandmother run Briely Park. The city life was never for him. He’s finally found the peace he’s longed for, until the arrival of that one woman he’s never been able to forget, threatens to shatter it all. No way is he revisiting that road of unrequited love…except Holly Peterson seems fragile and in need of saving, and Ben’s never stopped being Holly’s white knight.

After losing her sister and her faith in the world of medicine, Holly Peterson moves home to Wirralong along with her two nephews. Determined to rebuild her life and create a loving home and sense of belonging, she opens the Outback Brides Coffee Shop as her new vocation. When she learns that Ben Briely, the man she said no to years ago is home to stay, Holly fears she’ll lose her heart and her focus on her nephews if she lets him in.

Will Ben be able to break through Holly’s fears and barriers or will history repeat itself and destroy him once again?

Dr Ben Brierly twirled his wide-brimmed Akubra on one finger as he surveyed the empty consulting rooms. Wirralong Family Doctors Surgery. His!

It felt fantastic to be home. He’d never thought the town would grow enough to sustain a general practice, but here he stood about to open his own business.

Today, his temporary and outrageously expensive secretary-cum-office-manager Mrs Burrows, hired from Melbourne with vast experience of opening general practice establishments, had completed his new world. During the organisation she’d been worth her weight in pharmacological shares, even loading the computers with the software for patient files. She’d assembled and installed all the furnishings and additional software a small practice needed, outfitting the reception area with waiting room chairs and a water cooler. She’d even hung his medical degree and his nameplate with surgical precision.

Her registered nurse helpers had set up his consulting room and the procedure room, plus the smaller nurse’s consult room, created and signed off the emergency drug kit with the pharmacist in the main street, and they’d put the rest of his equipment and paraphernalia in the silent, non-existent, partner’s room.

Thus, his appointment book would be accessible for the next week before he officially opened his doors for four days a week … keeping Wednesdays free to sort his grandmother’s rundown property with the new farm manager.

He shouldn’t have stayed away so long.

Mrs Burrows’s final task would be to interview applicants for her replacement, and the practice nurse, then the whole relocation exercise would have happened without any physical effort on his part. Mostly because he currently had more money than time.

Which was lucky. He couldn’t believe the mess Brierly Park had been in. Or the guilt that rode him like a snowy mountain brumby for leaving Gran to deal with an incompetent manager on her own after Gramps had died. But he hadn’t known, and—seriously? There were reasons he hadn’t wanted to come back here, and his grandmother was … a little difficult if he suggested she needed help. Which was why he chose to reside in town and not butt heads over the small stuff.

She’d wanted him to commute from the Park, but having a flat here in Wirralong made much more sense. Thankfully the premises came with upstairs quarters. Mrs Burrows had found Gran a saint for a housekeeper and that would help everyone.

Remembering Brierly Park and the sunset-dusted hills little more than an hour ago, when he’d turned his horse for home, made him breathe deep and let his shoulders drop.

The air had been filled with the scent of gums, the spaces so open, and the excitement of the muster had lifted his spirits higher than they’d been for months. Even bending his back with the fencing contractors on the new cattle yards earlier today had felt good.

He glanced at the hat in his hand and twirled it again. The cowboy doctor, eh? He blew a breath out between pursed lips and jammed the hat on his head. Home.

Ben turned out the office light and the door he remembered as clunky, swung silently to lock with a gentle click. Mrs Burrows had hired a handyman for the week and it was ‘the little things’ she professed to be proud of. Darn right she should be proud.

Ben slapped the rail in approval and vaulted up the stairs three at a time until he reached the landing and unlocked the door to the spacious two-bedroom apartment and tossed his hat, which obligingly landed on the hall stand hook, and surveyed his private domain with pleasure.

Freshly painted, the room’s age and character melded and his stuff didn’t look out of place, considering he was above street level of a country town, and it felt … homely. Which he wasn’t quite sure his Melbourne flat had ever been.

When he’d dropped in here on Thursday the entry had been filled with boxes. Now, the dark leather furniture from his inner-city pad lay tastefully arranged, his paintings positioned, and … he strode across to the bedroom and slid open the wardrobe door. Yep, his clothes were hung, and his drawers filled. The woman was a marvel.

After a quick shower, he stepped out onto his tiny verandah, the one perched over his office entry below, and gazed down the main street of a town he’d worked his way back to since he’d left. Since someone else’s dream had somehow become his dream and she hadn’t returned to fulfil it. Wirralong.

Shame it had taken a personal tragedy to make him see the time had come to return home.

He shook his head at the loss of Tobias. One of his group from med school, Tobias had been a senior registrar with a brilliant mind and a determination to be the perfect doctor. That was the problem with perfection. A fatal medication error during a frantic resuscitation had devastated Tobias into shock, even though he hadn’t drawn the drug up. When the miscalculation had been realised too late and the patient died, his friend had tried to self-medicate himself out of his spiralling depression and, to all their horror, a week later he’d overdosed.

That incident had been the final straw for Ben, spurring him to leave the fast lane of major hospitals and make his life where he really wanted it. Home to be the support when needed for his independent-but-ageing grandmother and home to be the rural GP in a community he planned to be an intricate part of.

Of course, absolutely, he’d let go of any disappointments about Wirralong.

Holly’s Heart is available in the following formats: 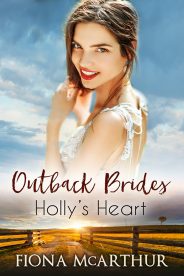 Did you know that Holly’s Heart and many titles are available digitally from Tule's own bookstore? Check it out!