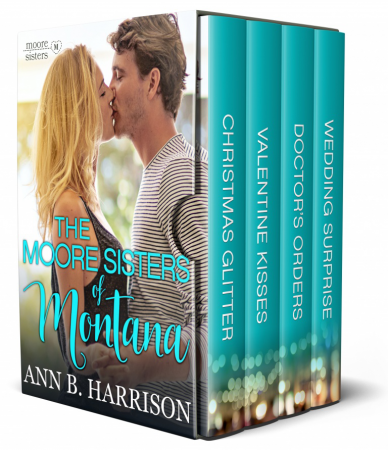 Part of the The Moore Sisters series

The Moore Sisters of Montana

Christmas Glitter by Ann B. Harrison

After a rough year involving a serious car accident, painful recovery and broken engagement, Dakota Moore moves to Cherry Lake to rebuild her life. To embrace her new community, she volunteers to coordinate the annual Christmas tree gala.

Adam Clements has come home to help his mother run the family business while his father recovers from a heart attack. For the last decade, he’s been a high-flying soccer player, enjoying the life that comes with his popularity. But something is missing and he can’t put his finger on it… until he returns to Cherry Lake and remembers the feeling of home.

Adam tries to keep his distance because he knows he’ll be leaving, but he can’t deny his attraction to Dakota. With the countdown to Christmas on, can Dakota convince Adam that his home is right there in Cherry Lake, with her?

Valentine Kisses by Ann B. Harrison

Bella Moore thought she had everything she ever wanted. The host of a hit reality show, she’s at the top of her career. So when her show goes on hiatus for six months and she finally has downtime, she decides to return to her roots and visit her sister in Cherry Lake. What she doesn’t expect is to love the town and the temporary chef position she’s taken on at the Lake Hotel.

Jake Woods is focused on his son and his job as the local fire chief. Things are moving along nicely until the new chef at the Lake Hotel almost burns the place down. Jake knows that Bella inherited a mess from the chef before her and he’s keen to help her.

After weeks of working together in tight quarters, Jake and Bella can’t ignore the sparks between them. But Bella’s stay in Cherry Lake is only temporary and Jake still hasn’t recovered from losing his wife a few years ago. They’ll have to decide whether or not the flame between them can survive without the heat of the kitchen.

Doctor’s Orders by Ann B. Harrison

April Moore has always been an impulsive dreamer. So when she shows up in Cherry Lake, announcing that she’s there to stay and start her own business–a design studio florist shop–her sisters are pleased, but more than a little skeptical. A lot more than pride is riding on her new business adventure, and April doesn’t have time to get distracted, especially not by the handsome doctor who shares office space with her. Unfortunately, April’s never been one to keep her head down and opinions to herself, and she’s barely opened for business before she thinks her first design project should involve the quiet man next door doing his best to ignore her bubbly attempts at friendship.

For someone so young, Dr David Morrison is firmly set in his ways. He’s returned to Cherry Lake temporarily to take over his father’s family practice until he can sell it and return to Seattle to rebuild his life and career. He’s always played it safe and isn’t looking for change, fireworks, or romance. Unfortunately, the vivacious April embodies all three. Each meeting is like touching a live wire, and David finds himself entranced.

Opposites attract, but can they find a happy ever after?

Wedding Surprise by Ann B. Harrison 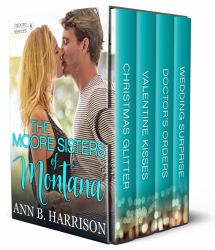 The Moore Sisters of Montana is currently available in digital format only: 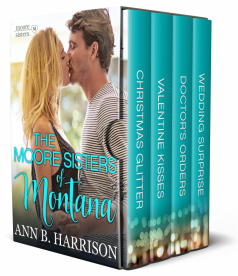