She left town to save a life. Now she’s back to avenge a death.

Years ago, Samantha Goode was driven away from love, her family, and her past. Now the Texas Ranger is back in Crystal Creek for her estranged grandmother’s funeral, even though it means coming face to face with everything, and everyone, she’d left behind. When a brutal murder shatters her world, Sam is determined to stay until she solves it. Soon she’s knee-deep in suspects, including the family of the man she once loved but was forced to betray.

Rancher Clayton Barnett will do anything to keep his autistic younger brother out of an institution, including sidelining his life to work for their powerful, manipulative father. When tragedy brings Sam back into his life, instead of rekindling their romance, Clay finds himself embroiled in a dangerous murder investigation.

Will old secrets pull Sam and Clay apart once more, or can they rise above their past? And with a ruthless killer on the loose, will Sam’s hard-earned Ranger skills be enough to ensure that Goode triumphs over evil?

Samantha Goode lay at the edge of a dry gully, watching. Waiting. The task force’s latest intel indicated the drugs would be moved soon. Tonight was the perfect night, billowing clouds hiding any hint of moonlight. She couldn’t detect anyone on the team—not her fellow Texas Rangers or the DEA agents or even the Border Patrol personnel. But they were there. Lying in wait.

She wiped sweat off her forehead with the back of her hand. The desert air cooled quickly once the sun went down, but the heavy gear and Kevlar vest didn’t help. At least she got to stay above ground, unlike Alvarez, the Border Patrol agent brought in from Nogales. His job as a tunnel rat meant he’d be following the drug scumbags into the bowels of the earth. A shiver ran down Sam’s spine at the very idea of scurrying through the tight underground drug passageways. But she’d even do that if it brought some of these bastards to justice.

Sam had a special hate in her heart for dealers and drug lords that extended far beyond her being a Texas Ranger. To her it was personal. She wore that hate like a second skin, never questioning its source or apologizing for its existence.

A voice whispered in Sam’s earpiece. “One emerging. Repeat, one emerging.” A quiet crackle of static. “I’ve got another coming out. At least two gophers in this hole.”

Her senses kicked into high gear.

She didn’t hesitate. Sam and the DEA agents charged at the command and Alvarez ran for the opening in the rocks they’d been watching for hours. He disappeared between sharp cacti and stunted yuccas. Sam held her position at their flank. Footsteps sounded near her and she swiveled her SIG P320. A black shape darker than the night flew past.

“On it.” Sam took off after the silhouette moving through the scrub brush. The runner’s footsteps pounded just ahead of her.

The shadow veered behind a rock and vanished from sight. Sam slid to a stop in the loose dirt. The cicadas had quieted their electric thrum, and the clouds thinned just enough to make out the sole of a shoe disappearing into a man-size hole in the ground.

Sam strode to the hole and shined her flashlight in, checking its depth. “We’ve got another opening. Fifty yards northwest of my original position. Following him in,” she whispered into her mic.

After holstering the tactical light, she sat with her legs dangling over the edge. The sweat accumulating on her brow now had nothing to do with the heat. Still holding her gun, she dropped, landing in a crouch on the hard-packed floor. The oppressive underground darkness encompassed her like a tomb. She grabbed her light and flipped it on and off quickly to get her bearings, lunging sideways to avoid being a clear target.

When she stood and extended both arms, her fingertips grazed solid dirt walls on either side. She took a slow, deep breath, trying to tamp down the rising panic of claustrophobia that constricted her air. Keeping tight to the left wall, she eased forward into the blackness, toward the curve she’d seen in the brief burst of light.

The splintered surface of a wooden support beam nicked her fingers. Sam put her back to the wall and inched around the bend, gun at the ready. He came at her like a cannonball, knocking her flat on her back. Hit hard, air whooshed from her lungs. With a curse, she scrambled to her feet and was after him before she’d inhaled a full breath. This asshole wasn’t escaping. No way. No how.

He darted to the entrance and clambered up the wall. Sam holstered her gun and grabbed his ankle with both hands. Kicking at her with his other foot, he connected with her shoulder. She grunted and lifted her feet off the ground, using her body weight to bring him down. Twisting, she landed on top of him as they fell to the tunnel floor. She cuffed his hands behind him, flipped on her light and searched him for weapons. Finding none, she hauled him to his feet.

He swiveled his head to look at her, eyes widening as he took in her female form. “Puta!” He spat the word.

Sam’s sharp laugh held no humor. “Sorry. That one hasn’t offended me for a long time.” She spoke into her mic. “Runner’s restrained. Need assistance getting him out.”

“Roger that. We’re coming to you. Give me a signal.”

Sam flashed her light up through the hole into the dark desert night. Dust particles from the scuffle floated in its beam. The confined area pressed in on her and sweat tickled her cheek.

She keyed the mic again. “Sometime before the sun comes up, Mark. If you’re not too busy.”

Her partner dropped through the entrance and landed next to her. He observed the bound runner Sam held at gunpoint. “I thought you might just trip him with your dainty little foot as he ran past.”

She allowed herself a wry smile. “Screw you.”

Being one of only a few female Texas Rangers, she’d quickly learned to get along better with the guys by holding her own with their bullshit. She and Mark had worked together often and he was the one person she trusted to have her back. While Sam kept her gun on the runner, Mark recuffed his hands in front to make it easier to move him above ground.

Her partner nodded toward the hole. “Ladies first.”

Sam started up, jamming the toes of her boots into rough footholds carved into the wall.

“I sincerely apologize, Sam,” Mark said as he stood beneath her. “I was wrong. Your feet aren’t dainty. Or little.”

Sam looked down, catching him staring at her size nine boots. “Make fun of them all you want. I consider them a blessing.”

Sam turned her attention back to the opening above her. “They’re good for kicking your butt.”

Mark chuckled as a DEA agent grasped her arm and pulled her up over the edge of the hole. He handed her a bottle of water. Three other cartel members were cuffed and on the ground, an armed officer standing over them. Sam paced, swigging half the water while Alvarez helped haul the cuffed man out of the hole and threw him on his back.

“You might want to recuff his hands behind him,” Sam said. She transferred the water bottle to her left hand and eased her gun out of its holster.

Alvarez placed a boot on the drug dealer’s chest as he glowered at Sam. Between his overly-muscled arms and bowed legs, it was impossible not to compare him to a Neanderthal. “I don’t need you to tell me how to do my job. You couldn’t even control him down there without your partner coming to the rescue.”

“What’s wrong, Alvarez?” Mark hoisted himself out of the tunnel. “Pissed that she caught him after he outran you?”

Alvarez sneered. “I’m just glad I don’t have to depend on a woman to—” His words ended in a yelp as the drug dealer grabbed the foot on his chest and flipped the short, stocky agent backward. The dealer lunged for the agent’s gun, struggling with his shackled hands to clear it from its holster. The barrel swung toward Alvarez’s head.

A blast thundered into the darkness. The perp spun and fell, dropping the agent’s weapon. Holstering her pistol, Sam walked over to the wounded man. She knelt on his bleeding arm while unlocking one cuff, then twisted his arms behind his back to relock them. Moans and Spanish cuss words flowed from his mouth.

“What were you saying?” Sam squinted at Alvarez while he struggled to his feet.

“Something about not wanting to depend on a woman.” Mark walked over and looked down at the perp’s shoulder wound. “Nice shot, Sam.”

“Not really. I was aiming for his balls.” She winked at her partner, then picked up the stray gun and handed it to Alvarez. “I think this is yours.”

The agent grabbed the firearm from her. “You bitch. If you hadn’t distracted me—”

Sam’s phone vibrated in her pocket, but she ignored it. She stepped up to the Border Patrol agent, her face inches from his. “You’ve been in the tunnels too long if my tits and ass distract you from your job. You’re a menace to yourself and anyone who has to work with you, Alvarez. Go home to Arizona. I doubt anyone will have your back around here again.”

The other men chuckled at the agent’s impotent swearing. While they waited for the transport vehicle, Sam stepped away to check her phone. Voice mail from her uncle. She frowned. He usually waited for her weekly call.

“Hi, Sammy. Uncle Joe here. It’s, uh, it’s your grandmother. She passed away yesterday. I know the last thing you want is to come home, but your gramps needs you. He won’t call you himself, but he’s not doing so good. And, Sammy… there’s something really strange going on at the marina. I’d like your professional opinion before I talk to the sheriff. Call me. And keep yourself safe.”

Sam slid the phone back into her pocket and resealed the Velcro tab. She paused, waiting for the news of Gram’s death to elicit some sort of emotional response. Grief. Relief. Anything. But… nothing.

She sighed. She’d rather chase a drug dealer into a tight tunnel any day of the week than go back to Crystal Creek. But Uncle Joe’s reticent tone sent a twinge of anxiety through her. He’d never asked her for a favor before. And maybe she did owe it to Gramps to return for the old woman’s funeral. Although, if blood was thicker than water, her lineage was pretty damn diluted.

She was no longer the gullible teenager she had been when she’d allowed Quin Barnett to run her off. Maybe it was finally time to go back and face her demons. Still… there were plenty of people in that town who’d be happy to never set eyes on her again.

She could think of two in particular.

Goode Over Evil is available in the following formats: 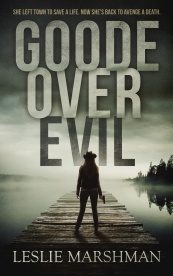 Did you know that Goode Over Evil and many titles are available digitally from Tule's own bookstore? Check it out!