She’s got it all… on paper

Business investor Carrie Morgan is guarded for a long list of good reasons. She’s battled her way to the top of her industry, dealt with enough bad sex to put her off men, and if her painful past has taught her anything, it’s that commitment always ends in heartbreak.

When Carrie’s sister asks her to sit for a portrait—as a bride—she uneasily agrees. Anything for Emmie. Even if it means intimate nightly sessions with her secret fantasy: artist Edwin Prince.

Rejected by his family and treated as temporary by past lovers, Edwin will settle for nothing less than commitment — and wants that and more from the beguiling Carrie Morgan. Startling them both, she allows him to unwind her emotional bindings one intense interaction at a time, until their chemistry builds so high, she’s blinded to the fall.

And the only way out is to break both their hearts.

Carrie Morgan was unprepared for him.

She halted on the street corner, disarmed at the sight of his back. He stood in the side street not ten strides away. On any other Monday, she found San Diego’s Gaslamp Quarter peaceful in the early morning. A pause before her working week unleashed its howl—a final respite from pressure, hustle, and men puffing their chests at her like territorial pigeons. A pause to help her cope with upcoming interviews, an industry panel, and her fast-approaching startup conference. It was going to be a hell of a fortnight.

And this man, out of context, interrupted her moment of peace. Tightened her skin. Clasped her stomach.

Stunned her with his hair in daylight.

It was the brightest copper of a red fox. Short at the sides, with top curls that always spilled over his forehead. Ridiculous, obviously, but also vibrant and buoyant and breathtaking. It shone, even in the long morning shadows where he stood, gazing up at two stories of brick wall. Two stories of Carrie’s brick wall, more specifically, attached to the building she’d acquired years back for her sister’s live-music venue.

He’d crossed his arms, head tilted to one side. Unaware of the way her pulse rushed in reaction to his presence.

Until now, this redheaded stranger had existed purely within the realm of Emmie’s venue. Carrie tried not to think of him outside of that dim, underground bubble. She had a life to live and little time for daydreaming. But when she was there—when he was there—she’d sit in the low light, concealed by the crowd, and just…watch.

He was usually dancing, committing every scrap of energy to the cause. Body lean and spare, uncatchable like the glint of light on a sword, undeniable like the snap of powerful fingers. She heeded the inherent warning.

On those nights, she’d arrive braced for the sight of him to blow lust into the flattened remains of her sexuality. Seeing him was always a full-bodied gasp—a shimmering discomfort as she adjusted to the over-inflation of feeling. In her thirty years, she’d never reacted to someone the way she did to him.

Alarm pounded in her rib cage. He was too volatile to leave that bubble—she couldn’t predict him—yet, he’d slipped out, a fox in the wild, his body stiffening, head lowering and angling sideways, as if he sensed her on the street corner behind him.

She held her breath as he turned—saw her.

“Morning,” he called, raising a hand.

She should look away. Should put cold-shouldered strides between them. She should get up to Emmie’s apartment with the bag of toasted sandwiches that were growing colder by the second.

“Thanks for agreeing to this,” he said, making his way toward her, shoulders loose, features bright.

Confused, she lifted her chin.

He halted near her, two steps away at most, his unprecedented closeness seeming to tug her stomach right out of her middle. Taller than she’d expected, she had to tip her face up to hold his stare as his scent lapped over her. Faint, torturous.

“Emmie didn’t think you would.” He glanced toward the building again, and the weight of his hair toppled to one side. He slid a hand in his pocket, and her attention caught on the elbow that jutted outward. She wanted to…hold it. Drag it closer, and him along with it.

Her grip on the breakfast bag tightened.

“More accurately,” he continued, “she said, there’s no chance in hell Carrie will ever say yes.”

He’d talked to Emmie about her? She marveled at that as he studied her again, amusement shining on his pale, well-cut face.

“But it’s going to be compelling,” he said, nodding. The longest of his curls brushed against his lashes. “I’ve got some ideas.”

She gave a curt half-nod in return. He had green eyes. Like sage leaves or frosted grass, made bolder by a similar shade in his striped shirt. He carried a brown leather satchel that matched his loosely laced brown boots, and with those black jeans, his aesthetic was a cultivated kind of casual. Reverent of his youth. Unabashedly hipster.

She died a little inside at how hot it made her.

She hadn’t spoken yet—she died a little more at that, though she’d be damned if she knew what he was talking about.

Hauling herself together, she said levelly, “Then my face is working properly.”

There was a pause.

She frowned even as his grin devastated her. “What?”

That registered with a thud. “You’ve thought about my first words to you?”

Those sparkling eyes held hers. “The woman who watches me like a wolf across the dance floor?” He paused, quirking a brow. “Yeah. I’ve thought about it.”

Exposed, the so-called wolf in her hunched. “Twice,” she deflected coolly.

“Please,” he said, a smile slanting across his mouth. Color tinged his cheeks, but her attention snagged on lips far more sensuous than they had any right to be. He was too young—mid-twenties at most—to have sensuality like that in his arsenal.

“Please, what?” she asked, irritated at her own susceptibility.

“You watch me all the time.”

“Hardly.” Her alarm grew. This was—she didn’t like this. “It’s like a muted television. My eyes are drawn to you because you’re moving, not because you’re interesting.”

He gave a single laugh. “Wow, thanks.”

His brows bunched. He waited, as if she might elaborate.

“I get the TV comparison,” he said, looking down to where he toyed with a buckle on his satchel. “Except you look like you’d rip the throat out of anyone who touched me. So it doesn’t feel quite the same.”

She scoffed, nudged off-balance by his observations. “I wouldn’t rip—”

“You wouldn’t have to,” he interrupted, gaze still downcast.

“You’re flattering yourself.” She took in his features while he wasn’t paying attention. He had freckles. Across his cheeks and forehead. She melted inside. “You’re not my type.”

His brows flicked up, though his gaze remained on his satchel. “You have a type?”

“My type is whoever I’m attracted to,” he said. “So, yes on a technicality.”

That distracted her instantly.

Did that include her?

It didn’t matter she’d never act on such attraction. That it would amount to nothing. She needed to be his type. She studied him closely, circling the uncertainty of his attraction. His cheeks were flushed, his gaze still downcast. Lips parted, breath…a little uneven.

“Why are you always looking at me like this?” His gaze lifted to the knot of her tie. Daffodil yellow, just like her heels, to contrast her tailored black suit, the soft black shirt underneath. Awareness tightened in her throat as his attention dragged up to her chin. “And why haven’t you ever spoken to me?”

She shifted. “Why would I speak to you?”

“I don’t know,” he said quietly, eyes lifting to her mouth. “Because it’s considered polite to introduce yourself before stripping someone bare?”

“You’re—” She cut off, suddenly realizing he had control of this conversation in a vice grip.

“Wrong?” His gaze slid to the strap of his bag. “Tell me what you want to do to me right now, and we’ll find out.”

“I want to make you stop talking,” she said through her teeth.

His lips twitched upward. “In which case, you’re going to have to stop looking at me.” The request was a little breathless. “It’s distracting.”

She jerked her head around, staring off down the street. Her pulse was going to pieces. She’d come here to share breakfast with her sister. Not have this man unravel her secret desire in several conversational twirls.

His Billionaire Bride is available in the following formats: 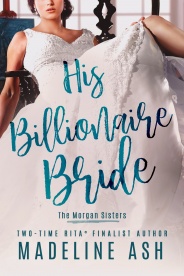 Did you know that His Billionaire Bride and many titles are available digitally from Tule's own bookstore? Check it out!