Bella Moore thought she had everything she ever wanted. The host of a hit reality show, she’s at the top of her career. So when her show goes on hiatus for six months and she finally has downtime, she decides to return to her roots and visit her sister in Cherry Lake. What she doesn’t expect is to love the town and the temporary chef position she’s taken on at the Lake Hotel.

Jake Woods is focused on his son and his job as the local fire chief. Things are moving along nicely until the new chef at the Lake Hotel almost burns the place down. Jake knows that Bella inherited a mess from the chef before her and he’s keen to help her.

After weeks of working together in tight quarters, Jake and Bella can’t ignore the sparks between them. But Bella’s stay in Cherry Lake is only temporary and Jake still hasn’t recovered from losing his wife a few years ago. They’ll have to decide whether or not the flame between them can survive without the heat of the kitchen.

Bella Moore thought she had everything she ever wanted. After winning Masterchef, she has her own reality show and a contract for two cookbooks a year, with people lining up for her to appear on their shows, attend events, and promote their goods. Burnout creeps up on her fast and even though she tries to insist she’s fine, the show’s producers give her six months’ hiatus because they want her fresh and vibrant for next season.

Not one to sit back and relax completely, she thinks visiting her sister’s in Cherry Lake and helping with the hotel is the only things that will save her from boredom. That way she gets to reconnect with her sisters and her nephew as well as keep her mind occupied. Win/win situation. A small hotel, old-fashioned kitchen and people that don’t ask for more than she is prepared to give sounds perfect before she gets there.

What she doesn’t expect is to clash with the fire chief over her new position. The last chef left the kitchen in a mess and Bella has to step up to help her sister get the premises ready for her next big event. His suggestions are great and she gladly puts them into practice, but the more he is around, the more rattled she becomes. She isn’t here for love, and to think of starting something she can’t finish makes her feel ill.

Jake Woods lost his wife a few years ago and is now happy to concentrate on his teenage son and his job as the local fire chief. He thinks a love like he shared with his wife only comes around once in a lifetime.

Until the new chef at The Lake Hotel almost burns the place down. The kitchen needs renovating but Bella says she’s wary of getting too involved because she has to return to the city when her forced break is over. The outdated equipment needs to be replaced and he is keen to help, but will that make it harder for him to let her walk away when her time is up?

With Bella’s reputation already preceding her, it’s tempting to go all out and do the best for everyone, even at the risk of falling hard for Jake. She’s feeling so much better for the break already. New ideas come to mind and instead of going off on a tangent as she used to, Bella makes notes and puts them in a file for later.

Her sister, Mari, wants to do something special for Valentine’s Day. Her Christmas Tree Auction and Gala worked so well she wants to put the hotel on the map and make a name for it. Bella has an idea. She calls her producer and makes a suggestion for a spin-off to her show which would also make her life so much simpler. They go for it. Now she is confident she can make a move on the only man that has ever made her think to put down her cooking tools when he is around.

“You’re kidding me! What the heck are we supposed to do for Sunday dinners now?” Cory huffed and dropped his shoulders, a typical fifteen-year-old’s response to bad news.

“It’s not the end of the world. I do know how to cook.” Not usually one for feeling guilty, Jake Woods looked to his father for a little bit of confirmation. Woodsie sighed, not quite the sound Jake wanted to hear. “Come on, Dad. When have I ever given you something that wasn’t edible?”

Woodsie dabbed his mouth with the napkin, smoothed down his trademark moustache and gave the hotel owner a quick glance. “Sure hope you have someone else lined up to cook for you, Mari. Not sure I can handle steak, steak, and more steak every night. Man’s gotta have a bit of variety, don’t you think?”

Her laughter turned more than a few heads which only added to Jake’s embarrassment. “Oh, I understand alright.” She patted Jake on the shoulder. “Sorry, Jake, but I feel their pain. Not that you don’t do a mean grill, from what I’ve heard, but choosing a range of different types of food is always a good idea if you want to keep the family happy.” She picked up his empty beer glass. “I’ve been advertising but, so far, no takers who’re capable of running the restaurant and helping me expand. I’d be more than willing to take on a novice chef if they had the right mindset.”

“Such a shame when you’re doing so well here. Best thing that happened to the town, you moving back and taking on the old place.” Jake leaned back in his chair, glanced around the restaurant, noticed Mari’s son Noah sitting at a table in the corner with a coloring book and a drink, his gaze going to the door every few minutes. Other diners seemed oblivious to the impending doom that was sending his family into decline. “Seems as though there’re going to be a few disappointed patrons who’ll have to go elsewhere for a decent family meal besides us. Shame my lot will starve since my cooking is so bad.”

Cory croaked. “I never said it was bad, Dad. Geez, talk about being a drama queen. All I meant was that I’ll miss the nice kind of food that we don’t get at home. It’s only one night a week we get to go out and try proper cooking, you know.”

His words earned him a quick hug from Mari. Jake loved how easily his son had fitted in with the Moore family. First Mari who had returned to Cherry Lake to bring up her son away from the rush of the big city and then her younger half-sister, Dakota, who’d fallen in love with his friend, Adam Clement, soccer player and idol of Cory’s. The Moore sisters had gone a long way to help fill the void left in his boy’s life since they’d been in town. It was understandable that losing their Sunday night tradition was going to leave him anxious.

“Don’t worry too much, Cory. I’ll make sure the restaurant won’t be closed for too long.” She scooped up another empty glass and stacked them in the crook of her arm. “Now, for her final hurrah, Penny has created a cherry cobbler for dessert that’s to die for. Noah had a small tester earlier and I couldn’t help but try it too. That warm sugary goodness is going to make your taste buds sit up and sing, I promise. Shall I tell her three servings?”

“Sounds good to me.” Jake was in the mood for something sweet to try and banish the sour mood that kept creeping in when he least expected it. “Thanks, and you’d better make Cory’s a double helping. Boy seems to be eating more than me nowadays. Must have a growth spurt happening because he can’t ever seem to get full. I swear, I’ve had to buy him so many new clothes this year too.”

“I train hard with Adam and the guys. ’Course I’m gonna need to bulk up. Gotta increase my calorie intake too.”

“So it’s got nothing to do with girls, all that preening you’re doing in the mirror these days, flexing those muscles of yours or the extra time you’re taking exercising?”

His remark earned him a glare from the teen. “No. Gotta bulk up a bit if I want to play in college. Adam thinks I’m good enough and you always say never let a chance go begging.”

“True, I do.” Even though Cory had a few more years to go before that was a possibility, Jake wasn’t looking forward to letting his son go.

He was the only connection to Lisa and there were days he still missed her more than life itself. He’d started to wonder if it was more a case of missing someone, of having a relationship, that gave him the hollow pain in his gut. He thought he’d mourned and moved on but it was hard to tell when loneliness hit.

“So long as you don’t fill up on junk food, you’ll fill out soon enough. Don’t go trying to rush things.”

Mari laughed and walked away to place their order for dessert.

“So, tell me the latest on how the training is going then?” Woodsie focused on his grandson, giving Jake time to relax and let his mind wander.

He was staring at the door, his mind blank when it burst open and a woman bolted in with all the energy of a small typhoon, a gust of cold wind helping her on the way.

Valentine Kisses is available in the following formats: 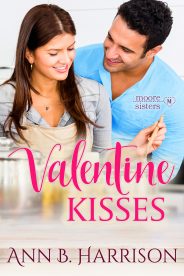 Did you know that Valentine Kisses and many titles are available digitally from Tule's own bookstore? Check it out!