The Brands of Montana, Book 3 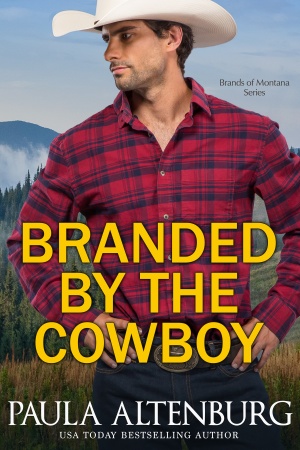 The Brands of Montana, Book 3

Branded by the Cowboy

Easy-going cowboy and roping champion Ben Nichols is at loose ends while his best friend prepares for his wedding. Best man Ben must partner with the maid of honor–not a chore, even if the bride’s sister is as aloof as she is beautiful. Ben’s never backed down from a challenge, especially since this one has a clearly marked expiration date.

Ambitious golden girl and software tester Claire Brand is not acquainted with failure… until recently. Now, she needs to get through her sister’s wedding and back to Seattle before her family discovers her painful secrets. Her hot groomsman partner, who has temporary written all over him, offers the perfect distraction to get her through the next couple of weeks. Why not? It’s been a long time since Claire’s had some fun.

But then, love turns a short and steamy fling into something neither one of them is prepared for.

Claire Brand sat in her car in the parking lot of the Bar-No Sweetheart Ranch, swilling beer from a bottle and staring at the stars. The panoramic view might be astounding, but October nights in Sweetheart, Montana were cold and her peach-colored, slim-fitting, one-sleeved satin bridesmaid dress hadn’t been crafted with that in mind.

She scrolled idly through the photos on her phone with her thumb, glancing at them only occasionally, and willed herself not to cry. It was her daughter’s first birthday, and while the couple who’d adopted her meant well, the pictures of the adorable, curly-haired tot in the pink dress and ribbons pushed Claire’s composure straight to the edge.

She didn’t think she could stand one more minute of all the happiness oozing from her baby sister’s wedding reception when her own heart was broken. She’d tried to convince Alayna that this wasn’t a good day for a wedding—yes, it was selfish—but short of telling her family and friends the whole sordid story, there wasn’t much else she could have done about it. Her new brother-in-law Patterson had refused to get married before Alayna’s twenty-fifth birthday, and Alayna had refused to wait a single day longer than she had to.

They were such a cute pair.

Claire took another long swig of beer and considered digging her coat out of the trunk before she went hypothermic, but she was too tired to care. It took all of her energy to bolster the floodgates. The only tears she’d shed at her sister’s wedding would be ones of joy, and those weren’t looking hopeful.

The passenger door opened and Patterson’s best man slid into her car, the six-plus feet of him sucking up any extra room in the compact space.

He slammed the door behind him, then looked at the bottle in her hand. One eyebrow arced up. “If I’d known this was BYOB, I’d have brought my drink with me.”

Ben Nichols hadn’t changed much since high school. She’d been a year behind him. He’d thought he was God’s gift to women back then, and he still did today. He’d dated at least three of her friends, but thankfully, she hadn’t been his type—meaning easy. She’d been too studious, intent on getting out of Sweetheart and making something of her life.

Instead, she’d screwed it up. Completely pooched it.

She reached behind the bucket seat and tossed Ben a bottle from the box she’d stowed there for the occasion. She wasn’t driving. Alayna had arranged for her to sleep in the Bar-No’s bunkhouse with the other bridesmaids. But she’d wanted to drink alone, and her car was the only private spot she could find.

Ben stared at the bottle in his hand. The stunned expression on his face was priceless.

“What?” Claire demanded, without any real heat. She was too dead inside to get worked up about his opinion of her. “Do I give the impression I’m too good to drink beer?”

“Kind of.” He cracked the cap and tipped the neck of the bottle her way. “But I’m not here to judge. I was told to find you so that the happy couple can have their first dance. You and I are supposed to join them on the dance floor. Remember?”

The cowboy looked as hot as she’d expected in a tuxedo. Really hot. The broadness of his shoulders stretched the fabric of his fitted jacket. When the jacket came off—she was surprised he still had it on now that the ceremony was over—the fine white linen shirt underneath wouldn’t conceal the layers of muscle he liked to show off. Brown hair, and the warm tone of his skin, hinted at hours spent outdoors, as well as a trace of the Salish and Kootenai tribes she suspected lived in his family tree. His light blue eyes were the startling contradiction.

The past few weeks leading up to the wedding had been rough, and watching him flirt with any woman over fifteen, including a great-aunt of the groom who had to be at least eighty, had provided endless hours of distraction. She wasn’t even depressed by the fact the only woman he hadn’t flirted with was her. She was immune to tall, dark, and anything handsome, anyway.

Which was another lie. Wrapped up in her own misery, and anxious to escape so she could check her phone messages, she’d completely forgotten about that first dance. “Just let me finish my beer.” She needed one more minute. That was all.

She leaned across him to open the dash and toss her phone, and the photos, inside.

They drank their beer in silence. For a manho, he at least seemed to know when to mind his own business.

He polished off his beer and then ruined her warming opinion of him. “I’m going to go out on a limb and take a guess that you aren’t enjoying yourself,” he said. “Is it being back in Sweetheart? Is it the wedding? Or is it me?”

Claire cast him a side-eye as she drained her drink. “It’s you.” She took his bottle from him, stashed the two empties in the box behind the seat, then breathed deeply a few times. “Okay. Let’s get this over with. Try not to step on my dress.”

Ben didn’t move. “First, you might want to get rid of whatever bug’s crawling around in your panties,” he advised her, unsmiling. “This is Alayna’s night. She’s happy. Don’t spoil it for her.”

Claire paused with her hand on the door handle, genuinely astounded. “Why on earth would you think I’d do anything to spoil my sister’s wedding?”

“Because she’s been worried about you ever since you came home. She seemed anxious when she asked me to come looking for you.” He eyeballed her with disapproval. “It’s understandable if you’re jealous. I mean, Patterson’s a great guy and he’s my best friend, but the happy vibes they give off are kind of nauseating.”

She got out of the car. Ben exited too. The cold air bit through her thin dress and licked her bare skin. She’d needed a few minutes alone. Was that too much to ask?

“Whatever happened to ‘I’m not here to judge’? For the record—I’m not jealous and I don’t hate Sweetheart. It’s nice to be home and with family. I love Alayna and I’m happy for her and Patterson, who seems to have turned out decent enough.” She wasn’t normally this big a bitch, and he had a valid point about the bug in her panties, so she tried to rein it in. “And you aren’t so bad, although that might be the beer talking. I have PMS. It makes me moody.”

“If PMS makes you this moody, I’d hate to see you pregnant,” Ben muttered under his breath.

His words came at her from out of left field and hit her so hard the pain had her gasping out loud. Her hand flew to her belly—her flat, non-gravid belly—bringing it home once again that a whole year had gone by.

He took a few forward steps as if about to come around the front of the car to her aid, then seemed to think better of it. “What’s wrong?”

“Cramps,” she bit out, waving him off. “Women get them this time of the month.”

“No worries, then,” he said easily, not at all unsettled by a feminine complaint. “I can dance the first dance with Hannah or Mary Beth. I’ll tell Alayna you’re drunk and passed out in one of the barns.”

“Thanks. You’re a real prince.”

But she appreciated his attempt at humor. She straightened, pulling herself back together. She was shivering in earnest now, which helped clear up the alcohol buzz—something she didn’t want—and she wrapped her arms around herself to try and warm up. God, Montana was cold. When she’d left Redmond, Washington a week ago, they’d been having a heat wave.

The ranch’s well-lit, paved parking lot faced the smooth, black-mirrored waters of Flathead Lake. Behind her, the mountains of the Mission Range cut a backdrop against the velvety, star-studded sky. Music and laughter drifted from one of the barns. The wedding reception was in full swing. She sucked in a few lungsful of crisp mountain air. Montana might be cold, but Sweetheart was beautiful enough that she didn’t mind. She was home. She never wanted to leave here again and it was going to be hard when she did.

“I think I can make it through one dance,” she said. She would never, not in a million years, ruin her baby sister’s big day. “I’ll see what I can do to dial the PMS bitchiness back a few notches, too.”

“Much appreciated. For what it’s worth, weddings don’t bring out the best in me either.” Ben shucked out of his tuxedo jacket and draped it around her shoulders. It was warm and held the faint scent of his cologne. “Now let’s see how fast you can hustle in those fancy shoes. I didn’t spend a month taking dance lessons to see them go to waste.”

Branded by the Cowboy is currently available in digital format only: 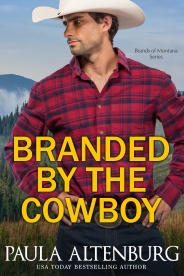 Did you know that Branded by the Cowboy and many titles are available digitally from Tule's own bookstore? Check it out!