Jim “Lucky” Elliott is the country boy next door – charismatic, handsome and charming. But when he has to drop out of vet school to try and rescue his grandparents’ Marietta-based sleigh ride business and family farm, Lucky faces his hardest struggle yet.

Podcaster Rachel O’Rourke is done with broken hearts, but she can still find joy in other people’s happily-ever-afters. When she holds a contest on her show for the best first kiss story, her bruised heart beats a little faster when she reads Lucky’s submission. He doesn’t have a story, but his grandparents do, and free advertising for the winner is just what he’s looking for.

As they start spending time on the farm, Rachel finds herself not only drawn to the sweet setting, but also to the man. But when a real estate developer sets his sights on the Elliott land, Lucky will have to decide if the money means security for his family, or if he’ll fight for Sleigh Bell with Rachel by his side.

Lucky Elliott wasn’t always lucky. Not by a long shot. But that’s what folks in town had always called him, and he’d always answered to it. Good-naturedly, of course. Because that was his thing.

But standing there, looking up at the Graff Hotel with the first snowflakes of the season swirling around his head, he wondered if anyone would ever call him by his given name. Or if they’d ever know him well enough to try.

Hunching his shoulders against the chilly Montana breeze, he reached for the door handle and opened it to a blast of warm, fragrant air. The place always smelled like cinnamon and wood smoke. And home. It was his favorite place to grab a beer whenever he came home from college. He hadn’t been back in a while, though. Graduate school, or trying to stay in graduate school, had overshadowed everything else lately, including stopping in at the Graff, and catching up with his friend who tended bar there.

Lucky looked around the stately old hotel decked out in its holiday finery. Lit wreaths with red velvet bows hung in every frosted window, and a giant blue spruce towered in the lobby beside the spiraling staircase. Silver bells hung from the tree’s branches, reflecting the soft light that spilled out from the bar.

A couple of women walked past and gave him flirty smiles. He grinned back, tipping an imaginary hat. One of them laughed and lowered her lashes, reminding him that he still had a firm grip on that part of his life at least. He’d never had a problem with the ladies. So. There was that.

And then his gaze settled on the bulletin board next to the bar entrance. The spot usually reserved for local babysitting services and cattle dog puppies had a new flyer hanging from it. The big wording caught his eye—a contest of some sort. But it was the prize that he immediately zeroed in on. Winner gets free advertising during the month of December!

He took a couple steps forward, his cowboy boots thudding on the gleaming wood floor. It’s Support Your Local Business Month in Marietta! the flyer said. It was framed with little snowmen and clusters of mistletoe. Lucky rubbed his jaw. Somebody was extremely excited about Christmas.

First Kiss Podcast wants your first kiss stories! If we choose yours for our special holiday episode, we’ll advertise for your business all month long!

He reached out and plucked the flyer from its tack. He sure as hell didn’t have a first kiss story he cared to share, but his grandparents did, and they could use all the help they could get. If he didn’t figure out how to get Sleigh Bell Farm making a profit again… Well, he wasn’t going to go there. At least not yet. What he wanted now was a beer. And some conversation that didn’t include barn repairs.

Rachel O’Rourke looked up when the guy in the sheepskin jacket walked in. It was kind of hard not to.

She’d seen him outside the bar doors while she’d been bussing table four. He’d been reading her flyer. And then he’d taken it down and put it in his pocket. Her heart had skipped a beat at that—a handsome young guy responding to her first kiss contest. But then she remembered he was probably taking the flyer because he had a first kiss story to tell. Which meant he was taken. Which meant she needed to concentrate on getting through her shift instead of daydreaming about first kiss stories, or her podcast finally taking off, or hunky men in Wranglers who looked exactly like young Clint Eastwood with the blue eyes to match.

Picking up a couple of beer mugs with a clink, she reminded herself she was done with men for a while anyway. She was done with their empty promises and fake declarations of love. And she was definitely through with thinking romance was in the cards for her. At least not the kind of romance she talked about on her show. The kind that you bored your grandkids with fifty years later.

Nope. That kind of love she’d just long for from afar. From a safe distance, through her headset and microphone. And maybe a few Hallmark movies on the side. Because, if living vicariously through other people’s happily ever afters wasn’t what First Kiss was all about, well then…

Someone turned on the jukebox, and Bing Crosby’s smooth-as-scotch voice unfurled into the bar like a red ribbon. I’ll be home for Christmas… Rachel wiped down the table and smiled. She loved this song, even though it was bittersweet. It reminded her of her dad. He’d been deployed nearly her entire childhood, and she remembered dancing to it with her mom in their cramped little kitchen. They’d always cried when it came on. She remembered that part vividly.

“Hey, Fancy Face. Look what just walked through those doors.”

“I saw,” Rachel whispered back, hoping Sheepskin Jacket Guy couldn’t hear. He’d just sat on a barstool, giving Shane, the bartender, a friendly tug on one of her braids.

Chloe’s cranberry red lips stretched into a smile. “Well, maybe there’s hope for you yet. You noticed a hot guy. I’m so proud.”

“I notice lots of guys.”

“No. Them noticing you, and you pretending they don’t exist, doesn’t count.”

“Hmm.” Rachel wiped the table down. A soft snow fell outside the windows, making the bar feel cozier than ever. She adored this place, hot guys or no. But what she really wanted to be doing was checking her email for contest submissions.

“Looks like he and Shane are buddies,” Chloe said. “That could work to your advantage.”

Rachel didn’t look up. Just kept rubbing circles into the already pristine tabletop. “Not interested. But you should go say hi.”

“Rachel. Babe.” Chloe put her hands on her hips. “I’m not looking for me. I’m looking for you. Trying to save you from becoming Marietta’s saddest cat lady, remember?”

“We all love our cats, Rach, but they’re not supposed to take the place of dating. Or social interaction.”

“I know you’ve sworn off men for a while, but that doesn’t mean you can’t appreciate from a distance.”

Rachel couldn’t help it. She looked up, and to her horror, Sheepskin Jacket Guy was looking back. But, instead of glancing away like most people did when they got caught staring, he grinned at her. And not just any grin either. The slowest, most tantalizing, panty-dropping grin she thought she’d ever seen in her life. There were dimples. And straight white teeth against tanned skin. And stubble. Stubble that she immediately pictured scraping against her most sensitive places. Dear Lord.

Cheeks burning, she looked back down at the table.

Chloe laughed. “Definitely hope for you yet.”

Christmas at Sleigh Bell Farm is available in the following formats: 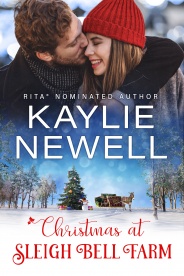 Did you know that Christmas at Sleigh Bell Farm and many titles are available digitally from Tule's own bookstore? Check it out!