His heart has been grounded for so long. But she’s about to give it wings…

Captain Judd Harlow is happiest in the air. It’s only when he’s flying that he can leave his childhood memories behind. But when he and his brothers find themselves the guardians of their 12-year-old half-sister, he knows moving back to the small Montana town where he grew up is the right thing.

When Savannah Casteele learns that a local pilot has agreed to fly her and her little boy to Chicago for a long-awaited surgery, she’s overcome with gratitude. A young, single mother, her first priority has always been raising her son the best way she knows how. But when she sees Judd for the first time, she’s unprepared for the affect he has on her heart: He’s stoic, guarded, and a little out of reach, reminding her that she’s not the only one who’s trying to put aside a broken past.

As they begin falling for one another, brought together by the children in their lives, they start seeing family not just as something you’re given, but something you create. And that the heart, no matter how scarred, is always capable of a tender, new beginning. But are they both willing to take a leap of faith to get there?

Shivering, more from nerves than anything else, she smiled down at Wyatt, who had a sucker bulging in one cheek.

He popped it out with a smack. “Are we gonna fly on a plane, Mama?”

“Are we gonna see my doctor?”

Her heart squeezed as she took him in. Fine brown hair, huge blue eyes, the cruel cleft lip that had marked him since birth. Today was the day. This was the culmination of months of fund-raisers, amazingly generous gifts from the community, and working extra hours all to save money for the surgery which her insurance didn’t cover. Today was the first day of the rest of their lives.

Savannah looked up again, grabbing her long hair and pulling it over one shoulder. It wasn’t just the surgery consultation that was making her nervous. It was the flight to Chicago on a private twin engine Cessna that, to her, might as well be a coffin with wings.

She clamped her jaw shut to keep her teeth from clicking together.

She turned at the sound of the low, male voice behind her. She’d been expecting the pilot any minute—someone she imagined would have threads of gray in his hair, maybe a dad paunch, a friendly smile. Someone who would make her feel better about flying, about this trip in general.

Grinning like an idiot, she let her gaze settle on the man in front of them. And all her expectations vanished like dust in the Montana wind. There was no dad paunch. No threads of gray. Definitely no friendly smile.

Savannah licked her lips, reminding herself to blink. Wyatt squeezed her fingers, maybe sensing she needed to be snapped out of it.

He watched her, his eyes hidden behind a pair of dark aviator sunglasses. That part was pilot-y. But the rest looked more like an NFL linebacker. He wore a pair of faded jeans with a worn leather belt, and heavy boots. A white, Montana State T-shirt stretched across his thick, broad shoulders, which gave way to an obviously muscular chest. His short brown hair was messy and windblown, the scruff on his jaw awakening something in her that had been dormant for a long time. Like butterflies waking up against her rib cage.

It was impossible now to tell whether she was nervous because of the impending flight, or because she’d be flying with him.

He stepped forward, still not smiling. Still not putting her at ease in the least, and extended one huge hand that reminded her of a grizzly’s paw.

She shook it, trying to ignore its warmth, its male roughness.

Judd Harlow looked down, and this time his lips tilted a little. “Hi, Wyatt.”

Savannah was trying not to stare. He was older than she was, for sure. It was hard to gauge because of the glasses, but she guessed he might be in his early thirties. She knew he was a commercial airline pilot for Southwest, and had just moved back to Marietta to help raise his orphaned half sister. He was her best friend’s boyfriend’s brother, and that was about the extent of what she knew about him. But when she heard that he’d agreed to fly her and Wyatt to Chicago for his consultation and surgery, he’d occupied a special place in her heart. Stranger or no.

She smiled, trying not to be too unnerved by his looks, or the way he stood there so casually unaffected while her heart pounded like a maniac. She could smell his faint aftershave on the breeze, and her belly tightened. “Thank you for doing this,” she said. “I really can’t tell you how much we appreciate it.”

“Not a problem. All ready?”

She nodded, gripping the handle of her bag a little too tightly.

He watched her. “Nervous?”

I’ll take care of you…

Savannah wasn’t used to being taken care of. She always did the care-taking. The one who brought the fevers down, the one who paid for school clothes, the one who worried over doctor’s appointments and shots and skinned knees. She was afraid of taking too much comfort in that sentence. But she wanted to.

“Have you flown before?” he asked.

“Once when I was little. But not since then. And Wyatt never has.”

He glanced down at Wyatt who was still working on his sucker. “You’re not nervous, are you?”

Wyatt grinned and shook his head.

Judd reached for her bag. She handed it over and felt the immediate tingle of blood returning to her fingers.

He wasn’t warm and fuzzy. Far from it. In fact, he was intimidating as hell, but the way he said that just now, made Savannah want to fall into his arms.

She followed him inside the hangar which smelled like fuel and rubber, and where the roar of jets on the runway was slightly muted. A shiny, twin engine plane sat waiting in the shadows. It was snow white with two royal-blue stripes running horizontally down the sides. If she was an aviation person, which she wasn’t, she’d say it was beautiful.

He opened the luggage hatch and put the bag inside. It was a three-hour flight to Chicago and Wyatt’s appointment wasn’t until late afternoon, so they’d chosen to stay overnight. Judd had only a small backpack, which he tossed next to hers before closing the hatch.

“Cessna 340,” he said, glancing over his shoulder.

“That must be expensive. To own, to operate. That kind of thing.” It was absolutely none of her business. But she was having a hard time shutting her mouth, and the sound of his voice was oddly soothing.

“It can get that way. I charter some flights on the side to help offset the costs.”

Good. That was good. That meant he flew all the time. For a living. In his free time. Maybe on the weekends. And the more he flew, the more experienced that made him, and the better she felt about climbing into this thing with her only child in tow.

Savannah pulled their emergency pack of Goldfish crackers from her purse, but looked at Judd for permission before giving them to Wyatt. If the plane was as pristine on the inside as it was on the outside, he might not appreciate cracker crumbs between his seats.

She tore the bag open and handed it over. She didn’t think she’d be able to eat if someone paid her.

Rubbing Wyatt’s back, she watched Judd walk around the Cessna. His T-shirt rode up as he pushed the vertical door up, exposing a sliver of muscled abs. Not much, but enough to make out a dark line of hair that disappeared below his belt.

He turned and took his glasses off. “Ready?”

She wasn’t quite prepared for how he’d look without them. She should have been. The man’s body was a work of art, it was a good bet the rest of him would match. But his eyes were a shade of blue reserved for the ocean on a cloudy day.

He smiled, and for the first time, she noticed two long, deep dimples cut into each cheek. He looked so much like his brother Luke that she could only stand there and stare for a second. It had been so long since she’d noticed a man’s smile. Since she’d noticed a man’s anything, for that matter. When Steven had left, she’d had to put her head down and concentrate on raising Wyatt the best she knew how. She didn’t have time for dating. The truth was, she gave most of herself to her son, and happily. What was left over was so thin, you could see right through it.

The thought was like a splash of cold water to her face. The consultation, the surgery, poor little Wyatt… All of a sudden, the day felt so overwhelming, she thought she might be sick.

“I’m sorry…uh, is there a restroom I could use before we take off?”

“Right by the entrance. To your left.”

She did remember. She’d insisted he go roughly a dozen times before they left for the airport.

She glanced at Judd, her stomach rolling. “Thank you. We won’t be long.”

Savannah couldn’t remember the last time she’d been able to take her time with anything. Much less in the bathroom. Wyatt had a habit of telling her knock-knock jokes through the door.

But they always made her laugh.

Judd’s Vow is available in the following formats: 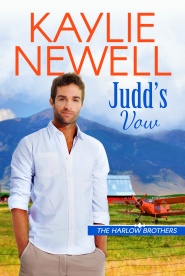 Did you know that Judd’s Vow and many titles are available digitally from Tule's own bookstore? Check it out!