New Orleans Police Detective Rick Easterling is no saint. He’s the NOPD’s best undercover cop. Known as the Man of a Thousand Faces, he’s a rogue–breaking rules to solve cases his way. But when his brother dies of a drug overdose and he’s suspected of being a dirty cop, Rick vows to clear his name and avenge his brother’s death.

Rookie police officer Lusinda Johnson has a personal axe to grind with dirty cops, so she volunteers to work undercover and shadow Rick. She tells herself she can remain immune to his sexy, brooding demeanor, but the longer they work together, the harder it is to see him as anything other than a hero.

As “Sin” and Rick investigate the corrupt underbelly of New Orleans night life, the lies they must tell each other imperil them almost as much as the drug lords closing in. Will they learn to trust each other in time to save themselves and explore their growing love?

This was the worst part of the job. Baton Rouge Police Officer Lusinda Johnston glanced toward the entrance to the alley, where her partner was talking with the woman who’d called 911. She knelt and gingerly placed her fingers on the neck of the young woman they’d found in the alley. To her surprise, she felt a very faint pulse. With her other hand, she pressed the talk button on her shoulder radio. “Officer Johnston here. I need an ambulance at 801 South Bendix Street, STAT. Apparent OD. Victim unresponsive.”

“Affirmative,” Lusinda said, moving her fingers to the other side of the girl’s neck. “Hurry!”

DWI Task Force Sergeant Victor Fouchere turned on his flashlight and walked the short length of the alley, searching the ground. “Nothing unexpected here,” he said. He shone the flashlight on the victim’s face. “You get a pulse?”

“Barely. I’m not sure she’s going to make it.” Lusinda’s throat threatened to close up at the words. “Hey, sweetie. Wake up. I’m a police officer.” There was no response. “Come on,” she said more loudly. “Talk to me.”

“Did you check for tracks?”

“I’d hardly call them tracks.” Lusinda pointed to the inside of the girl’s elbow. “I see five puncture marks.” She swiped at the girl’s skin and held up her gloved hand. “Look. She’s used makeup to hide the punctures.”

“There’s the ambulance.” Vic nodded in the general direction of a faint whine of sirens.

“Vic, I don’t think she shot herself up. There’s no paraphernalia anywhere.”

Fouchere squatted with a groan, and quickly examined the girl’s arms and neck. “Looks like you’re right, unless she’s been shooting up between her toes.”

“Should we give her a dose of Narcan?” The sirens were fast getting louder. That answered her question. The ambulance was here. Just as she felt the familiar distorted wail in her ears, the vehicle roared up. Lusinda moved out of the way as two EMTs jumped out and rushed over.

“I’m Sergeant Fouchere,” Vic said. “This is Officer Johnston. Got a call from the woman who lives there—” Fouchere gestured “—that she heard a car door slam and tires screeching. She came out with her dog and found the victim. No ID.”

The EMTs checked the victim. “Pulse is thready,” one of them said. “We got to get her on a ventilator or we’re going to lose her. Did you give her Narcan?”

They loaded the victim onto a gurney and into the ambulance. Within a couple of minutes it sped away, sirens blaring.

Lusinda looked around the alley and then walked out to the street and glanced up and down. It was a residential area. Houses probably built in the fifties. “Nice neighborhood.”

“Well, you would know,” Lusinda teased.

“Hey, forty-eight is not old. You wait and see, Tadpole. You’ll get here soon enough.”

She’d been Tadpole to Victor Fouchere from the time she was a child tagging along with her dad to the precinct when he’d had paperwork to catch up on. She’d always called him Uncle Vic. Now, however, he was Sergeant Fouchere, at least in public.

She knew he was responsible for getting her the position on the department’s DWI Task Force—he and her father’s memory. Working the midnight shift, patrolling the streets for drunks and druggies was not easy, but it was a fast track to experience and respect within the department. She’d even worked a few short undercover operations to ferret out drug dealers or find and pick up underage prostitutes. But this, finding a person dead or dying, was the worst part of the job.

“You think she’ll make it?” she asked.

“So how long are you going to make me check the bodies while you talk to the rubberneckers or search the ground?”

Vic pulled a cigarette out of his uniform pocket and lit it. “Long as I want to, Rookie. Rank has its privileges, right?”

“Yes, sir, Sergeant.” She smiled. Vic had a way of teasing her, reminding her of her place and making her feel safe and loved, all at the same time.

Lusinda glanced back at the place where the girl was found and let her gaze trace a path from there to the street. The old, cracked asphalt didn’t show much. There was no syringe, no tie-off, nothing. She was almost positive that the girl, who was probably no older than sixteen or seventeen, had been dragged into the alley.

“Uh-oh,” Vic muttered. She looked up to see him shaking his head as he pinched the fire off the end of the cigarette butt, ground the glowing bits of tobacco into the asphalt, then stuck the butt into his pocket. He’d taught her not to drop anything, not even a toothpick or gum wrapper, at a crime scene. “Listen to me, Officer Johnston. This is nothing but an OD. It’s sad, sure. She got some extra strong stuff and bam, her prom night ends up being her last night. Way it goes.”

“Can I just tell you what I’m thinking?” Lusinda waited until she saw Vic’s reluctant nod. “From what the woman who found her said about hearing the car door and then the tires screeching, I think somebody shot her up, then dumped her here.”

Vic started a second cigarette. “Right. What evidence do you have that she didn’t shoot the dose herself?”

Lusinda knew that no other veteran officer in the entire force would be as patient or as kind to a two-year rookie as Vic was to her. She was grateful that he’d taken her under his wing. “I don’t have hard evidence. I know the absence of paraphernalia isn’t necessarily hard evidence. But that girl is not the type. I can see her agreeing to try some dope, but did you notice her nails and hair? Both expensive. I’ll bet her teeth are straight as an arrow and white as snow, too. She only had five punctures on her left arm, none on her right. Somebody, maybe her boyfriend, has given her a few shots. Tonight he gave her too much.”

Lusinda trailed off as she thought about the girl in her little party dress and high-heeled sandals. It could have been Lusinda herself. She’d been around the girl’s age when she’d run away from home. She’d had a rough couple of years before she’d gotten herself together. “I want to call out the crime scene unit.”

Vic walked over to the edge of the pavement and pointed. “Here are the tire tracks, where they peeled off. Looks like somebody pulled her out of the car and dragged her about eight feet.” His finger sketched a jagged line made by the heels and backs of her shoes. “Did you look at the girl’s feet?”

“You were trying to wake her up.”

Lusinda bent down to look where Vic had pointed on the ground. “And, I didn’t find any drag marks.” She straightened. “Good eyes, Vic. So what do you say? The crime scene unit might get a make on the tires, and even the car. If we catch a big break, something might have fallen out of the car and rolled away—like a needle, a baggie or a bottle top. Something with fingerprints on it. Because somebody killed her with that dose of dope and now they’re out there partying and not caring that she’s probably dead.”

Lusinda shook herself. She couldn’t get the girl’s face out of her brain. “Sure. Just give me a break and you take the next DB please.”

“We’ll see,” Vic said as he looked at his watch. He sighed. “Okay. So we call the crime scene unit. Don’t worry about me, Tadpole. I don’t need any sleep. My wife will understand. We’re heading down to New Orleans tomorrow, to celebrate our twentieth anniversary. I guess I can sleep in the car.”

Lusinda laughed. “Don’t give me that. You just declared that you’re not old. Besides, I’ve known you to work double shifts two days in a row and then drive to Florida.”

“I said I’d call ’em. You’ve got a pretty good track record with these theories of yours. Reminds me of your dad.”

He pinched the fire off his cigarette and stowed the butt in his pocket, then pressed his radio call button and requested the crime scene unit.

No Saint is currently available in digital format only: 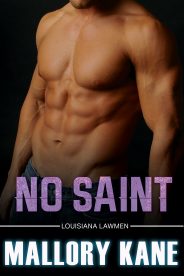 Did you know that No Saint and many titles are available digitally from Tule's own bookstore? Check it out!