Can she risk losing her heart to him a second time?

Nuptials, gowns, and rings don’t register on Molly McCleary’s to-do list. However, to keep her fledging photography business afloat, she’s up to her eyes in brides. Then she’s offered a dream shoot documenting the renovation of a local historic property. So tempting – except her client is her high school sweetheart who walked away with no explanation and without looking back.

Successful developer Adam Larson longs to redeem himself with the people in his hometown, Cupid’s Corner in New England. He impulsively buys a rundown farm that holds precious memories intending to restore the barn to its former glory and create a destination wedding venue. He needs a marketing edge – the talents of Molly, who is more beautiful, sassy and determined than he remembered.

As they spend time together, their inevitable past attraction kicks in and grows. Adam soon realizes Molly still holds his heart. Can he persuade her to give them a second chance at love?

Adam Larson tossed down his pencil. It hit the pad he’d scribbled figures on with a dull thud. Leaning back, his chair squeaked. Need to fix that. The noise echoed in the quiet, efficient construction trailer brightened by the overhead fluorescent lighting.

He rubbed his hand over his face and then gazed around at the three other desks—their occupants sane enough to leave for the weekend already. Unrolled blueprints covered the main table. A row of corkboards with haphazard papers and safety rules pinned on them and write on wipe off boards filled with diagrams and notes of present and future jobs hung on nearly every inch of the walls.

The sudden ring of his desk phone jolted him.

He snatched it up. “Larson here.”

He grinned at his executive assistant’s exasperated tone. “Mrs. Sanderson, that’s funny, because I knew you’d be calling.”

“So, why are you still there?”

She chuckled. “Oh, what am I going to do with you? Look, in roughly ten minutes there will be a knock on the door. Answer it.”

“Bossy. What is it? A singing gram?” He was definitely punchy after the long work week. They’d come in before deadline and under budget—two of his favorite things as the owner of the company. He let his staff and crew knock off hours earlier as a small reward. He stayed working on the next project—estimates, materials, and a list of contractors needed.

“Your dinner. Thank me later.”

Adam sighed. “A bonus or a vacation?” This woman was a treasure.

“You just gave me both. It was great to visit with your mom and dad again in Florida. My kids and grandkids had lots of fun at the beach…” In the background, excited voices rushed down the line. “Speaking of which, that’s them now storming in. Game night.”

“See you Monday morning.” Adam hung up, shaking his head.

Without Mrs. Sanderson, who hired him nearly six years ago for his first real, full-time construction job, taught him the inside out of the business—even after he jumped to another firm for a promotion and better pay—and then agreed to join him when he started his own, he’d never have come so far so fast.

With drive and determination, he’d beaten the odds of a predetermined outcome for the kid from the wrong side of the tracks.

He’d found his niche in the crowded construction business. He made a very good living out of renovating old, broken down, neglected buildings and houses, pumping new life into them. A fixer, as Mrs. Sanderson dubbed him.

When he heard the low hum of the engine and the tires crunching on the gravel stones drawing near, he shoved back from his chair. He got to the door at the same time the rapid knock sounded.

Adam opened it to find the delivery driver holding the large paper sack with the high-end, award-winning restaurant logo stamped on the side. “Afternoon.”

“Closer to evening.” The older guy nodded to the sun low in the sky.

The warm orange ball shimmered in the distance. It reminded Adam how much time he’d lost today. Again.

“What do I owe you?” He grabbed for his wallet out of the back pocket of his jeans.

“Tip?” He pulled out some bills.

“Taken care of already.” The middle-aged man grinned as he handed over the bagged meal. “Over thirty percent. The best kind.”

Mrs. Sanderson thought of everything. “Thanks. Have a good one.”

Adam waited there on the small landing, as the guy backed out in his blue compact car, and watched the glowing sun.

It tumbled Adam back in time when he was a teenager. He stood transfixed at the reminder of how happy and satisfied he’d been after finishing up work on Pickens farm, sitting in the open door of the hay loft to stare at the gorgeous sunsets—precious moments in his hometown of Cupid’s Corner, a place he’d turned his back on over six years ago.

He’d hurt so many people, especially…

“Molly.” His heart squeezed in his chest.

He drew in a deep breath, still aching.

Pulling himself away from the view and from his guilt, he returned to his desk with the slam of the door still rattling on its hinges.

His mind drifted as he ate the delicious steak dinner. The tug of his computer was too much to deny. He powered it up, went online, and then debated on his next move.

Adam went there. He clicked on the saved link for Cupid’s Corner Gazette, swallowing hard as the memories of simpler, sweeter times hit. A low, dull ache ribboned through him.

You gave it up. Why the pull back?

The familiar red banner and logo for the paper popped up. A tug of pride mixed with a bout of regret for not being a part of it any longer whispered through him. Adam scrolled down and stopped dead in his tracks.

“Pickens’s barn!” The two pictures of the recent damage to the building grabbed his attention first. He quickly read the article on the dismal outlook. His heart sank. “Mr. Pickens, no. Don’t sell. Not to them for a housing development.” Adam had visions of the quaint family farm wiped out down to the dirt.

He’d worked in the business long enough to know these kind of developers destroyed the old and replaced it with brand-spanking-new houses stuffed side by side together. The hill where the farm sat was prime property. There might be a fancy golf course involved to make it even more desirable to lure in big money outsiders.

A sickening sensation dropped in his belly, cold and hard.

Going back to the pictures, his mouth dried. He gulped, but his throat turned to scratchy sandpaper. The byline. “Molly McCleary.” His heartbeat hammered. “She never married?”

Staring at her name one letter at a time to imprint it again, Adam allowed the enormity of what he’d done to her seep into all the places he’d set up roadblocks for so long. Because trying to hold it back for years hadn’t done a thing for his conscience; it still plagued him, always on the edges of his thoughts—burning and itching to break through.

Had she even come close to getting it?

She deserved happiness. She deserved to live her dreams—all the ones she longed for and told him about—not have a tiny byline on their small hometown newspaper.

“Did I ruin everything for you?” Adam’s voice cracked.

He glanced at her name, the damaged barn photos, and then back again. His mind clicked with thoughts and possibilities, connecting the two broken pieces into one whole.

Adam thrived on repairing and patching things together to make them come alive again. Buildings, yes. Broken dreams? Not so much.

He’d righted most of the wrongs in his life, except one. Molly.

“Did you…ever forgive me?” Deep down, he hadn’t even forgiven himself, so most likely she hadn’t, either. “Can I fix this? Can I make this right for you?”

As he talked out loud in the eerie quiet, a plan began to form to give her back a little bit of what he’d taken away…

Picture Perfect Bride is available in the following formats: 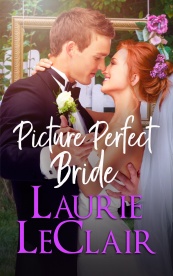 Did you know that Picture Perfect Bride and many titles are available digitally from Tule's own bookstore? Check it out!