She believes in family…

Ever since Kennedi Chase was a little girl, she dreamed of one day owning her mother’s bakery boutique, Chase Confections. Now that she does, she’ll do everything she can to keep it running. When a hotshot businessman—emphasis on hot—threatens everything she holds dear, Kennedi bakes up an unconventional plan to protect her family legacy.

He believes in himself…

Real estate developer Trenton Shaw will do anything to succeed. After a bitter divorce, he’s poured his heart and soul into achieving his professional goals. A new parking garage on the Washington D.C. Wharf is essential to his casino. He won’t let a cake baker get in his way, no matter how gorgeous, tenacious, and irresistibly charming she seems to be.

There’s no denying the sizzling attraction as professional entanglements become highly personal. But when Trenton discovers Kennedi’s secret, she’s forced into a desperate choice. Should she protect her family or her heart?

Standing before the rich mahogany doors of the Belle Haven Country Club, Kennedi handed her invitation to the waiting security attendant, who studied it, then her, and then the electronic pad in his hand. Hard lines creased between his sparse blond brows.

“Kennedi Chase of Chase Confections,” she said while stealing a glance at the invite list.

“You’re not on here.” The severely chewed nail tip of an index finger scrolled down the list of names. “Wait.” His head sprang up. “I have a Mr. K. Avery Chase.”

“I’m pretty sure that’s me.” She retrieved her driver’s license from her black beaded clutch and flipped it before him. “Kennedi Avery Chase.” His brow crinkled again. Typical reaction when one associated the name with a woman. Her father’s namesake, she wore the name with pride.

“Got it.” He pulled open the door then hurried on to the people fast approaching behind her.

She looked around at those milling about the lounge elegantly clad in suits, fashionable gowns, and sparkly cocktail dresses. I should’ve worn black. The shimmery red dress hugging her slight curves stood out like a flaming beacon. And the added bronzer she’d applied on her toffee-brown skin, that practically glowed, didn’t help. A subtle tug at the bodice confidently confirmed that the double-sided tape securing her boobs behind the slippery satin held firm. She thought of it all as apprehension started to coil a knot in her belly. Having come this far, there was no sense in chickening out now.

Okay, Kennedi, you can do this.

Taking a fueling breath, she made her way to the packed banquet hall and scanned the room for her intended target in between small chitchat with a few familiar faces. Catching movement out of her peripheral view, she turned her head, and there her enemy stood, appearing in deep conversation with two other men. Trenton Shaw. As if on cue, steel-blue eyes slid her way. The internet had his age at thirty—that worked in her favor. His online pics suggested he was tall—six two. Maybe even six three. She was just under five nine herself. Her stilettos would bring her just shy of eye level with him—another advantage. His golden tanned features made her wonder if he tended to darken even more after the East Coast heat of summer bore down on him for three months.

You catch more flies with sugar than vinegar. She forced a smile at the admittedly handsome figure dressed in an impeccably fitted, light pinstripe gray suit, his hands in the front pockets of neatly draped slacks. He subtly inclined his head in greeting yet refused to break the tether of their shared gaze. That stare of his held unwavering as he pulled his phone from his right front pants pocket, gave a few taps upon it and stepped away.

Getting a light bump from behind, she turned and accepted an apology from the woman who’d caused the minor infraction and who did well in not spilling her three filled champagne glasses while squeezing a purse underneath an armpit. Kennedi turned back. The two other men remained in place, heads angled close, gabbing away. She searched the crowd. As if a mere specter, Trenton Shaw had all but disappeared.

Damn it. Now that he’d poked his head out of his bat cave, she couldn’t allow him to escape her.

After ambling about, just when she’d settled on calling the night a fail, there Shaw stood at the rear by the buffet table with his cell phone still glued to his ear and his back to the crowd. She took note of the big, burly, bald guy dressed in all black standing near Shaw. Trenton Shaw’s personal security kept a comfortable distance, yet the guard’s alert blue eyes seemed to take in the entire room.

Unlike those smart enough not to disturb Shaw’s protective bubble, she approached and came up alongside him. He lifted his gaze to hers, delivering a long look, while not skipping a beat in his dialogue of quarterly projections and cost estimates to the party on the line. Kennedi turned away from his probing steely blues and heard him say, “I’ll call you back.”

See Me is available in the following formats: 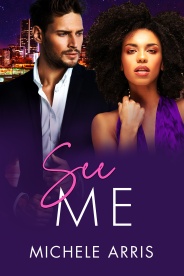 Did you know that See Me and many titles are available digitally from Tule's own bookstore? Check it out!