With his competing days behind him, Wyatt Marshall has settled into ranching life in Marietta, Montana. But with the Copper Mountain Rodeo, his only exception, just around the corner, the last thing he needs is a distraction – especially one in the form of a pretty, yet vaguely familiar country singer.

For Claire Miller, it’s been almost a year since she fled Las Vegas with only her purse and the clothes on her back, and she’s been laying low in Montana with a new image. When she and her country band travel to perform in the small town of Marietta, she doesn’t plan on getting stranded there for several days. Or for an innocent offer to stay at a nearby ranch to turn out to be more than she bargained for: she recognizes its owner to be the same sexy cowboy she got hot and heavy with – then stood up – in Vegas.

With the passion flaring between them and Wyatt getting closer to putting the pieces together, Claire is ready to run again, not knowing the danger that sent her fleeing in the first place is close on her heels.

“Tell me again how you got that obscenely large belt buckle, cowboy?” There was a soft click as the woman turned the empty shot glass upside down on the bar.

Wyatt Marshall had a type and the lady across from him most definitely wasn’t it. She drank like a cowboy, swore like a sailor, and looked like a punk rock goddess.

And yet here he was. Flirting his country heart out with a tough as nails city girl.

“Took first place in tie-down roping at the NFR.”

Just saying the words again sent a rush of disbelief, pride, and exhilaration through him. First place in the National Finals Rodeo. It still seemed surreal. Ever since he’d started competing, he’d dreamt about this kind of success. He’d worked his butt off for it for nearly a decade. Traveling to endless rodeos and practicing by roping anything and everything when he wasn’t competing.

He smoothed his thumb over the buckle again, just to remind himself it had really happened. He only wished Pops could’ve lived long enough to see his win.

The thought of his dad sent a crushing pain through him—one he’d gotten used to—but he pushed it aside. Tonight wasn’t for mourning. It was for celebrating. Pops would’ve demanded it from heaven.

“The NFR.” The woman across from him smiled. “Ah, right. That little rodeo thing in town.”

There was nothing little about the National Finals Rodeo in Las Vegas, and he suspected she knew it too by the glimmer of amusement in her dark brown eyes.

Even though there weren’t stars in her eyes, or giddy excitement like some of his fans had, she was sincere.

Which he thought he might just prefer. While he loved winning at rodeos big and small, he wasn’t altogether comfortable with the buckle bunnies that threw themselves at any man with a winning buckle.

Which was why he’d ended up in this dive bar instead of one of the popular ones blaring country music with his friends. He didn’t want the attention tonight; he wanted to process the win alone. In the empty corner of a dark bar that wasn’t quite even half full.

Her lips, full and glossy, curved into a grimace. “Please, just call me Sin. Ma’am sounds like you’re addressing my mother.”

“Is Sin your stage name?”

“What do you think?” She lifted one bare shoulder beneath the tiny black leather dress in a shrug.

Even though she seemed to embody the name itself, he supposed it had to be a stage name.

He hadn’t noticed the band on the stage until a throaty female voice began to belt out a Bon Jovi song. He’d finally glanced up, locking his gaze on Sin, and hadn’t looked away until the band had finished their set and abandoned the stage.

Wyatt had wandered over to the bar where she was grabbing a beer and offered to buy it for her. She’d glanced around, maybe looking for someone. After a moment’s hesitation, she’d countered with a shot of tequila.

Three shots and one hour later, and he was even more intrigued by this woman. Not to mention starting to get a little buzzed. Those three shots had been in addition to the two beers at the table.

She was beautiful. Black hair so straight it looked like a waterfall sluicing down her scalp. Too much eyeliner and dark eye shadow just made her brown eyes seem even bigger.

Likely her appearance capitalized on the rock music she sang. And maybe she looked like she slayed vampires in her free time, but she also managed to appear delicate with her doe eyes, apple cheeks, and petite curves.

“Oh.” She bit her lip and grimaced, looking back toward the kitchen. “Well the food here isn’t amazing, but their fish and chips are decent—”

“Not here. I want steak. A good one.” He named off a restaurant that was world renown and she went still.

“That’s an awful lot of money to spend on a piece of meat with a girl you barely know.”

“I’m in the mood to celebrate tonight. And what better way than with a gal named Sin, in Sin City. My treat.”

“You know I actually realized it the moment I said it, so I can’t argue with you on that.” He laughed.

She smiled and then narrowed her eyes. “Shouldn’t you be hanging out with all your rodeo friends? Fans?”

“That’s not really my style.”

“Really?” She looked skeptical for a moment, then nodded. With a tilt of her head, she gave him a pointed look. “I want to get one thing straight. If I go to dinner, it doesn’t mean I’m going to sleep with you.”

“Never presumed you would.” Yet the more he stared at her lips, the more he wanted her to.

She looked hesitant, though there was no denying the glimmer of interest in her eyes. “Let me grab my bag.”

A few minutes later she led them down a quiet hall that must’ve led to the backdoor. She stopped suddenly, and turned to face him.

“This isn’t normal for me, just so you know.” She stared up at him from beneath her lashes. “Going to dinner with some strange guy I just met. I don’t care what kind of image I portray on stage. I don’t usually do this kind of thing.”

Why that sent a whisper of exhilaration through him, he couldn’t say. “Neither do I. Think it’s the tekillya?”

“It might be the tequila,” she agreed with an unsteady laugh, but then sighed. “Then again it might just be you.”

His chest expanded with his next breath. Pure masculine pride and need slammed through him. He took another step toward her and palmed the wall on either side of her head.

Her eyes widened with surprise, before narrowing again. Amusement danced in her gaze, along with something else. Heated attraction. “You’re pretty damn cocky, cowboy.”

He lowered his head, determined to just have a quick taste. He needed to know if the mouth that had just belted out “Livin’ on a Prayer” could be as soft as it looked.

Soft, lush, and with the sweet bite of tequila. She tasted like her name. Sin. Forbidden and so damn good.

She made a small murmur of surprise, moving closer to him. Her arms looped around his neck as she kissed him back in a tentative, exploring manner.

They fell apart after a minute, both dragging in ragged gasps of air. He wondered if he looked as dazed as she did.

She shoved a hand through her hair. “Maybe we should go to dinner before I start making bad decisions.”

She bit her bottom lip that was slightly fuller after their kiss. “I guess we’ll find out.”

“After dinner.” She slipped beneath his arm, but caught his hand and tugged her after him down the hall. “I want that steak.”

They dined at a dark, intimate table in an obscenely expensive steakhouse. The conversation was light and never too personal. The wine flowed as they savored each bite of the steak and side dishes they ordered.

Why the hell he was so drawn to her, Wyatt couldn’t have explained. Even to himself. He found every reason to touch her. Stroking the softness of her knuckles while she recounted an amusing story about performing once with the flu. Pushing back a tendril of hair that kept falling over her eye. Her eyes. It was those big, dark eyes he couldn’t stop looking into.

She placed a hand on his thigh when he made her laugh and he wanted her with a ferocity that was unparalleled.

Leaving the steakhouse, they could barely keep their hands off each other in the back of the taxi.

He kissed the nape of her neck, while on the phone to upgrade his room to a two-thousand-dollar a night suite.

There was no reason to worry when he gave her fifty dollars to grab condoms and snacks, telling her to meet him upstairs in his room.

So he sat on the plush couch in the suite, a bottle of champagne in his hand, thinking about how the curvy body would feel beneath his hands. Beneath him.

He waited in the darkness for the knock on the door that would announce her arrival.

The minutes ticked by.

Even as daylight lit up the room, he still watched the door with bleary eyes as he dozed in and out of a light sleep.

Then it came. The knock he’d been waiting for.

But it was only housekeeping, and he was late in his checkout.

A little hungover and annoyed as hell, he went to pack for his flight home to Montana.

Maybe he was on top of his game in the rodeo world, but romantically he could still get outplayed by a slick, city chick.

Protect Me, Cowboy is available in the following formats: 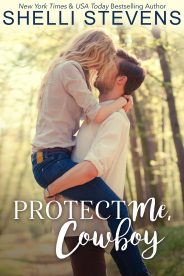 Did you know that Protect Me, Cowboy and many titles are available digitally from Tule's own bookstore? Check it out!