The Gallaghers of Montana, Book 2

The Gallaghers of Montana, Book 2

Escaping a toxic relationship with her father, barrel racer Honey spends as little time as possible in Marietta. Home for the 78th Annual Copper Mountain Rodeo, a brief fling with the town’s hottest new doc might be just the thing to distract her until she can leave again.

But when a riding accident strands Honey in Marietta, an affair meant to last a few nights turns into something much deeper, leaving both Sean and Honey torn between the safety of saying goodbye and the heartache of losing what they dare not admit they’ve found — one true and lasting love.

The ladder started it all.

The 78th annual Copper Mountain Rodeo had come to town. Main Street was barricaded at either end, closed to all but foot traffic. Earlier that day the parade had kicked off the festivities. The shops, both old and new, had been open all day, and the owners were now getting ready for the customers they hoped would stop by during the street party on Main Street later that evening.

Sean Gallagher headed to Grey’s Saloon to meet up with his old friends, Wyatt and Cal Marshall, before the evening festivities really began. Main Street was bustling, due partly to its new growth. Sean wasn’t sure he liked it. Marietta was the quintessential small-town Montana, and he hoped it stayed that way.

He heard a “watch out!” and jumped back as a falling ladder missed whacking him in the head by inches.

“What the hell?” He looked up to see a woman dangling from a low rooftop, obviously about to lose her grip any minute.

“I’ve got it. Get out of the way.” She tried, unsuccessfully, to haul herself up.

She looked down at him. “Okay, but don’t blame me if you get hurt.”

She let go and dropped into his arms. He staggered, but held up. She was a lot sturdier than she looked.

She was also gorgeous.

“Thanks. I owe you.” She flashed him a smile and he sucked in his breath.

Damn, she was a looker. Way too young for him, unfortunately. Early twenties max, he decided. “No problem.”

“Sean?” The grin turned to surprise. “Sean Gallagher? Is that you?”

Still holding her, he said, “Guilty. Do we know each other?”

“I’m sure I’d remember you if we’d met before.” No way would he forget such a beautiful woman. She was a cozy, totally female armful, which reminded him how long it had been since he’d held a woman in his arms. Wearing jeans, cowboy boots and a worn T-shirt, she looked like a cowgirl. But she smelled like flowers. Not a sweet, cloying scent, but fresh and crisp.

He stared at her and she stared right back. Her midnight-black hair was pulled back in a single braid. Gorgeous blue eyes, dark lashed and full of humor, held him fascinated. Delicate features, with high cheekbones and a lush, kissable mouth. A firm, determined chin. The killer smile that curved her lips was a temptation all its own, but added to the rest of the package, it blew him away.

What the hell was he doing hanging on to her? Hastily, he set her on her feet.

“Thanks,” she repeated, wiping her hands on her jeans. “I suspect that would have hurt.”

“Ya think? What were you doing up there?”

“Stringing lights. The shop owners wanted their building to stand out, so they wanted it outlined with lights. I was drafted to get them up before tonight.”

Sean looked up at the building where part of a strand dangled. “You shouldn’t be up on a ladder that tall without someone to steady it.”

“Yes, well, I didn’t have anyone. Anyway, it was the bird’s fault.” She waved a hand at the building.

“The bird. The one that didn’t want me near its nest.” She sighed. “It was dive-bombing me and I lost my balance.” She picked up the ladder, and with some difficulty, propped it against the building.

“What are you doing?”

“I told you. Putting up lights. They aren’t going to string themselves.”

“Do you have a death wish? You could have been badly hurt and you’re trying again?”

She shot him an amused glance. “Read the shirt. I run barrels. I’ve had a lot of practice falling.”

“You’re not going to do it on my watch.”

“Someone has to. Are you volunteering?”

“Damn straight, I am. Steady the ladder.”

“Yes, sir,” she said, giving him a saucy salute.

Sean gave her a dirty look and climbed the ladder. It didn’t take long to finish the lights, although they had to move the ladder several times.

“My hero,” she said when he’d finished, fluttering her eyelashes. “How can I thank you?”

Oh, he could think of several ways. None of them appropriate.

She must have read his mind, or at least his expression. With a gurgle of laughter, she stepped close and laid a hand on his arm. Standing on her tiptoes, she tugged his head down and kissed his cheek. “Thanks.”

“That wasn’t exactly what I had in mind.” He wanted to know what that luscious mouth would feel like beneath his lips.

Her cheeks dimpled when she smiled. “Still no idea who I am?”

She collapsed the ladder and tucked it beneath her arm. “The street party starts in a few hours. Will you be here tonight?”

“Wouldn’t miss it.” Especially not if she would be there.

Damn, she was a knockout. But she was young enough to be his… younger sister. Come to think of it, she was probably younger than his little sister, Glenna. “You’re not going to enlighten me, are you?”

“What fun would there be in that?” She started to walk off with the ladder beneath her arm, but stopped and looked over her shoulder. “Just a hint. Ask your brother.”

“Which one? I have three of them.”

“You’ll figure it out.” She smiled and walked away.

For the first time, Honey Jordan was glad her father flaked out and left her to take care of one of his lighting jobs. Not that she was happy Buster Jordan had fallen off the wagon, again, but if her father had been doing his job, she wouldn’t have run into Sean Gallagher.

And she sure as heck wouldn’t have dropped into his arms. Or been held against a very nicely muscled, manly chest. Or been up close and real personal with those beautiful gray-green eyes and perfect lips.

Damn, I didn’t realize Sean was so… smokin’. Not just hot, but smoking, sizzling and whatever the hell other adjective she could think of to add. Maybe she was overreacting. Maybe he wasn’t that good-looking. Maybe she just enjoyed talking to someone about something other than the rodeo for a change.

She called up his face in her mind. Sandy-brown hair, leaning toward blond. Classically handsome, with a perfect, straight nose, a firm chin, and a mouth that smiled, quick and engaging. A mouth she’d bet the race knew how to kiss a woman and rev up her heartbeat in an instant.

Honey halted inches short of ramming the end of the ladder into Tanner McTavish’s stomach. “Oh, Tanner, I’m sorry! I didn’t see you.”

“Or hear me either,” Tanner said. “I said your name three times. Where were you?”

“I was thinking about something.” Someone, more like it. “I didn’t see you when I took Halo out this morning.”

When she was in town Honey boarded her horse, Honey’s Halo or Halo for short, at the McTavish ranch, the Triple T. Honey knew the whole family, including Tucker, Tanner’s twin. Although the twins were a couple of years older than Honey, they’d all gone to school around the same time. Tucker also ran barrels, but she followed the California circuit as opposed to Montana, and she didn’t come home often. As a result, Honey was closer to Tanner.

Tanner was a pretty woman, but not in the least bit flashy. In fact, she downplayed her looks, though Honey wasn’t sure why. She wore her red hair in a braid, didn’t use makeup and had lots of freckles. She was tall, slim and athletic, though she had a pronounced limp from a serious barrel riding accident in her youth. One that had forced her to give up running barrels. She still rode, however, even if she couldn’t compete. Honey had always looked up to Tanner, considering her a mentor as well as a friend. Now Tanner ran the McTavish bull-breeding business.

“I was buried up to my eyeballs in paperwork.” Tanner looked at her watch. “I have a meeting but I can talk for a few minutes. I’m a little early.”

“Just a warning, but there’s a lot of talk about your dad selling the ranch. Have you heard any more? Has your dad said anything to you?” Tanner had been working her butt off to get the bull-breeding business to take off. Lately, all sorts of rumors had been circulating.

Tanner’s face clouded. “No, but I don’t think he’ll tell me until he’s forced to. He hasn’t mentioned it yet, even with all the speculation.” Glancing at the ladder beneath Honey’s arm, she asked, “You’ve been working on the lights. Is everything okay?”

Honey shrugged. “Same old, same old. Every time, I swear it’s the last time I save Buster’s ass, and every time, I give in.” Tanner knew all about Honey’s family issues, especially with her father’s tying one on whenever he knew she would be in town. He figured, correctly, that she wouldn’t leave him to twist in the wind. That was the main reason she stayed away from Marietta as much as possible. Her father’s irresponsible behavior was also the reason her brothers had told him they would no longer come around to take up the slack. With their construction company being located in Billings, and the two of them living there, they weren’t available much even if they’d wanted to be.

“At least this time the job turned out to be interesting. Well, not the job, exactly.”

Tanner arched an eyebrow. “That wouldn’t have anything to do with Sean Gallagher, would it? Dr. Sean Gallagher, the new orthopedist in town? I saw you talking to him just now.”

“Why, yes, it would.” Honey smiled mischievously and added, “I dropped into his arms a little while ago.”

Her friend stared at her a moment. “Dropped into his arms?”

“Yes, literally. I lost the ladder and was hanging onto the roof, about to crash. Sean came along and caught me before I hit the ground.”

“Only you,” Tanner said with a laugh. “You two did look awfully cozy.”

“Yes, and I hope to get even more cozy tonight.”

“I think it’s theatre where you tell someone to break a leg. Considering I’m up for my run tomorrow, let’s go with good luck.”

“Does Sean know about you and Dylan?”

“No. Why would he? That was over years ago.”

“Still, Dylan’s his brother.” When Honey didn’t reply immediately, Tanner just shook her head. “I know that look. What is it you’re not saying? Oh, never mind. I’ll find out later. I’ve got to run or I’ll be late.”

It was simple. Sean didn’t know Honey had dated his brother because he had no idea who she was.

Love Me, Cowgirl is available in the following formats: 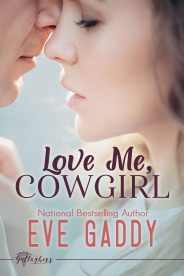 Did you know that Love Me, Cowgirl and many titles are available digitally from Tule's own bookstore? Check it out!