Once upon a time, Mercedes ‘Mercy’ Hernandez had the most enormous crush on her best friend’s older brother, Seb Madison. Now, though, she can’t stand the beast. Forget that he’s as spine-tinglingly gorgeous as ever. He’s a lousy brother and a manipulative bastard, not that she ever thinks about that disastrous one night stand they once had…

Still riddled with guilt over the death of his parents, billionaire loner Seb Madison has spent so long emotionally shut off that when beautiful, fiery Mercy bursts into his life again, he doesn’t know what’s hit him. All he knows is that she confuses him and he doesn’t like it.

Yet their chemistry hasn’t faded and, when hostility turns to attraction, a no-strings affair seems the logical solution. Mercy’s taking a much needed break from her family’s Argentinian vineyard to study for an MBA and Seb doesn’t do relationships. Neither have either the time or inclination for anything other than weekends-only red-hot sex. Or do they…?

Standing at the door to the apartment that occupied much of the top floor of the Madisons’ townhouse, Mercy pulled her shoulders back and blew out a long, steady breath.

She could do this.

She had to do this.

Or she had to at least try.

By all accounts Seb Madison hadn’t changed one bit in the last five years, let alone the last thirteen, but the anger and frustration and hurt she was simmering with on Zelda’s behalf meant that she couldn’t not. She really couldn’t. Not when it sounded as if he’d plumbed new depths of contemptibility earlier.

Ten minutes ago she and her friends, Dawn and Faith, had arrived at what Zel called the Madison Mausoleum where she’d been living in a self-contained apartment on the second floor for a few months now. They’d come to offer Zel their support, because since the crack of dawn this morning the paparazzi had been beseiging her over a story that wasn’t even true.

Mercy, Dawn and Faith had come laden with chocolate, sympathy and a flask filled with virgin mojito. However, they’d been there barely five minutes before details of the horrible confrontation Zel had had with her brother had spilled out.

Apparently, fed up with his emotional neglect of her, she’d challenged him on his lousy behavior towards her over the years and had then followed up with a few home truths, to which he’d responded with typical frostiness and stick-your-head-in-the-sand denial.

Zel was in pieces, clearly devastated that her brother still didn’t want to have anything to do with her, and that had been that as far as Mercy was concerned. Her friend had overcome so many demons to get where she was, but her shattered relationship with her brother was still one of them, and it killed Mercy to see her like this. Especially when it wasn’t Zel’s fault.

So if there was anything she – Mercy – could do to fix things, she’d do it, which was why she was here, at Seb’s door on a mild September Friday evening, burning with a sort of righteous anger and the need to put things right.

One last shot, she told herself, feeling adrenalin begin to flow through her veins as she knocked twice and bellowed, “Seb? Are you in there? Open up.” One last shot.

As long as she remembered that she’d be fine. And she would remember that because this time, unlike the last time she’d tried to make Seb see what was happening to his sister, she was not going to let him distract her. This evening, she’d stay strong, say her long overdue piece, and if she was convincing enough, firm enough, she might even achieve the impossible and actually get through to him. She might make him realize what a shit he was to humanity in general, what a cold, callous cabrón he’d been – and was still being – to Zelda in particular, and persuade him to make amends before it was too late.

And, yes, pigs might fly, but they hadn’t taken off yet, so, as the thud of approaching footsteps reached her ears, Mercy pulled herself together and rallied her thoughts.

Focus, she instructed herself, her pulse picking up and her head buzzing with a sudden flurry of unbidden and unwelcome memories. Do not think about the last time you saw him, the last time you were here. Do not remember the scalding heat of his touch, the dark intensity of his eyes, the feel of his body beneath your hands. Or the spectacular all-night-long sex.

That is not what this is about.

If you have to, remember instead that he took advantage of your pathetic teenage crush on him and used that spectacular all-night-long sex as a weapon to avoid a discussion he did not want to have.

Remember that the following morning you woke up alone, riddled with guilt and self-disgust, and then, burning with mortification and remorse, had to creep out of the house making sure you weren’t seen.

Most of all, though, focus on the misery he’s inflicted on your best friend, because that’s why you’re here.

The steps stopped and Mercy set her jaw. The handle turned and she straightened her spine. So when the door swung open she was more than braced for the sight of him, standing there and filling the space, tall, lean and still so darkly, staggeringly handsome he’d rob her of her wits again if she let him.

But there was no danger of that, she assured herself, sweeping her gaze up and over a chest that appeared to have broadened since she’d last seen him, letting it linger for a moment on the still sexy scar at the corner of his mouth and then looking up into eyes so deep and dark you could drown in them.

She was older. Wiser. No longer a hormonal sixteen-year-old with a crush, nor an impressionable twenty-one year old with good intentions but weak willpower. No. She’d gotten over her ridiculously ill-judged obsession with him years ago. She’d moved so far on she could hardly remember where she’d started. She was now confident, successful, mature.

And above all, immune.

“Hello,” she said, and cleared her throat which had strangely gone all rough.

A shiver rippled down her spine that obviously came from a draft and had nothing to do with the sound of his sexy cut-glass British accent and she blinked because she really hadn’t expected recognition. “You remember me?”

“Of course,” he said, his dark, unfathomable gaze roaming slowly over her. “How are you?”

Taken aback and tingly. That was how she was, now he asked. Getting hotter by the second. Sort of melting inside. Suddenly keenly aware of him and actually feeling a little woozy, because those eyes, that mouth, and his scent… Dios, his scent… It was still woody, still soapy, and still so deliciously intoxicating that she wanted to lean in, press up close and inhale. She wanted to touch him, kiss him, stroke him and lick him and –

What the hell was she thinking? What was she doing? Had she actually started moving?

No. Impossible. She was immune. Immune.

Blinking to clear the fog in her head and swallowing hard to get some moisture into her desperately dry mouth, she pulled herself together and made herself think of the skiing holiday she’d been on last year. Bariloche. August. That had been ass-freezingly mind-numbingly cold. There’d been blizzards. Relentless sub-zero blizzards.

“Fine,” she said, as the heat and the dizziness and the madness dissipated. “I’m fine. You?”

His eyebrows rose. “What happened to making wine?”

“I’m taking a sabbatical.” And she was explaining this why? She wasn’t here for a catch-up or, heaven forbid, a trip down memory lane. She was here for Zel.

“So to what do I owe this pleasure?” said Seb, pulling her back on track.

“Zelda’s having a slumber party.”

His eyebrows rose. “Is she? She didn’t mention it.”

“We – her friends – are throwing it for her. It was a surprise. Are you going to put in an appearance?”

Well, no, technically he wasn’t, but apparently Zel had invited him to dinner, an invitation he’d baldly declined. “She would appreciate it if you did.”

And wasn’t that the understatement of the century? Zel would kill for even a millisecond of her brother’s attention, would have done for years now, and still he withheld it. Deliberately, or simply out of habit, Mercy didn’t know, but either way it had cut far too deep for far too long.

“Given the way our last conversation went,” said Seb dryly, “I very much doubt that.”

Hmm. “You could always apologize.”

“I have nothing to apologize for.”

And Zel did? Mercy felt her indignation spike and then plummet because actually Seb might have a point there. By simply not showing up to that gala at which she was supposed to be representing the Madison family, maybe Zel did have something to apologize for, but still, that was over three weeks ago, and compared with his behavior towards his sister over the years and this evening in particular that misdemeanor was trifling. Trifling. Today’s New Word of the Day, and a good one. “Don’t you think it would be at least polite to come and say hello?”

“I’ve been busy,” said Seb, his jaw tightening a fraction.

“Of course you have.”

His eyes narrowed. “What’s that supposed to mean?”

“From what she’s said, it sounds like you always come up with some excuse to avoid her. Work. Travel. Pencils to sharpen. It’s a wonder she still cares.”

“She does nevertheless. She’s never stopped.”

“My thoughts exactly,” said Mercy a bit hotly. “But you’re all the family she has and apparently lousy family is better than none.”

Seb’s jaw clenched at that, the something in his eyes flickered again, and for the briefest of moments she wondered if she’d pushed him too far. If maybe she’d hurt him. But no. She hadn’t. She couldn’t. No one could. He was like granite: hard, unfeeling and utterly unassailable.

“If my company is so abhorrent,” he said so flatly that she thought she must have imagined the flare of emotion, “then why are you at my door?”

“I’m well aware of that,” said Mercy, determinedly ignoring the memories of exactly how far he’d go to avoid it. “However, this time you have no choice.”

He sighed with what sounded like exasperation. “Oh, go away, Mercedes.”

What? Oh no. Not a chance. She wasn’t going anywhere. So she pulled her shoulders back and tilted her head in challenge. “Are you really so afraid of what I have to say?”

Taming the Beast is currently available in digital format only: 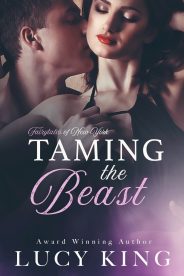 Did you know that Taming the Beast and many titles are available digitally from Tule's own bookstore? Check it out!