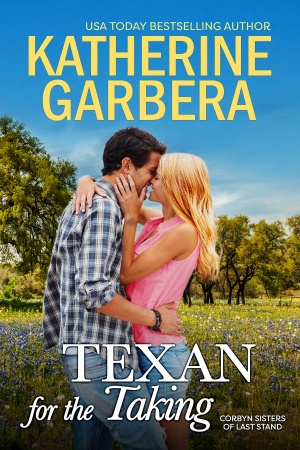 Texan for the Taking

Who turned up the heat?

Classically-trained chef Delilah Corbyn walked away from the cutthroat celebrity kitchen world to return to her hometown of Last Stand, Texas. Delilah’s excited to open her own restaurant where she can finally make decisions without being scrutinized by the media. She thinks she’s living her dream until the new “it” chef saunters into town with a wink and a challenge. Delilah can handle heat in the kitchen, but he stirs up passions she’d long ago buried.

Remy Boucher has come a long way in the culinary world for someone who isn’t formally trained. Now he’s a rising chef with fame and money finally within his grasp. Determined to attract investors, he launches his latest restaurant in Last Stand. But when he meets his local competition, Remy’s plans skew off course. Delilah’s not only as talented as she is beautiful, she’s impossible to fool. Or forget.

Can Remy win her heart with his secret recipe or are they only destined to battle it out in the kitchen?

Order links for Texan for the Taking coming soon!