Rocco De Luca lives and loves in the fast lane. A past Formula 1 champ, he has been jetting around the world arranging celebrity charity races and partying with the world’s elite. Coming home to Isola del Fiori and filling in for his older brother for a few weeks sounds…well, boring. Until he meets Steffi Harlan.

Steffi Harlan is sophisticated, elegant, and way too smart to fall for a tanned chest and a bad-boy smile, or so she thinks, until she’s put in charge of keeping the jet-set playboy out of trouble while he’s gone. Sure, no problem. Except Steffi isn’t immune to Rocco’s charms.

They burn up the nights they spend together, and the last thing Steffi wants is to crash out and end up with a broken heart… Can they both survive love in the fast lane?

Rocco had changed into a pair of trousers and a slim fitting, collared shirt that clung to his muscles. He wore a pair of leather loafers and, as they climbed the winding cobblestone path up toward Empirio Le Bella Figura, he stayed right next to her, cupping his hand under her elbow as they navigated the rocky footpath. Cobblestones were gorgeous to look at and harkened back to the history of their town, but they were killer to maneuver in heels.

As soon as they were on even ground again, he caressed the crease above her elbow before dropping his hand to his side. He pulled his aviator style sunglasses off as they entered the shop, holding the door for her.

“Ciao,” Signora Festa said as they entered. “So nice to see you again, Steffi. And Signor Rocco. When did you get back to the island?”

“Just this morning, Dona. My first thought was to come and see you, but duty calls.”

“Duty? Is that what you are calling women now,” Dona asked with a full-bodied laugh. “How can I help you both today?”

Steffi had no idea what Rocco was looking for specifically in his office. She loved Dona’s shop. It was an eclectic mix of modern Italian housewares and furniture from Milan as well as antiques from the France and the UK. Steffi had purchased her Louis XIV bedroom chair from Dona last winter. She could use a new tray for her vanity and glanced over at Rocco.

“He needs a desk, Dona. Maybe something with a sleek racing design,” she said. “I don’t think they make racecar desks.”

“I wouldn’t expect them to,” he said, giving her a hard look.

She liked needling him. She had the feeling he got away with a little much from everyone.

He turned to Dona with one of his charming smiles. “The stuff in mine is disgusting. A man needs to be comfortable to think,” Rocco said.

“We will find you what you need, Signor Rocco,” Dona said. “I just received a new shipment from L’isle-sur-la-Sorgue, Steffi. There are a few pieces I think you might like.”

“Do you need me?” Steffi asked Rocco.

He shook his head. “I know better than to interfere with a woman intent on shopping.”

Sure he did. He spent a lot of time with women who probably spent his money when he wasn’t in bed with them. Not that any of that mattered to her. She walked carefully away from him and Dona, listening to the two of them chatter on in Italian. She was rattled. The drive from the hotel to town had done that to her.

She wanted to blame it on the speed but she knew it had been the driver. Or rather her reaction to the driver. Why couldn’t she settle Rocco into the same category as Matteo?

She always saw him as some forbidden, decadent little treat sent to tempt her. And to be honest, no matter how much she wanted to be simply her sensible French aristocrat mother’s daughter, she knew she had the irresistible passion of her father running through her veins, too.

Valery had been a man who lived life to its fullest. A bon vivant to his dying day. And there were times when she struggled to control that part of herself. Her father had sent her his rules for living when she’d been about seven. He’d been on the road and when she’d gotten the letter from him she’d expected it to be one of his usual recipes he’d picked up during his travels.

As an adult she read subtext into the letter she’d received and to his rules for living. There were ten of them. She liked order and rules but her father’s rules pushed her toward her own boundaries. She wasn’t sure she wanted the fiery passionate life her father and, to be honest, Rocco seemed to live.

Rule one was easy to follow—Work hard…life will reward you immensely. Rule two—Play hard…you won’t regret it. That one she had a hard time with. A part of her, wanted to play with Rocco.

She knew it was because with Matteo gone she wouldn’t feel guilty about it. She and Rocco were alone and no one else would need to know about it.

Like when Rocco had leaned close to her in the car—Juliet!—and it had been all she could do not to close the gap and kiss him.

Did she even dare try it?

Her phone buzzed and she pulled it from her handbag. She had a text message from her mother.

Chere, I will be in Positano next month, can you meet me for dinner?

You’re not still mad about the sister thing, are you? Her mother asked.

Yes, she was mad. But not at her mother. She and her mom had always been close. And she even understood why Mitzi had never mentioned the illegitimate child of her father. Her mother had been the one to nurture Valery and to ensure his multinational brand after his death. Her mother was the CEO of Harlan Foods. She ensured that Valery’s cooking shows stayed on the air and that his cookbooks were reprinted with forewords written by top up-and-coming young chefs.

Mitzi kept her father’s legacy alive. And part of that legacy was the family image he had. Most of the consumers who purchased her father’s cookbooks were women and the idea of idolizing a man who cheated and had an illegitimate daughter might hurt the brand.

A little. I always wanted a sister. Steffi texted back.

I am sorry. I did the best I could.

She knew that. Her mother only had Steffi’s best interests at heart. I know. I love you.

Steffi snapped a picture of the writing desk she was considering buying and posted it into the text conversation.

Should I buy this?

Yes. I like it. It would look good in that alcove by the bookcases. I love you too. I’ll send more details about my trip next month as I have them.

Steffi put her phone away and continued searching through the store, finding a tiny die-cast car buried in a box of odds and ends. It looked like Rocco’s Juliet. She lifted it out of the box. The toy was in good shape. She spun the wheels of the Alfa Romeo. She set it on the desk and looked at it, in her mind she pictured Rocco standing next to the car.

“Are you almost finished?” Rocco asked, coming up behind her.

“Almost,” she said, turning to block his view of the desk and the car.

He reached around her and lifted the car off the desk. “Looks like Juliet.”

“You were? I guess you want to remember that ride,” he said.

“I try to keep track of all of my near death experiences.”

He shook his head, moving closer until their bodies were almost touching as he set the toy back on the desk behind her.

He put his finger under her chin and tipped her head back. She found herself mesmerized by the intensity of his grey gaze.

She licked her lips, which suddenly felt dry. And he leaned down toward her mouth and she lifted herself a little bit to meet his mouth but he turned his head at the last moment.

“I’ll be happy to provide more excitement in your life, cara,” he said, into her ear and then nipped at her lobe and turned and walked away.

The Billionaire’s Pleasure is available in the following formats: 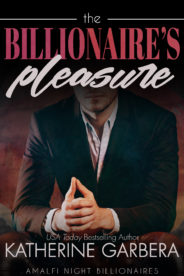 Did you know that The Billionaire’s Pleasure and many titles are available digitally from Tule's own bookstore? Check it out!