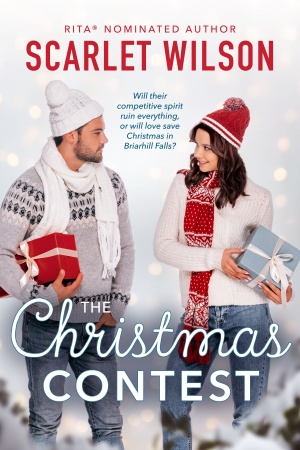 Will their competitive spirits ruin the spirit of Christmas?

When Ben Winters and Lara Cottridge hear that a Vermont radio station is hosting a Christmas contest with a $10,000 prize for a charitable project of the winner’s choice, they seize the challenge. Although strangers, they both are obsessed with all things Christmas and each has their own worthy pet project in mind.

News of the contest creates a lot of buzz, but most participants fall at the first hurdle – a timed online quirky Christmas quiz. The second, a stressful on-air quiz whittles the field down to two – Briarhill Falls residents Lara and Ben who are surprised that they have never met.

As the contest heats up with five further Christmas-themed challenges, the town and state become enthralled by the battle of wits and skill. Soon Lara and Ben realize they have far more in common than a love of Christmas. And far more at stake. Will their competition stand in the way of falling in love?

Well hi folks and welcome to KNWZ, and guess what? It’s getting to be that time again. You know? Christmas time! We love Christmas time at KNWZ and we’ve got something very special this year to help you all celebrate the season of goodwill. Find your favorite Secret Santa, your most intelligent Mrs. Claus, your brightest Christmas fairy, or your most Christmas-crazy work colleague, because…you’re going to need them! This year we’re hosting a special Christmas quiz, the winner of which will win ten thousand dollars for the charitable organization of their choice, just in time for Christmas! So, roll out your Christmas cracker. Register online to take part in our first stage Christmas quiz. But don’t be fooled, it’s not for the faint of heart. Our online quiz will sort out the Grinches from the True Elves and will leave us with ten quarterfinalists. After that, live on air, we’ll host our own quiz to find our two semifinalists. They’ll be in a fortnight-long battle with seasonal challenges to find our biggest Christmas know-it-all. Someone will win ten thousand dollars for their favorite organization. Could it be you? Register now and spread some of the Christmas love and may the best Christmas nut win!

The radio announcer cut to the latest version of Jingle-Bell Rock as Lara Cottridge came back through to the office with a plate of Christmas cookies. They were her brand-new recipe, perfected in the early hours of this morning. She slid them onto the desk as her colleagues gathered around, hands swiping cookies as they spoke.

“Does anyone know as many useless Christmas facts as you?”

“They’re not useless.” Lara took a swipe at the hand whose owner had flung the last insult before she picked up a cookie for herself. “Hmm,” she said, nibbling at the edge. “Maybe a little more nutmeg?”

She settled in her chair. “What do you all think?”

Her five coworkers leaned on the edge of her cubicle. “We think you should enter that contest,” Abby said.

Rae made a strangulated sound. “The one that is built entirely for you.”

Lara looked at the faces staring at her. She held up the cookie again. “Cinnamon?” she queried.

All five let out a collective sigh. “Lara!”

“What?” She laughed now. “I have no idea what any of you are talking about.”

Abby shook her head, pulling up a chair alongside her. “Didn’t you listen? The announcer was practically crying out your name.”

Lara frowned. “What can I say? I was distracted. Have any of you looked outside?” She stood up and pulled back the window blinds to open them. Briarhill Falls was covered in another thick layer of snow. From the admin office in the hospital, they had a clear view of the main street in Briarhill Falls. The array of shops with multicolored awnings, now coated in snow; the three-tiered frozen water fountain in the town square; waves of mist hanging over the Christmas tree lot at the far end of the street with a few green treetops floating above the surface, giving them the illusion of hovering in midair. Just one look was enough to send tingles across Lara’s skin. The people wrapped up in their best winter wear—splashes of bright red, blue, and green against the white snow—bustled about their business. If she could breathe in the outside air from here, she swore she could smell fresh fir scent mixed with gingerbread, berries, and cinnamon. She smiled at the cookie in her hand.

Abby rolled her eyes. “What? More snow.” Slapping her hand to her chest, she collapsed into her nearby chair. “Well, strike me down—it’s Vermont. In winter. What a surprise.”

Rae tugged at the sleeve of Lara’s red shirt. “Didn’t you say your grandmother’s retirement home needs their gardens redone?”

Lara sat a little straighter. “Well, yeah. The last guy bailed on his contract. He even took all the money with him—probably to Hawaii—and they haven’t had the funds to take on someone new.”

It was almost like the rest of the women realized this was the best way to rope Lara in. “Wouldn’t you like it if your grandmother’s retirement home could have the giant tree in its courtyard like it normally does?” Rae asked.

Lara frowned. “Of course I would.” She sat the cookie down, “What are you all talking about?”

Rae slipped her arm through Lara’s. “It seems your little goldmine brain full of useless Christmas facts could actually come in handy. Our favorite radio station just announced they’ll be offering ten thousand dollars for whomever wins their Christmas quiz. All you have to do is register online.”

Lara pulled back a little. “Ten thousand for winning a Christmas quiz?” That was a lot of money.

Abby nodded. “Yeah. It was just on the radio. Register online, answer the preliminary questions, then do a few other things. All to win ten grand, which will be awarded to your favorite organization.”

“You’ll ace it,” Rae said quickly. “No one knows Christmas like you do.”

“This sounds too good to be true. It can’t be that simple.”

Abby gestured toward the radio. “KNWZ says it is. Why don’t you apply at lunchtime?”

Lara swallowed, wishing she’d made coffee to go along with the cookies. Ten thousand dollars? Her grandmother’s place could really do with the money. Ever since the contractor had run off with the gardening fund, the outside of the facility had become a little neglected. When the residents had been informed there was no budget for decorating the central courtyard this year, she’d sensed the despondency in the air. The courtyard usually displayed a giant real Christmas fir, decorated in whatever shades the residents had picked that year. The thought of it not being there had made Lara’s stomach sink. And it wasn’t just the residents who were sad about it—the staff were, too. The outdoor space played such a large part in the holiday celebration. A candlelight Christmas service had been held in the courtyard every year since her grandmother had moved in. This year, the plans had understandably changed.

“I’ll think about it,” she said as she turned back to her computer.

How hard could a Christmas contest be? For as long as Lara could remember, she’d adored everything about Christmas. Useless Christmas facts were her one vice.

But she didn’t want to do the contest in full view of everyone in the office. Nerves might get the better of her. Tonight. She’d do it when she got home. Closing her eyes for a second, she pictured the faces of the residents if they could get their beloved Christmas fir this year. Excitement already buzzed through Lara. This might even be fun!

The radio played in the background as the kids practiced. “Hey, Mr. Winter. How about you do that?”

Ben looked up from where he was helping some of the younger kids shoot baskets. The gym hall was packed. When he volunteered, he always managed to have a good turnout for the afterschool program. It helped he was an ex-baseball player. He’d been picked up by one the major league teams while in college, but then crashed out due to injury before quite hitting the big time. So near, yet so far.

This time of year, there was no baseball in Vermont. He’d spent the last few years volunteering and coaching all sports here after school. He’d coached football, netball, hockey, basketball, and, of course, some baseball. Just enough that it didn’t make his old injury ache too much. He believed there was a sport out there for every kid. And he was happy to help them find something they loved.

Last year, he’d taken a group of kids orienteering. Others had attended a rock-climbing facility. He’d helped some of the senior girls set up spin classes. Even the kids who decided they’d hated all sports would join in for a game of dodgeball. He’d even made some inquiries about a yoga instructor teaching a class in the program. Anything to help the kids increase their endorphins and their feel-good factor.

Ben looked up just in time to see a basketball flying at him. He jumped up and caught it, landing with a thud on the floor. The shockwave reverberated through him, and he glanced down. The gymnasium floor badly needed to be replaced. Partly due to him, this place was used constantly. Parts of the floor were worn, patchy in places, with cracks starting to appear. At some point, a health and safety assessment would likely say it couldn’t be used anymore and the school district definitely wasn’t getting rich soon, which meant no budget for a new floor.

He tuned to what the kids had just said, strode over to the office and listened to the announcer on the radio.

Ten thousand dollars just to answer questions about Christmas? It was the family joke that there wasn’t a thing about Christmas that Ben didn’t know. Some people collected baseball cards or lunch boxes. As a kid, Ben had collected weird and wonderful Christmas facts. It had helped him on many a trivia night in one of the local neighborhood bars. But now? If he closed his eyes right now, he could imagine this place with a brand-new, sprung floor that would work wonders for the basketball matches and gymnastics taking place in the school. Would a school be considered an organization worthy of the prize? One phone call would let him know.

Several of the kids crowded into the office with him.

“You can name all the reindeers in under ten seconds!”

He shuffled some papers on the desk, as he was watched by what seemed like a dozen sets of hopeful eyes. He held up one hand. “Let me think about it, guys. I’ll let you know.”

Shooing them out of the office, he followed and started a new game of dodgeball. But his brain was in another place. He’d been here as a volunteer coach for the last five years—after his baseball career had bombed because of his injury. He’d left Los Angeles to return home to Briarhill Falls, bought his woodshop, and after some persuasion from a local kid, had decided to drop in at his old high school to see if he could help in any way. They’d welcomed him with open arms.

As he watched the kids laughing and playing, he felt his heart swell. He could do this. He could. He’d win them a brand-new gym floor for Christmas.

The Christmas Contest is available in the following formats: 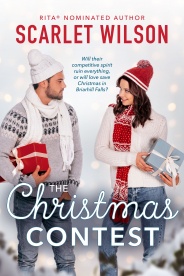 Did you know that The Christmas Contest and many titles are available digitally from Tule's own bookstore? Check it out!