Christmas for the Deputy

Will he face his past or run from his future?

Ethan Thompson has been a part of the Martin family since he was a troubled teen and Susannah Martin saved him. He’s always done everything in his power to help the Martins, especially oldest daughter Penelope. But he’s always made sure to keep himself just separate enough to safeguard his heart against the straight-talking beauty.

Pen Martin-Wakefield moved home to Last Stand, Texas, with her three girls hoping it would give them all a fresh start after her husband’s tragic death. She’s ready to move on, and as she deals with the stresses of a holiday season and a broken arm, she realizes Ethan is always the one she’s leaned on.

Ethan’s determined to resist Pen and her girls. He’s got too many secrets and scars to be any good for them, but as a Christmas in Last Stand works its magic, Ethan begins to find out just how tenacious Pen is and how lonely his heart has been.

It was entirely possible Penelope Wakefield’s greatest secret was that she absolutely despised the holiday season. She hated the lights and the songs and the shopping. She hated that, along with all the extra work she was expected to do in the kitchen, she was supposed to let her daughters help—which only ever made things twice as difficult, messy, and time-consuming. Everything was a chaotic mess, and Pen hated chaos.

But as she woke up the day after Thanksgiving—far too late since she’d been up half the night feeling old and sad and nostalgic and happy and hopeful and old after the announcement of her little sister’s engagement—she was ready to grin and bear said secret.

She would spend the next six weeks singing Christmas carols, decorating the tree and cookies with her girls, with a big smile on her face. Because she wanted desperately for her girls to grow up loving Christmas and thinking it was magic.

Even if that magic had died for Pen the first Christmas without her mother. But just like then, Pen pretended. So no one would ever know her good cheer was a lie.

That was just the way Pen liked it.

Besides, she had to have some hope that her first Christmas living at home in almost twelve years would bring some magic for her girls.

It seemed a bit too much to ask for.

Somehow, despite losing her mother so early, and then losing her husband three years ago when he’d been shot in the line of duty, she managed to look on the bright side of things most of the time. It helped her cope and it helped her feel in control.

But creepy Santa faces seriously, seriously tested that control. No doubt his chubby cheeks and lascivious grin would soon be making the rounds.

Pen allowed herself exactly sixty seconds to groan, wallow, and bemoan her lot in life, before she got out of bed. Despite the late hour, she followed her usual morning routine. Make bed, get dressed, check on the girls’ rooms to see if they were awake and if they’d made their beds.

She found none of her three girls, and three very, very unmade beds.

Frowning, Pen headed for the kitchen, determined to have her first cup of coffee before she started scolding.

But the minute she walked into the kitchen, she noticed the coffeepot was empty and breakfast dishes had been left dirty and scattered about.

Today was so not her day.

She moved to start making another pot when the back door swung open and Ethan marched inside, little Daisy in his arms.

Pen dropped everything she’d been holding and rushed toward her youngest daughter. “What is it?”

Pen met Ethan’s gaze, which was humorous rather than concerned. Thank God.

He settled her onto a chair. “We had a bit of a fall and Daisy scraped her knee. I told her I’d get her all bandaged up.”

“I want Ethan to do it,” Daisy said between sniffling cries, clinging to Ethan with a death grip.

Pen frowned at her youngest, who was still crying but looking up at Ethan adoringly through her tears. Daisy was usually wary of strangers, though Ethan was hardly a stranger. Pen’s mother had taken him in when Pen herself had been twelve. But Pen had moved to San Antonio with her husband at the age of eighteen, which meant her daughters only knew the three boys Mom and Dad had mentored from visits home to Last Stand. The visits had always been frequent, though, and Ethan was Uncle Ethan to her daughters.

Pen considered Colt, Ethan, and Bracken her daughters’ uncles, and she knew they did too, but Pen was surprised by how easily Daisy had taken to Ethan in the six months since they’d moved to Last Stand.

“I’ll do it,” Ethan said, giving Daisy’s head a little pat. “Better let the first responder expert handle it.” He gave Pen a wink and then went about making a very big deal out of Daisy’s very small scratch.

“Now, look how brave you are,” he said when the princess bandage was attached to her knee.

Daisy sniffled delicately. “Aren’t you going to kiss it?”

Pen watched as Ethan tried to bite back a smile so he looked grave and like he was taking the delicate task of pressing a gentle kiss to her knee very seriously. “There now. Good as new.”

“Can I go back and listen to Grandpa’s story?” Daisy asked, sliding off the chair. Any trace of tears was gone.

“Yes, but once I’ve had my coffee all three of you girls are going to make your beds.”

Daisy groaned, but she exited the kitchen and out the back door to where Fritz Martin was regaling his granddaughters with tales of who knew what. Pen watched him out the window as he gestured broadly. Her girls—even Addie, the sulky oldest—were giggling and taking great delight in whatever he was saying.

It was good to be home. Pen might not have ever wanted to be involved with the goat farm side of things, but she liked that her girls had chores to do, animals to love. It was good to give her girls their gregarious grandfather on a regular basis. If she reminded herself of that she might come to believe Addie would eventually forgive her for moving them here.

On a sigh, she turned from the window and smiled at Ethan. He was dressed in jeans and a long-sleeved T-shirt, his hair cropped short. When they’d been teenagers, she and her friends had sighed over how cute Ethan was. It wasn’t the right word anymore. His face was too chiseled, his demeanor too serious. He reminded her of a cowboy in an old black-and-white movie. He just looked noble and serious.

“I don’t know how you’re still single.” She went about preparing the coffee machine. “Good job, good-looking, good with kids. If you wait too long to get on that, Daisy will be old enough to make a pass at you before you know it.” She grinned over her shoulder at him.

“Maybe that’s what I’m waiting for. The chance to be an old pervert.”

She swatted his arm and waited impatiently for her coffee to brew. She glanced out the window over the sink to where her father was still telling stories. Meanwhile Colt and Sadie were walking back toward their side of the property.

Pen sighed. She missed the days of having someone to hold hands with. She liked to think she’d come to grips with Henry’s death, with the fact she’d always miss him. And she supposed she had because truth be told she was ready for that again, even if it wasn’t with the man she’d married—thinking they’d be together forever.

The death in ‘till death do you part’ had come too soon for Henry, and Pen could do nothing but accept that she’d had a good man for too short a time. He’d given her three wonderful daughters.

And now her prickly little sister was getting married. Married. To Colt Vance, one of Mom and Dad’s strays. One of the Bad Boys of Last Stand. Which didn’t suit Colt now, and had never suited the man in the kitchen with her.

“I gave Sadie a hard time when she first told me.” Pen thought uncomfortably to the lecture she’d given her sister about not complicating a delicate relationship. Pen had been wrong, and it ate at her a bit how much so. “I didn’t think she knew what she was doing, but I guess she did.”

“I guess she did. You don’t sound…happy.”

Pen shook her head. “I am happy for them. Totally. But, you know, it makes me a little…sad for me. I guess it makes me disloyal, but I can’t picture myself like Dad. I don’t really want to raise my girls alone. Oh, alone isn’t the right word. I have so much help now that we’re home, but I… Well, I’m not opposed to getting married again. I miss that kind of partnership.”

“Why exactly are you saying it to me?”

She waved it away, and smiled over at steady, stoic Ethan. “You’re easy to talk to. You know that. I bet you know half the town’s secrets.”

He only shrugged, but she knew she was right. She also knew, no matter how much anyone else thought Ethan Thompson was a simple, good man, he had secrets of his own.

“I don’t suppose you know anyone around my age, good with kids, good-looking.” She was teasing him, because he so often missed any and all teasing and that always made her laugh.

She shook her head and rolled her eyes. Always so clueless was their Ethan. And maybe it was the lack of coffee, or the lack of sleep, but she decided to push it a step further. “You know, I used to have a crush on you.”

She fisted her hands on her hips in shock and mock outrage. Mostly mock anyway. “Well, now, you’ve ruined my whole belief that I was subtle about it.”

He didn’t so much as smile. “Susannah told me.”

The mention of her mother deflated Pen’s good humor. “She told you I had a crush on you?”

Something about the way he was so serious about it gave her an odd sense of foreboding. “I thought Dad was the one who warned you three boys off of us girls.” She turned to the coffee and poured, not wanting to look at his stoic expression anymore.

“Oh, so I was just that repugnant to you?” She gave him an arch look, but he didn’t wither or try to backtrack. He merely shrugged.

“If that’s what you want to call it.” He stood. “Well, I told Colt I’d help him get ready for the cattle. See you at dinner.”

With that, he left her more than a little offended.

Christmas for the Deputy is available in the following formats: 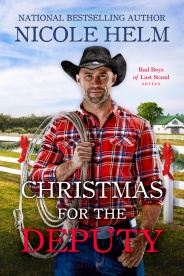 Did you know that Christmas for the Deputy and many titles are available digitally from Tule's own bookstore? Check it out!