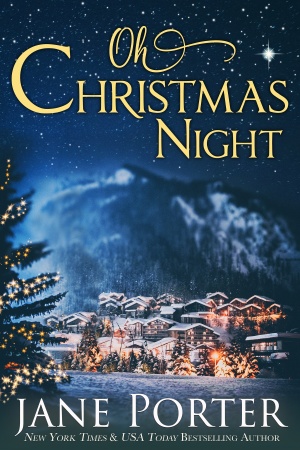 Brilliant, but overworked California accountant, Rachel Mills, inherits an old bookstore in Marietta, Montana, just as she’s been passed over for a huge promotion. The smart thing to do would be to buckle down and keep on working. But for the first time in her life, she goes with impulsive and books a flight to Montana to inspect the bookstore, and hopefully have her first white Christmas ever.

Texan lawyer and entrepreneur, Atticus Bowen, has found the perfect location for his next restaurant—the two-story, turn-of-the-century brick building on Marietta’s Main Street. All he has to do is convince the new owner to sell Paradise Books to him. After all, used bookstores aren’t practical or viable businesses, and he’s making Rachel Mills a very generous offer. But instead of jumping on his offer, Rachel decides she’s going to open the bookstore doors for December and ‘explore her options.’

The last thing Rachel expected was to fall in love with the old bookstore, or charming Marietta. She never expected sparks to fly with handsome, arrogant Atticus Bowen, either. Smart, practical Rachel realizes she just might be falling in love with the sexy, opinionated Texan lawyer — something that could prove to be neither smart, nor practical….or the best decision of her life.

Rachel Mills felt positively ill. She sat down at her desk, and covered her face with her hands, struggling to breathe.

She didn’t get the promotion.

She’d been passed over, again.

Her throat thickened and her eyes burned, hot and gritty. It didn’t make sense. No one in her department had more experience, or a better work ethic, than she did. No one at Novak & Bartley put in more hours, or handled more, clients than she did.

How could they promote Jay Shields over her? He’d been hired three years after her. He used up every bit of his vacation time each year, every year, and then some. He frequently made mistakes requiring her to go in and clean up after him. She routinely solved problems he couldn’t. So why reward him?

Rachel didn’t want to believe it was because Jay was a man. She really, truly didn’t want to go there… but every person promoted these past few years had been a man. Plenty of women worked at Novak & Bartley, but most in support positions. She’d known this going in, too, but she’d viewed the lack of female leadership as an opportunity to prove herself.

She’d gone over and above, time and again. She’d brought in new clients, increased the firm’s revenue, and had saved important accounts that were unhappy and wanted to go.

She’d done the research and crunched the numbers, and knew what was required to be promoted, too. She understood that one couldn’t ask for, or expect, more responsibility if one wasn’t adding sufficient value, which was why she was handling big accounts, and big money, and she didn’t make mistakes.

So why was she not recognized?

Rachel squeezed her eyes closed, air bottling in her lungs. She was hurt, but even more so, she was angry. The first oversight had been disappointing, but to be passed over three times? To be given flimsy excuses by upper management?

She wasn’t a child. She didn’t appreciate being patronized. But, really, she had no one else to blame. She’d known during the interview process eight years ago that she’d be one of the only female accountants at the firm, but it hadn’t worried her. She’d naively thought she’d be able to prove to them they’d hired the right person, and she’d demonstrate competency and excellence and she’d be the first of many women to work for Novak & Bartley.

But that hadn’t been the case.

Yes, a few female accountants had been hired after her, but none of them had been given a chance for advancement. None of them were invited to participate in Novak & Bartley’s annual golf tournament or the other VIP client events, either. It was as if they’d all hit a glass ceiling—and in this case, the ceiling was very, very low.

A light knock sounded on her door and Rachel lifted her head to see Alicia, one of the young women that worked in administration, standing in the doorway with a bright yellow package.

“I knew you’d be here,” Alicia said confidently. “Lots of the others have already left for Thanksgiving.”

“Thanksgiving isn’t for another two days,” Rachel answered, sitting taller, squaring her shoulders. “What are your plans for the holiday? Going anywhere?”

“Heading to Santa Barbara. My boyfriend’s family is there.”

Rachel gestured to the boxes stacked in the corner. “Probably here, preparing for the SynTan audit.”

“That’s not for months.”

“Early January, but it’s better to be prepared.”

“You’re the queen of prepared,” Alicia said, smiling as she handed the package over. “This just arrived. It’s from Australia. Do we have clients in Australia?”

“I don’t,” Rachel answered, straightening. “Not sure about the firm.”

Alicia disappeared and Rachel turned the thick, padded DHL envelope over to read the address label. It had been sent from Lesley Hart, Rachel’s godmother, a godmother Rachel had only met a couple of times in her life, the last time being at Rachel’s mother’s funeral twelve years ago. Rachel had been a senior in high school and the funeral had been a blur of tears and hugs, as well as her father’s stoic silence, and after it was all over, she just wanted to put it behind her. She wanted to forget the pain and grief and she buried herself in her studies, because the one thing in life that didn’t let her down was numbers. Numbers never failed, and numbers never lied. Little wonder she chose accounting as her college major.

Uncertain as to what this mythical godmother had sent her, Rachel opened the envelope and drew out another envelope, this one bumpy with a letter, a folder of papers, and a key on a small key ring with a painted decorative accent that read “Big Sky.”

Frowning, Rachel held the key ring for a moment, the key pressed to her palm. Years ago her mother talked about being from Big Sky country, but Rachel had only been there once, and she was so young at the time that she didn’t remember it. Setting the key aside, she read the brief letter, and then read it again, more baffled with every reading.

It seemed that her godmother, the one she’d only met a handful of times, was gifting her a bookstore. In Montana. In the town where Rachel’s mother had grown up.

Perplexed, she read the letter a third time.

I apologize for missing your 30th birthday last month, but hope it was happy. I thought of you on your special day, and I thought of your mother, too, and how proud she’d be of you. I’m sorry I haven’t been a better godmother but please know I carry you and your mother in my heart.

To celebrate your 30th birthday, and your impressive accomplishments, I am giving you Paradise Books, my bookstore in Marietta. I can’t imagine anyone more deserving. May it bring you the joy it brought me.

With all my love,

Rachel blinked hard, the sudden rise of emotion catching her off guard, not just by the gift, but by the mention of her mother. No one mentioned her mother anymore. Dad certainly didn’t discuss her, and Rachel didn’t think of her, either, finding the memories too painful.

Rachel folded the letter, hiding the words and the emotion, and reached for the paperwork. There was a great deal of paperwork, too, as the gifting of a business, even a small business, wasn’t a small thing. The government didn’t just let one “gift” a business. There were taxes and paperwork, and more taxes, things Rachel knew well as a corporate tax specialist.

The paperwork included a description of the business—a historic red brick building which included an apartment carved from the attic rafters, allowing the owner to both live and work on the historic premises—along with the most recent tax returns on the building which indicated that the store hadn’t been open in several years.

Lesley shared in a handwritten note that the turn of the century brick building was paid for, and the property taxes had been taken care of for the next year, but she was aware that Rachel would incur some taxes with the gift and she hoped that the taxes wouldn’t be an undue burden. There was value in the store, but to be honest, most of the value was in the building itself, and Lesley suggested Rachel visit Marietta and see the store for herself. In fact, Lesley added, if she had time, she should go soon since Christmas was one of the nicest times of years in Marietta.

Exasperated, Rachel pushed the paperwork away, and turned in her chair to glance out the office window with its view of the 405 freeway and the tall Ferris wheel at Irvine Spectrum.

What was she supposed to do with a bookstore in Montana? Rachel’s entire world was here. She’d been born and raised in Irvine, attending UC Irvine where she’d studied accounting, and Irvine was where she lived now, just seven miles from Novak & Bartley’s main office. How did one just pop into Marietta for a visit? It wasn’t close. It wasn’t convenient. And this wasn’t a gift Rachel could use.

Weren’t fairy godmothers supposed to show up when you needed them? Weren’t they supposed to swoop in and make things better?

Rachel turned from the window, her gaze sweeping in her office with the towering pile of files, and boxes of documents stacked in the corners, and it struck her quite forcefully that she’d sacrificed almost everything for this company and suddenly she wasn’t sure the sacrifices had been worth it. She’d let go of relationships and friendships for longer work hours, and how had it mattered? She wasn’t getting anywhere. And even if she stayed with Novak & Bartley, it was unlikely she’d ever make partner.

Exhaling hard, she reached for the keychain with the Big Sky accent, and turned it over, the worn brass smooth against her skin. She couldn’t remember when she’d felt so devastated.

She’d poured herself into her job. She’d sacrificed virtually everything for work. There had been a plan, and it had looked so neat and tidy on paper. X number of clients times Y number of years and she’d be a manager, and then a director, and eventually a partner. Only it wasn’t working out that way. Her numbers were letting her down—no, Rachel stopped herself, that wasn’t true. It wasn’t the numbers that let her down. It was people.

So, what was she going to do? Go somewhere else, do something else, or just put her head down and work harder? Rachel didn’t know. She couldn’t think. She couldn’t get perspective.

She craved air, and space, and a chance to relax. Breathe.

Maybe a visit to this old bookstore in the middle of nowhere was exactly what she needed.

Oh, Christmas Night is available in the following formats: 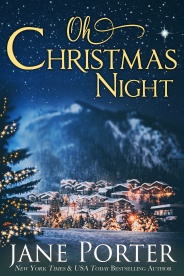 Did you know that Oh, Christmas Night and many titles are available digitally from Tule's own bookstore? Check it out!