Can the power of her love heal his wounded heart?

Jade Mitchell’s life changes forever when a concussion activates “the gift”—a psychic ability passed down from her grandmother. As a massage therapist with a thriving practice, Jade needs to protect her professional reputation in her small Texas town. She’s wary of her new talent, but also wants to use it to help her friends and neighbors.

Cash Burleson, a no-nonsense former bull rider, now runs his family’s successful cattle ranch. With no children of his own, Cash treasures his young nephew, AJ, who is battling serious kidney disease. But when Jade’s massage services are prescribed, Cash is leery. He’s used to being guided by facts and logic, not lavender and meditation music.

As Jade and Cash are drawn closer, the search heats up for a kidney donor. Jade knows she needs to use her gift to save AJ, but she risks outing her secret in the process. Will she lose Cash’s trust, or can she count on him to see what’s truly in her heart?

Jade Mitchell locked her front door and started down the sidewalk toward Main Street, the early April sun like a warm cloak around her shoulders. Today she was heading for Minna Herdmann’s birthday bash, an annual celebration honoring the oldest resident of Last Stand, Texas.

She patted her jacket pocket, double-checking for the stack of business cards she always carried. The downtown district around The Carriage House restaurant would no doubt be packed with well-wishers, shoppers, and tourists. Today would offer the perfect opportunity to meet prospective clients and pass out a few cards. August Wolf’s new tasting room, Verflucht, might be open by now as well. If it was, maybe she’d stop in and try a glass of his wine after she spent a few minutes with the birthday girl.

Five years earlier, when Jade had first opened the doors of Firewheel Bodyworks, Minna had been one of her first clients, and the white-haired woman still came to the studio every other week for her massage, regular as clockwork. In fact, she jokingly gave Jade’s skills all the credit for the fact that she was celebrating her 102nd birthday today.

At the Corbyn house, an imposing Victorian mansion surrounded by well-tended gardens, Jade stopped for a moment to admire the riot of color spilling from a concrete planter next to the sidewalk. Bluebonnets and coreopsis and firewheels nodded in the breeze, and the low drone of honeybees filled the air. Jade bent and stuck her nose in the middle of one of the brightly colored wildflowers, drawing in the sweet-and-spicy fragrance. How thoughtful of the Corbyns to choose native Texas blooms for their yard. Her own front door was flanked with big pots of firewheels too.

She straightened and turned back toward the business district. Aside from Minna’s birthday, there was a lot to celebrate this morning, starting with the beautiful spring day. Add to that the bustle of activity she could see ahead on Main Street, the bright festoons of banners and balloons decorating the limestone storefronts, and Minna herself occupying the seat of honor on the patio of The Carriage House. Jade could make out a wide tarp shading the elderly woman’s chair and a short line of townsfolk waiting to get their chance to speak with her. Jade headed in that direction.

One moment she was passing by the Char-Pie bakery, trying not to drool over the smell of warm pastry and fresh peaches, and the next moment, all hell broke loose. From off to her right, a pickup truck barreled into the busy intersection, its tires screeching. In a scene worthy of a Bruce Willis action movie, the truck slammed into the side of a small tour bus, bulldozing it into the front window of the Verflucht tasting room. Not twenty yards in front of her, a bright shower of glass erupted from the damaged storefront, raining down on the sidewalk like diamonds, making her duck and cover her head. When she looked up again, the pickup was careening wildly down the street, heading straight for the statue of Asa Fuhrmann, the town’s founder. The vehicle came to a stop a few yards short, rolling onto its side.

Jade stood frozen for several seconds. Then the first screams from inside the tour bus reached her ears. People were hurt! She began running toward the bus, her heart hammering. With her training and knowledge of human anatomy, there might be some way she could help. From the corner of her eye, she was relieved to see Dr. Graham McBride sprinting toward the bus too. In fact, at least a dozen people were rushing forward to help. Others stood gaping, watching in horror, or ran in the opposite direction.

In the next second, a deafening explosion ripped the air as the pickup truck burst into flames. Jade gasped, coming to an abrupt halt once again, as tongues of hungry fire engulfed the truck’s cab. A wave of nausea curled through her belly. How could anyone possibly survive that raging inferno?

She turned back toward the bus, fighting to keep her focus on doing what she could to assist. A woman’s terrified voice called out again for help. People surged and eddied around her in a chaotic swarm.

And then someone plowed into her from behind, knocking her to the ground.

The small boy—maybe seven years old—gave her a big grin, showing off several missing teeth. He took a step forward and swept the kid-sized Resistol off his head, leaving his blond hair sticking up like unruly straw. “Yes, ma’am. Me, please.”

She grinned back. How cute is this guy with his charming lisp?

“Great, cowboy. Hop on up here.” She patted the leather seat of her portable massage chair. “This is my faithful horse, Silver.”

The boy giggled, and the two adults turned to each other and smiled. The woman opened her purse. “Five dollars, right?”

“Just three for the little ones.” She took the woman’s money and returned her change. “Okay, partner, why don’t you give your hat to your mom and we’ll get Silver adjusted just for you.” She loosened the master bolt and lowered the face cradle as far as it would go, then covered the cushion with a fresh paper towel. “Go ahead and put your face down in this hole,” she told him. Even at the shortest adjustment, it was still a bit of a stretch for the boy, but she could make it work. She showed him where to put his hands and knees on the padded rests.

“Ready?” she asked, and chuckled as he gave her an enthusiastic thumbs-up.

Placing her hands on his upper back, she began gently kneading his left shoulder, working her way across toward his spine. He giggled again but didn’t move, and Jade could feel his little body begin to relax under her touch.

As she settled into the familiar rhythm of the seated-massage routine, she allowed her thoughts to shift to the two adults who stood off to one side of the chair, observing. The boy’s mother looked frazzled and tired, her auburn hair escaping its clip in wild wisps. Probably the family had spent the whole day here at the Bluebonnet Festival. She could only imagine the energy it must take to ride herd on a seven-year-old in a busy and crowded place like this.

The man with them, the boy’s father Jade presumed, seemed rather withdrawn. But as she allowed herself to glance over at him again, his gaze met hers directly from under the shadowed brim of his hat. There was frank interest and an intensity in his expression that hadn’t been there moments before. Quickly, she looked away. A wave of heat washed upward to her cheeks. It was so unprofessional to be caught ogling a young client’s father, especially with the mother standing right next to him.

But who could blame her? The man was drop-dead gorgeous in his snug Wranglers and dusty boots, the blue plaid of his shirt perfectly complementing his sky-colored eyes. And he had to be well over six feet, which was always a plus in Jade’s book; she herself was five feet ten. There was no harm in admiring a handsome cowboy, was there? Even if he did belong to someone else? It’s not like she’d ever dream of acting on an attraction to a married man.

She turned her full attention back to her pint-sized client and began a set of gentle compressions up and down his little spine.

And that’s when it happened.

A strange rippling sensation started where her fingers touched the boy’s shirt and crawled up her arms and shoulders. It spread up the back of her neck and over her scalp like a swarm of tiny, dancing beetles.

Yikes! She snatched her hands away. Taking a step back, she suppressed an involuntary shudder as she fought to regain her composure.

What the hell? She’d never felt anything like that before.

Maybe she was just tired. It had been a very long day and she hadn’t taken many breaks. Maybe she’d overworked her back muscles and was having some kind of spasm. She shook out her hands and arms.

After a moment, the sensation eased. Relieved, Jade gave the boy’s mother a quick smile before gingerly placing her hands on his back once again. She waited, counted to ten. No dancing beetles. Thank God.

Turner McBride, the neurologist who’d treated her in the ER last weekend, had told her she’d suffered an uncomplicated, minor concussion when her head hit the sidewalk the day of the bus accident. Headaches might be expected for a few days, yes, but he hadn’t mentioned anything about creepy-feeling muscle spasms in her arms.

As Jade began to move her hands over the boy’s shoulders, her mind was suddenly flooded with a jumble of images. They had a blurry, almost-misty quality to them, like old, faded photographs. She saw a house—a large, rambling ranch house at the end of a dirt road—and then the image shifted to show an orchard of some kind and a black-and-white border collie romping through tall grass.

Dr. McBride certainly hadn’t talked to her about anything like this.

Again, what the hell? Where were these pictures coming from? She lifted her hands again, and her mind gradually cleared, bringing her back to the familiar bright bustle of the festival. But when she laid her palms back on the boy’s shoulders, the images returned. This time, she clearly saw a hospital bed. In the bed was a small figure covered with a white sheet up to his chin.

It took every ounce of Jade’s courage to keep her hands on the little cowboy. To move her palms slowly and carefully down his back. She didn’t really know what she was looking for, since nothing like this had ever happened to her before. But when she reached his lower back, and the area over his kidneys began to glow a harsh red color, she finally understood what was taking place.

The gift had apparently been activated. Somehow.

Whether she wanted it or not.

The Cowboy Comes Undone is available in the following formats: 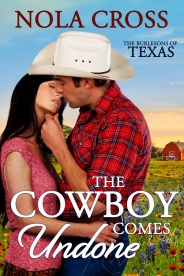 Did you know that The Cowboy Comes Undone and many titles are available digitally from Tule's own bookstore? Check it out!