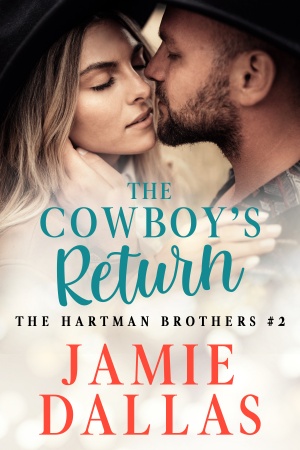 Once a cowboy, always a cowboy.

Colton Hartman hung up his spurs at eighteen vowing never to return home. Years later, he comes back for his father’s funeral determined to sell his one-third share of the family ranch. Except his irritable, unappeasable father threw one last curveball—to inherit, he and his brothers have to live together on the ranch for a year. The ranch needs massive repairs on a tight budget and even tighter timeline, and the best contractor in Garnet Valley is unfortunately the one woman who never wants to see him again.

August “Gus” Jones is determined to prove she’s ready to take over her father’s struggling construction firm. Which means she can’t turn down the lucrative Hartman Ranch job, even though the man hiring her is Colton Hartman, the man who disappeared after she declared her love and broke her heart.

As Colton once again works the ranch, the attraction between him and Gus quickly flames. Can she convince this stubborn cowboy that this time love is worth sticking around for?

August Jones sped down the lone highway to town, accelerating so that the needle pointed to five miles per hour past the speed limit. Hopefully, there was no officer parked on the edge of the usually deserted stretch of highway that led to a handful of ranches and ranchettes outside Garnet Valley, Montana.

Or if there was an officer, hopefully it was someone she knew and who was a little lenient with the speed limit. She could not be late to this project meeting. If she wanted to successfully take over Jones Construction and break into landscaping, she needed to be at this meeting, on time. This project was her opportunity to finally follow her dream, and she wasn’t going to lose it.

Unfortunately, she had been so focused on preparing for this meeting, reviewing the project requirements, and figuring out who they could team up with, that she had not noticed her horses had gotten out. By the time she got them back into their pen, it was too late to change out of her button-down shirt and jeans. She just grabbed her boots and ran out to her truck.

Gus barely noticed the herd of deer in the yellow-green field of grass flattened by the past winter snow. Her truck charged up the worn gray highway. The top of the hill led to one of her favorite views—the wide endless range of purple-blue Absaroka mountain range, capped with snow, surrounded by the valley of greens and yellow flora. The truck hit the top of the hill and she accelerated a bit more.

Up ahead, a small white dot on the side of the road caught her eye. The dot grew as her truck flew closer.

An SUV. A shiny one without the layer of dust that usually caked the cars from endless drives up and down the dusty dirt roads. She squinted at it and let off the gas a hair.

There were only a handful of neighbors that lived on this highway. None of them drove a vehicle that looked like this. At least that she could recall.

She eased up on the gas a little more. The miles of wood and wire fence continued to whip past and the SUV grew closer.

Did one of her neighbors need help?

Gus glanced at the clock and tucked her hair behind her ear.

She could not afford to be late. This was the initial meeting that kicked off renovations for the town’s two parks and their surrounding structures. Projects this large did not come by frequently in Garnet Valley, and she didn’t want to miss this opportunity.

Now what to do about the man?

She could call highway patrol. Then she would have done the neighborly thing, and she’d still make her meeting on time. That wouldn’t make her a terrible person. Right?

Her truck was now close enough that she could see someone standing outside the car with their cell phone in the air.

Not a neighbor. Anyone who lived in this area even six months knew this spot on the top of the hill was a dead zone for cell service. You had to go a half mile in either direction to get it back.

Okay, perfect plan, she would call highway patrol in a half mile, they would be there in twenty minutes, tops, and she would still have helped a person in need.

The guy was hatless, and his dark hair shone in the late morning sun. He waved frantically at her, one hand stretched high in the air, making his tall, lean body seem even longer.

She roared past him, her foot frozen on the gas.

Her brain kicked into gear, and she hit the brakes, slowing her giant three-quarter ton pickup until she could ease onto the side of the road, gravel crunching under her tires. Glancing at the clock, she gave up any hope that she would make the meeting on time.

She was just like her mom—couldn’t help but stop for a neighbor in need.

Even if this man looked achingly like Colton Hartman.

Her heart hammered against her ribs.

As far as she was aware, Colton had not stepped foot in Montana in over a decade. She hadn’t seen him since the night she told him she loved him, and he told her he was leaving the state for good.

Twisting around in her seat, she peered behind her. The man was looking down at the ground, his cell phone in his hand.

It had to be Ty, Colton’s younger brother. Ty still lived in Garnet Valley and frequently went out to his father’s ranch, even more so since Beau Hartman passed away in a car accident only three weeks ago.

But then it would also make sense if Colton was back in town as well. The funeral was only two days ago.

Her breath caught as she pieced the connection together. Butterflies unfurled in her lungs and stomach, beating against her diaphragm so hard, it was impossible to breathe.

“Get a grip, girl,” she muttered to herself. “We’re moving on from this stupid high school crush, remember?”

Flipping a U-ie, she started back for the SUV. Her best friend, Steph, would no doubt have an earful to say about this.

Pulling up on the opposite side of the road, she parked her truck and turned it off. Glancing over her shoulder to make sure no one was coming, she stepped out.

The smell of prairie grass and old asphalt greeted her nose, and a spring chill pricked through her jacket.

Her body felt overly light as she walked to the car, nerves making her hands and legs feel numb. Her pulse throbbed in her ears, louder than a ticking clock when she couldn’t sleep.

The man looked up as she headed across the empty highway, and his gray-blue eyes connected with hers.

Old, familiar emotions slammed into her, nearly knocking the air out her body.

“Gus?” His voice was warm with recognition.

The man had somehow gotten sexier over the years. The lean ropes of muscles that filled out his long-sleeve black Henley shirt now swelled into broad shoulders and tapered into a narrow waist. The designer jeans were not Wranglers, but they still did a fair job showing off those thighs of his. His face, which had been handsome but softer in high school, had become chiseled, a shadow of beard on his square jaw.

Not fair. Not fair at all.

“Colton,” she squeaked out. Unsure of what to do or say, she waved awkwardly at him.

On those late nights, when she would reminisce about her late teens and imagine what she would do if Colton ever returned, the awkward wave was never something she had envisioned herself doing.

Heat crept over her entire face. There was no way her skin was anything less than fire engine red right now.

No. Not these feelings. Not for him. Why, now that she was determined to move on from her past, did her past have to show up?

“What are you doing here?” he asked. As though her being here was more ridiculous than Colton coming home.

Looking his car over, she noticed the front tire was no longer round.

Great. She was already late to her meeting. This was going to make it worse. However, she couldn’t leave him stranded on the side of the road with a flat in a cell phone dead zone. The alternative was to take him into town with her. It was weird enough seeing Colton; she wasn’t sure if she could handle sharing the small space of her truck with him.

Thankfully, years of working for her contractor dad had made her far handier than half the men she knew, and she was able to change a tire in fifteen minutes.

She forced a smile to her face.

The Cowboy’s Return is currently available in digital format only: 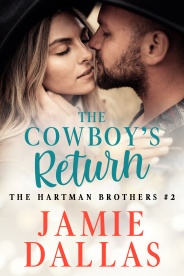 Did you know that The Cowboy’s Return and many titles are available digitally from Tule's own bookstore? Check it out!