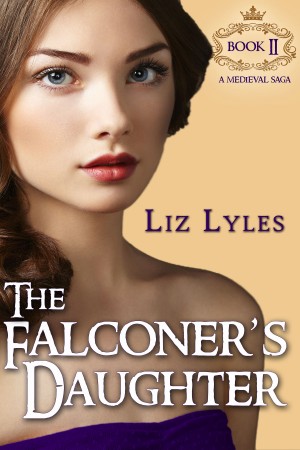 When young Lady Anne Macleod runs off with her true love, the handsome young falconer, Kirk Buchanan, she inadvertently sets off a chain of events that turns her young daughter, Cordaella, into a pawn between wealthy lords locked in a game of power, wealth, and greed.

At age nine, Cordaella is forcibly taken from her Highland home, and given to her uncle. Once there, Codaella learns the truth. She is the heiress to the Macleod fortune, to the dismay of many of her family members.

Thrust into an uncomfortable new life in England with her uncle, the Earl of Derby, she is unaware that she’s being groomed for a marriage to a Castilian duke who cares nothing for her and everything for her dowry…

Will Cordaella continue to act as a pawn in her family’s games or will she seize her own destiny?

Cordaella rested the long handled spoon against the edge of the pot, standing carefully, unable to fully repress the sigh. The day had been nothing but interruptions, countless last minute tasks before the king’s arrival. The cauldron hissed, drawing her attention again, steam rising from the bubbling surface. She knocked the burning wood flat, scattering the hot logs deeper into the hearth. Already the day felt long, and nothing had been accomplished. “What is it?” Her impatient tone wasn’t lost on the little girl.

“’Oy!” Bernice, the head cook’s fifth daughter, was slight and fair, still lisping although well out of babyhood. Now, in her excitement, the lisp became more pronounced, and her whole body quivered as she delivered the message. “The knight ith here,” she breathed and shivered, “yeth, yeth and he’th wanting you.”

“The knight?” One winged brow arched higher. “We are expecting thirty-two knights, which knight might this be?”

Drawing her bare forearm across her mouth, Cordaella blotted the perspiration and fatigue. “Help me, child, I am too weary for games.”

Reproachfully the child jerked back, her feet dancing beneath her, winged hands balling her apron. “The Irithman!”

Cordaella heard the child’s answer over the slow boil of the kettle, the pop of burning wood. The kitchen, warm and familiar, glowed with the dull shine of copper against iron and the dusky red of fire on stone. She inhaled, smelling thyme, sage, chamomile, the fragrance soothing, cool and dark. “Where is he now?”

“In the hall, mith. But he aths that you hurry. He muth—oh!—he muth put hith horth up.”

She patted Bernice gently on the top of her fair head, thanking her. “There are some sweet buns cooling at the hearth. I am sure your mum wouldn’t mind if you just had one. But hear! Just one, or else all the children will be in wanting some.”

Cordaella spotted him immediately as she emerged from the heat of the kitchen. Slowly she wiped off her damp hands, her fingers trembling in the soft kitchen cloth. For an endless moment she hesitated in the doorway, waiting, holding her breath.

A day’s growth of beard darkened his face, his boots muddy, his leggings dusty. He was still tall, still the same armor chest plate that barely reached his waist, tanned blackened leather enforced with metal and silver. “Hello.” She couldn’t smile, her lips numb, her face stiff despite the thunder in her chest.

“Are you hungry, my lord?” The silence of the cool hall engulfed them. Shadows of a tree patterned one wall with dancing leaves. “My lord?”

“The king and his retinue are slowed by the mud southeast of here. They may not arrive until tomorrow.” His tone was formal. He didn’t say that he had changed horses twice to make it in six hours from Jersey Castle.

“Won’t you please let me fetch some wine for you? A cool drink might be welcome.” She could see the color rise in his face, his eyes brilliant blue against the flushed cheeks.

She twisted the kitchen cloth between her hands. “How so, my lord?” Did she disappoint him then?

“Your face, your voice—you’re not a girl anymore.” He looked away, watching the shadow of leaves on the white-washed wall. “Forgive me, it is not my place to speak.” He leaned over to set down his helmet, then pulled off the leather gloves. “You are, I hear, betrothed.”

“Yes, my lord. Last autumn.” Her heart beat harder, a prickling sensation in her stomach. She was nervous, and afraid. The earl wouldn’t like her speaking privately with the knight. All the rules of decorum.

“Has it been so long since I was last here?”

“Yes, I remember.” His gaze roved over the hall’s heavy furniture, the polished floor, the walls hung with new tapestries.

“I have somehow disappointed you, my lord. I am sorry.” She could scarcely hold her ground, her face scarlet. She wished she was dressed better, that she had fixed her hair with a prettier headdress. She could feel the dampness beneath her arms and the bodice of her gray houppelande. The sleeves of her gown had been rolled back three times to keep the silk cording out of the broth.

“You could not disappoint me, Lady Cordaella.”

She heard his answer, but still felt the weight of his tone. In his voice she heard the distance, the surprise at the changes a year had made in her. And she knew everything was different. It had to be. Not only was she older, but she was betrothed. “I think I should fetch someone. Lady Eton, perhaps.”

“You are afraid of me now. Why?” He took several steps towards her and she backed up. “See?”

She turned away, shy, unusually timid. He was older than she remembered. Harder. She would not meet his gaze, his eyes so blue they hurt. “You, too,” she whispered, “are changed.”

Abruptly he walked away, towards the door, his broad back hidden by the weight of leather and silver, his sword clanking. His rejection hurt her and unconsciously she pressed one hand against her chest, as if to soothe her heart.

“Did you know that I am not easily distracted?” His voice was low, tense. “Did you know that I have a reputation among the others for being hard, even callous? They say that I have no heart. No feelings. Not even remorse. Yet in this last year, even as I campaigned with Clarence in France, I thought of you. I don’t know why, but I did. You were somehow always with me.” He half-turned in the doorway. “Isn’t that strange?”

She didn’t know what to say so she said nothing.

“Did you ever think of me?” He sounded tired, as if his voice were stealing his energy. “Can you answer, or must we fetch this chaperone of yours?”

His cynicism hurt her. “Of course I thought of you.”

“Did you? And what did you think about?”

She could not see his face, not even his profile. Only his voice reached her, and that was cool, detached. “Your accent. The way you say certain words.” She wished he would come back, come closer. He felt so far away standing in the doorway, as if he was already planning on leaving. “I thought you were one of the kindest people I have ever met.”

“Kind? If there is anything I’m not, it is kind.” He said the last word as if it was foreign, the vowel rolling on his tongue.

She followed after him, her steps slow, uncertain. “There are other things I thought, but those things—” she flushed as his head turned to look at her “—I cannot say. It was a curious year for me, too. I didn’t want to be betrothed. I didn’t want to have to think about marriage or leaving Peveril. It seems like I only arrived a fortnight ago.” She stopped walking, her hands pressing into her skirts. “When you were here last, I felt like a young girl. I didn’t want to think about the future. I was still too angry, too hurt, over the past. But now—” and she broke off for a second time, as her eyes met his “—now I look only forward. What else can I do?”

“You have yourself a prosperous match.”

“That isn’t fair.” Bright spots of pink stained her cheeks. “Is that why you are here now? To mock me? To hurt me?”

“No.” He turned to face her but he was still at a great distance and his face was shadowed. “I am here because I wanted to see if what I remembered was true.”

“What did you remember?”

“It doesn’t matter. At least I know.” He sighed heavily. “And, what is to be, shall be. The Duke Fernando is fortunate, my lady. I would that I were he.”

She tried to keep her tone light, but her face felt numb, her tongue heavy in her mouth. “My cousin, Philip, once said, ‘the river shall always return to the sea’. I think he was right. I’ve learned that no matter how many little twigs and stones I put before this river, it shall still run through to the sea.”

“Ah, yes, Fortune. And how is your uncle lately?”

“Well enough.” She wondered if she would ever be able to tell him what she knew about the earl. “I have learned more about him and all of us—” She was interrupted by a shout from the front steps. Heavy footsteps sounded, announcing the Earl of Derby. “I can’t be here when he arrives.”

“You will meet me later?”

She glanced towards the doorway. “I really shouldn’t—”

She wanted to see him, she wanted to speak with him again. How could she say no? “How will I meet you? And when?” She began backing up, hurrying towards the kitchen.

The Falconer’s Daughter – Book 2 is currently available in digital format only: 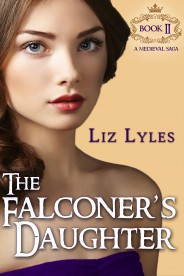