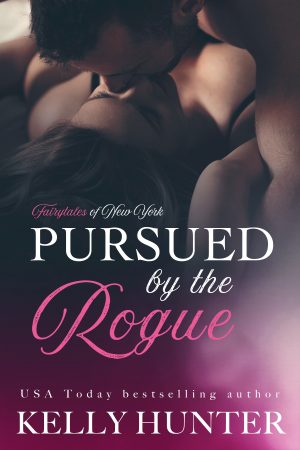 Pursued by the Rogue

A no-strings affair between two dedicated professionals? It should have been the perfect solution.

Ugly duckling Dawn Turner doesn’t do relationships. She has her reasons and they’re good ones. But she can’t resist the magic in Finbar Sullivan’s touch, so she negotiates the next best thing with him. Scorchingly perfect, utterly casual sex.

World class musician Finnbar Sullivan always pushes the limits to get what he wants, and he wants Dawn. All of her. Love, commitment and a future together. So he reneges on the deal and composes a new one.

So what’s stopping her? And will Finn’s latest offer be enough to change Dawn’s mind?

Finbar Sullivan had a decision to make, and it wasn’t a Beethoven versus Mozart type call. He could declare his interest in Dawn to the world – or at the very least to his sister –and set about making something happen, or he could try to ignore the inexplicable hold Dawn Turner had on him and carry on as usual.

Not much of a decision at all.

But Gil was back with Emmy now – a small violin in tow, and Finn smirked afresh at the memory of the dismayed resignation on Emmy’s face when Gil had shown her his new favorite instrument.

“It’s time,” Finn had told her simply. “Josef would have wanted it. Gil knows what to do between now and when he sees me next.”

“You’re not the one who has to listen to him practice,” Emmy had murmured on her way out the door.

“Thank you,” she’d whispered and bussed his cheek for good measure. “I know Joey would have wanted music for his children. My son’s a lucky boy.”

That wasn’t to say it couldn’t be better.

Finn slid behind the bar and began stacking glasses into the dishwasher. It was always easier to get Faith’s attention when he was doing something useful. “So how went the reunion the other night?”

“Not bad. Kind of a testing of the waters and the waters were … warm.” Faith’s eyes took on an unholy gleam. “Dawn thought Gil was your son.”

“I hated to disabuse her.”

“But you did. You disabused her, right?”

“What does it matter?”

It mattered. “So are any of your school friends married now? Partners, significant others, children of their own?”

“Mercy’s not. Neither’s Zel. No partners, no kids.”

Finn waited, but nothing more was forthcoming as Faith headed down the other end of the bar to tend one of their regulars. She didn’t seem inclined to pick up where she left off when she returned.

Finn heaved out a sighed. “Are you really going to make me do this the hard way?”

“After your performance the other night? Absolutely. It’s what sisters are for.”

“She wasn’t wearing a wedding ring.”

“Doesn’t mean much these days,” Faith said blithely. “Would you wear one if you were married?”

“You know I would. C’mon. You know what I’m fishing for.”

“Brothers,” he heard her mutter beneath her breath. And then she took pity on him and reached up and wrapped her hand around his neck and tugged him close. “Dawn’s single too, no kids, and if you play her the way you play everyone else I will castrate you.”

“Fast, loose and with a great deal of skill. Don’t you have enough other women to dazzle with your charms?”

He pulled away. He didn’t know how to say what he wanted to say. “Have you ever heard a piece of music that you have to learn, no matter how difficult? Because you know you’re going to want to play it for the rest of your life? That’s me when I get anywhere near Dawn. Fast and loose isn’t what I want at all.”

Not their usual level of disclosure, that was for sure.

He rubbed his hand across the back of his neck, where Faith’s hand had just been. “Forget it.”

“Unlikely,” she murmured, still staring at him. “What do you want to know?”

“About Dawn? Whatever you can tell me. What she’s doing in New York. Whether she’s seeing anyone. Whether she wants to.”

“Dawn’s not seeing anyone, she has an apartment in Soho that I suspect she owns and she’s made a lot of money out of medical research and streamlining various genetic tests. Gene mapping. That kind of thing,” Faith offered. “She’s driven when it comes to her research. Same way you are when it comes to your music. Whether she’s looking for a relationship …” His sister looked a little sad. “I don’t know. She’s successful by anyone’s standards but she still doesn’t seem to think much of herself.”

“I don’t know. So whatever you do, don’t make that worse.”

“You have no faith.”

The pun was too old for her to do more than roll her eyes. “I know. I have bills to pay instead. Would you like some?”

Sully’s barely made money. Simple fact. “How did Sully’s go this month? Did we break even?”

“Have you taken your wage out yet?”

Good news. Finn knew for a fact that when times had been lean, Faith had often rolled her wage straight back into the business. “You ever think about trying to convince the old man to sell?”

“What are your thoughts on selling it?”

“Why would we?” she countered defensively. “This is our home, Finn. The heart of this family is right here. Our memories are here.”

“Do you really believe that?”

“Mom’s here,” she countered stubbornly, and Finn was the first to look away.

Kathleen Sullivan had run Sully’s alongside her husband. She’d lived for it, loved in it, raised a family within these walls. His mother’s decisions were stamped here – from the color of the barstools to the pictures on the walls. And Faith, more than any of them, kept the family legacy alive.

But she did it at the cost of her own artistic dreams, and this itched at Finn. Made him feel guilty for not doing more.

“Want us to start playing live music on Friday afternoons again?” That always pulled a crowd and made their father happy. “I’ll organize it with Ronan and Case.”

“I’ve already asked. They start touring again next week. They don’t have time.”

If he could make time, so could they. “I’ll use words they can understand.”

Faith bit back a laugh. “Good luck with that. What words are you going to use on Dawn?”

“Not marriage, babies and eternal love?”

Got to save something for the finale.

Pursued by the Rogue is currently available in digital format only: 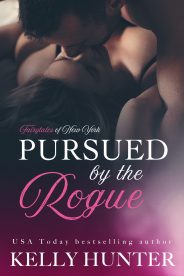 Did you know that Pursued by the Rogue and many titles are available digitally from Tule's own bookstore? Check it out!