Texas Ranger Samantha Goode never backs down from a fight, especially one right outside her door. Settling into small town life after a long absence, she’s focused on second chances – for herself, for the town, and her renewed relationship with rancher Clay Barnett. But when a dead woman is found on her best friend’s property, Sam’s investigation threatens her fresh start as the residents of Crystal Creek come under suspicion.

Soon, more bodies are discovered from San Antonio to Houston, and Sam realizes she’s hunting her most dangerous opponent – a serial killer. As she chases leads across the state, Sam follows the killer’s trail back to Crystal Creek and those she loves. She’s determined to protect the townspeople, but what if one of them is the evil she hunts?

When the case comes down to her badge or her friends, will Sam have what it takes to fight the Goode fight?

A turkey buzzard, its head as red and raw as an open wound, rode the thermal current in a slow spiral. Texas Ranger Samantha Goode took a sharp turn too fast, her Jeep Wrangler fishtailing on the dirt road. She fought to control the skid, barely noticing the faded Last Chance Ranch sign as she passed beneath it. Slowing as she rounded the windbreak of fifteen-foot yaupon trees, Sam drove past the main house and pond, leaving a cloud of dust to drift over the storm-damaged bunkhouse.

She’d promised to help Nicole Chance clear a stretch of land and plant a winter food plot for the deer on the Chance family’s hunting ranch. But after a long night of great sex and very little sleep, Sam had still been dead to the world in Clay Barnett’s bed when her phone rang. Though Sam had felt like the world’s worst friend for oversleeping, Nic hadn’t been calling to give her shit about being late.

A low-fence hunting ranch, Last Chance sprawled across a couple thousand acres just outside of Crystal Creek. Using the GPS coordinates Nic had texted her, Sam navigated the interior ranch roads, heading away from the living quarters and hunting areas. She sped around a curve, then stomped the brake pedal to the floor. Skidding sideways, she stopped just short of hitting a deer. The whitetail doe turned her head, liquid brown eyes appraising Sam, before continuing across the road. Cursing under her breath at the close call, she put the Jeep back into gear and rolled forward.

She finally spotted Nic’s battered old Ford Bronco parked on the shoulder of the narrow road. As soon as she stopped and climbed out of her Jeep, her ranger instincts kicked in. She paused a moment to listen, her gaze sweeping the area, right hand hovering near the gun on her hip.

Crossing the road, Sam pushed into thick brush, stopping short of the clearing. Nic stood near a stand of live oaks, her head on a constant swivel to check her surroundings, her long, black braid flipping with each movement. When a twig snapped beneath Sam’s foot, Nic spun and dropped into a knife-fighting stance, her hunting blade at the ready, reflexes well-honed from years as an Air Force sniper.

“It’s me,” Sam called as she made her way closer to her friend.

Nic straightened, her features smoothing with relief. “Glad you made good time. I wasn’t looking forward to going toe-to-toe with any critters who decided to scavenge.”

“Thanks for waiting out here,” Sam said. “Helps with the integrity of the scene.”

“Did you call Eddie?”

“Right after I talked to you. But he’s on vacation. Fishing with Mark.”

One of Nic’s brows arched. “Your ex-partner, Mark?”

“Yeah. I left a message on his cell. Didn’t want to call dispatch and wind up with one of his deputies out here, taking charge.”

“Okay.” Nic nodded, her eyes darting in every direction.

Nic was tough. She’d seen things in Afghanistan that to this day she refused to talk about, yet she’d deployed time after time. But right here, right now, it was obvious what she’d found on a remote part of her own ranch had shaken her.

“Where is she?” Sam moved past Nic, shielding her eyes against the rising sun as she peered across the field.

Nic gestured toward a huge tree. The live oak’s full branches stretched out in every direction, creating an intimate area beneath it. Perfect for children’s tea parties, lovers’ picnics, and apparently the disposal of dead bodies. “I may have left some footprints up to this point, but I stopped and backed up as soon as I saw her.”

A shadow slid across the sun and Sam eyed the raptor still circling above. “I’m glad you found her before the birds did. Otherwise, we’d be piecing her together like a jigsaw puzzle.”

“I noticed the buzzard on my way to the plot. Hoped it was a dead squirrel or armadillo, and not a wounded deer. But figured I better check it out.” Nic grimaced. “The hunting group that was here this weekend was less than experienced.”

“Were you their guide?”

Sam started across the field toward the tree, Nic next to her. They gave the area a wide berth, circling around to the north. Still thirty feet away, a pale form took shape at the base of the trunk. As they moved closer, details came into focus.

The young woman lay face up, flattening the wild grass and weeds beneath her. Her hair, long and dark like Nic’s, stretched across her shoulders and down to her hips. A few strands rose in the early morning breeze, as if refusing to surrender their hold on this world. Dressed in what looked like a modest white nightgown, hands clasped over her flat stomach and legs pressed chastely together, the woman looked almost peaceful. As if she’d just lain down to rest and fallen asleep. Until one got to the gaping holes where her eyes had once been.

A chill raced down Sam’s spine despite the Indian summer heat. As a cop, she’d seen the horrific things people could do to each other. But this was a first.

“Never seen her before.” Nic cleared her throat. “That I know of. It’s hard to be sure. You think a bird got her eyes?”

Sam shook her head. “If it had been a bird, there’d be more damage to her face. It almost looks like they were surgically removed.” She glanced at Nic. “I think whoever killed her took her eyes.”

“Sick.” Nic’s lip curled in distaste. “That was done after she was dead, right?”

Not wanting to guess at the why or the when, Sam shrugged. “You and I both know there are some crazy-ass people in this world.” She squinted at something across the woman’s forehead. “What’s that?” She moved closer and hunkered down for a better view.

A wilted dandelion chain encircled the woman’s head like a macabre crown, set with ruby red gems of dried blood.

The Goode Fight is available in the following formats: 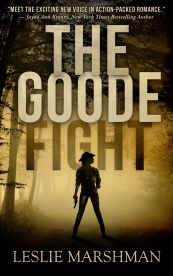 Did you know that The Goode Fight and many titles are available digitally from Tule's own bookstore? Check it out!