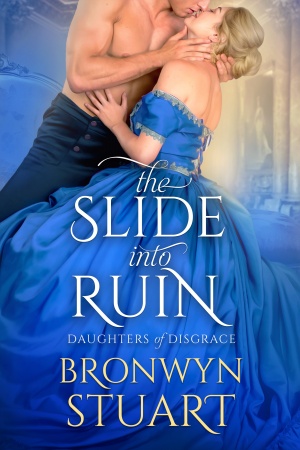 The Slide into Ruin

He came to collect a debt. He left with a wife.

Darius may be an ex-pirate and nameless bastard, but his word is his bond and damsels in distress are his weakness. In order to collect a large debt and rebuild his lost fortune, Darius takes Eliza Penfold as his wife. It’s supposed to be a marriage of convenience, not passion. But from their first encounter, she stirs his blood like no other and Darius wonders if he can truly leave her behind.

Deceived into a marriage contract with a dangerous man, Eliza is forced to admit she and her siblings need protection. She needs to let go of her wounded pride and flawed schemes if she’s to survive. But when her protector is a vengeful pirate running a scheme of his own, she may be getting far more trouble than help.

They’re both hiding something and when one of England’s most notorious and vicious criminals comes to call, lives will be in danger and loyalties will be put to the ultimate test…

At the first sound of shuffling feet, the ex-pirate turned legitimate captain known as Darius held his breath and stilled his entire body. Who he waited for, friend or foe, he would soon discover.

The nicely appointed rented room above the noisy tavern was cloaked in darkness, but he didn’t need the light to see. Spending more than half of his life at sea, and in the dark beneath decks, had leant his vision an almost supernatural edge.

The shuffling paused on the other side of the locked door, there was a mutter and what sounded like…kissing? Darius swore under his breath but held his position. This was his second-to-last loose end before he left England behind forever and he had to ensure there were no outstanding debts of his own, imagined, obligated or other. The many and varying sins of his youth would not catch up with him in the following years. He wanted to wipe his slate clean after these last errands. It’s why he hid in the dark awaiting a man who probably would rather drive a knife in his back than offer absolution. On one level, he did deserve it.

Finally, the bedroom door opened, and a dim pool of candlelight fell across the floor. His heart thumped against his ribs and his hands grew clammy with the effort it took not to reach for the pistol resting safely in the holster beneath his coat. If he died tonight, then so be it.

Two figures entered, one very large and definitely male, the other slight, a woman. He’d hoped for only the man but the woman might very well mean Darius would walk from the room rather than be carried out in a box.

His fingers twitched to hold his weapon as the candlewick was placed to the lantern and the entire room lit, chasing away the shadows.

First a feminine gasp, then a masculine oath, then the sound of a hammer being pulled back from the chamber of a long-barrelled, gleaming pistol pointed in his direction. How he missed swordplay on the decks of a ship. So much more intimate. So much fairer in a fight than lead balls impossible to dodge or deflect.

Darius didn’t rise. He didn’t react at all other than showing his hands were bare in a gesture of defencelessness. A gesture he hoped would be believed in order not to feel the scorching kiss of one of those bullets.

Captain Richard Germaine spoke first. “What the devil are you doing here?”

He may as well get straight to the truth of the matter. “I came to make amends.”

“You kidnapped my daughter!” Germaine countered with an angry wave of the pistol.

“I kidnapped her from her kidnapper.”

“And then you married her to him, the bloody Butcher of the Battle!”

“A man she is deeply in love with.”

“You could have conked him on the head and left him to rot. Better still, you could have thrown him overboard instead of scaring Daniella into thinking it was her you were after.”

Darius smiled. Of course, she would tell the story her way. “She has your stubbornness. Someone had to make her see the truth.”

Germaine sighed and sat on the edge of the bed, bidding the woman to do the same while also keeping her close, gun still in hand while he rubbed the bridge of his nose with the other. “Why did you get involved? You had to know your presence would have stirred rather than assured.”

“Perhaps that’s why? I believe you once labelled me a troublemaker.”

“I labelled you a good many names, lad. I was right about most of them. What kind of trouble are you causing tonight? We thought you’d be on your way back to Boston and Montrose.”

He should have been. He owed Deklin Montrose, his employer, more than he could ever list but there was the matter of debts to be collected from three men in London first. Then he would be free. Free to start his life afresh with means and respect. He and Montrose were fast friends—nothing would ever change that—but Darius paid his dues. He would never be beholden to another as long as he lived. They would be equal partners in the shipping venture or nothing at all.

“No trouble,” Darius assured the man who had once tried to take a young boy under his wing only to receive a mutiny for his trouble. The deep scar on Darius’s collarbone suddenly throbbed as if his miserable conscience resided right there just next to his neck.

“I need to know…” How could he put it? How could he ask for forgiveness without seeming weak, needy or vulnerable? Perhaps all three?

“Need to know what?” Captain Germaine grew nervous, moving closer to his ladylove as though he needed to protect her from him.

Darius swallowed uneasily, the long years of guilt lodging in his throat. “I need to know that I’ve atoned for my actions all those years ago. That there is no ill feeling or thoughts of retaliation between us?”

“You did this, you kidnapped my daughter—”

“—from her kidnapper. At the time I honestly thought I was saving her.”

“You did all of this to apologise for a decades-old mutiny?”

Darius was rather confused about the turn of events himself. When he’d been a mischievous pirate on the high seas, he’d known when to stay and when to leave with his hide intact. He seemed to have lost the life-saving ability on the crest of a wave somewhere between Boston and Scotland. “You once intimated there was something I could do to make it up to you but you failed to say how.”

“I mean to build a life for myself, a real life, and I don’t need old ghosts tracking me down. I mean to make friends now, no more enemies.”

The captain shook his head and rubbed his neck. “Always were a strange lad. Is this the last time we’ll be seeing you?”

“No hard feelings?” Darius’s outstretched hand was enveloped in a much larger, more weathered one, shook once, twice, a third time. Freedom, the very air almost whispered. But it was more than a word for him. It was a promise.

“What will you do now?” Germaine asked.

“I have business in England.” Darius walked to the door, stopping only to look back one more time as the captain still shielded his ladylove with his body, offering her his protection as well as his heart. And she was a lady, this one, right down to her toes. An English rose.

How he longed for someone to protect, to give his heart to. But he was a bastard. He had no name other than the one he’d given himself and no English lady would give her heart into his keeping. His past was not only splattered with blood, it was drowned in it, along with piracy and worse. Eventually he would take a bride but not from the English. He only craved a peaceful, easy existence in Boston with a woman who cared nothing for names, for titles, for society. There they cared a lot less about who you were. As long as a man worked hard and paid his way, he was accepted. Darius could live with that.

He drew a deep breath. Hastily scrawled words written on tattered paper flashed across his mind as he shook his head. “No. Not for Montrose.” He bid a quick farewell and closed the door behind him.

He was on his own now. This time it was personal, a matter of pride, of honour and perhaps revenge.

As his fingers twitched once more to hold his weapon, Darius thought it might even be about death. About decades-old hurts and more recent deceptions giving him reason enough to eliminate the Earl of Wickham, his despicable sire, from his life, and this world, once and for all.

The Slide into Ruin is available in the following formats: 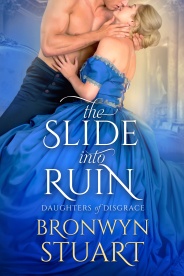 Did you know that The Slide into Ruin and many titles are available digitally from Tule's own bookstore? Check it out!