Tully Morgan hasn’t been back to Marietta for more than a few brief visits since the night of the 1996 senior prom eighteen years ago, when the chance exposure of a long-held family secret sent her running to her uncle in California in shock. She stood up her date Ren Fletcher that night, and she hasn’t seen him since.

Now she’s here for an extended stay, to help take care of her seriously ill mother. It’s an edgy reconciliation, the first time that Tully, Patty and Sugar Morgan have been together since that long ago prom night. Tully has had so much anger toward Sugar… can she ever forgive her?

And Sugar still has one more secret that needs to be dealt with, one that needs Ren Fletcher’s help. Has he forgiven Tully for leaving him in the lurch on prom night? And is there any chance that he and Tully can rekindle what they might once have had, when he’s still tied to someone else?

“You’re still holding that photo?” Tully asked her birth mother gently. She took the thin hand and pried the damp fingers open, revealing a fragile rectangle of shiny photographic paper. It was a spare passport photo, formal and unemotional, showing a very good-looking young man against a blank white background. “Look, you’re crushing it. It’s getting soggy around the edges.”

“I’m so nervous. I hate this. I’m afraid I won’t recognize him. I’m afraid he’ll hate everything he sees.” She sounded as if she was on the verge of tears, which made Tully want to cry too.

“How can you know that?”

“I don’t hate everything I see, when I look at you. C’mon!” Tully squeezed the frail hands and felt a welling of love that she wouldn’t have believed possible a few months ago.

“Hey, you’re welcome. And as for not recognizing him, you must have looked at that picture a thousand times since he sent it, and the other photos. You don’t think his face is grafted onto your memory, by now?” Still she spoke gently.

Really, she was almost as nervous as her mother about the meeting with her brother—her long-lost half-brother, the one she hadn’t even known about three months ago and had never met—and she understood the anxiety. There would be other passengers getting off the plane. Standing here, she and her mother were surrounded by people waiting to greet the incoming flight. Tully didn’t know the size of the aircraft, or whether the flight was full. It might get crowded and confusing when people started appearing, especially when she and her mother were both already so emotional.

Ren was here with them, like a rock in a stormy sea. Or like a lighthouse, maybe, guiding them faithfully. Thinking about Ren made Tully’s stomach kick with the prospect of loss. Not much longer and she’d have to say goodbye, and that would be that.

It was only a fling, could only ever have been a fling.

But his presence here at the airport was perfect and wonderful, despite everything. She would have found all of this so much harder without him.

“My memory isn’t all that great, sometimes,” her birth mother said, voice faltering in regret. Tully already knew the truth of this, and wasn’t surprised to see her sneak yet another look at the photo barely surviving in her hand. “What’s the time? Has the plane landed yet?”

“It’s about two minutes later than it was when we last checked, silly.” Tully pulled the bony shoulders close against her and kept the contact, feeling her mother leaning on her for support. She wasn’t strong.

He reached for Tully’s hand and squeezed it, because he understood about the nerves and the reason for them, then he unlaced his fingers and put his arm around Tully instead, so that the three of them stood close together. His body was big and sturdy against her side, strong and warm and familiar, smelling of sandalwood and clean skin. Tully’s heart and stomach did their usual lurching movements at the contact, and her bones wanted to melt with longing and fulfilment if she would let them.

She didn’t let them.

She’d had a big lecture last night from David—her uncle—about going home to Los Angeles, back to her job, back to her life.

“You have to bite the bullet, Tully, make a decision, or the decision will be made for you,” David had said.

“I have made a decision. I’m going back.”

“Have you told the studio?”

“If you haven’t told them, it’s not a decision. Lock it in. Make it real. I’m astonished they’ve let you have four months. You need to signal your commitment.”

“To yourself. Your life is in Southern California, not here.”

But she didn’t want to think about her decision, or what David had said.

But Tully knew she couldn’t hope for anything from Ren. She knew exactly where he was coming from, and where she wanted to go, and their directions were so completely different.

It was a fling, and it could only last a few more weeks. She’d begun to hide from him how much she minded about that, which didn’t feel good. It felt dishonest and uncomfortable and she didn’t know what to do.

“How long between when it says Landed and when they start coming through?” her mother asked, although she didn’t seem to expect an answer. She was muttering, half talking to herself. Tully answered her anyhow.

“It will,” Ren answered, and her mother seemed to believe him more than she believed Tully—another reason Tully felt thankful that he was here. He was the kind of man you did believe, always. He was competent and trustworthy and knowledgeable and rock solid.

The three of them stood together, waiting, arms still around each other, counting down the seconds until the plane taxied to the gate, opened its doors, began to let passengers stream onto the jet-way and along the concourse to the arrival doors.

After ten endless minutes, finally here were the passengers from the flight. A woman in a business suit, then two men striding together. Next came a family of four, and a string of three men on their own, consulting their phones as they walked.

Then Tully’s mother cried out, “That’s him. This is him. Oh, I do recognize him! I didn’t need the photo. That’s him.”

She burst into tears, and Tully folded her into a tight embrace and saw Ren watching her with something in his dark eyes that she knew was care… or even love… but that still didn’t count in the way she needed it to.

Because it can’t last.

“Let’s go meet him,” she said, her voice thick. She felt one last touch of support from Ren against her back as she walked forward.

The Sweetest Thing is available in the following formats: 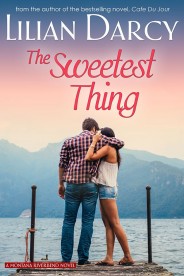 Did you know that The Sweetest Thing and many titles are available digitally from Tule's own bookstore? Check it out!