Carrigans of the Circle C, Book 2

Carrigans of the Circle C, Book 2

Mattie Carrigan‘s been helping her rodeo cowboy husband Wes Bishop run his family’s Tennessee Walking Horse operation since they were married nineteen years ago. Blessed with twin daughters who’ve recently left for college, Mattie is looking forward to this new stage in her and Wes’s life.

But when she finds a strange key in her husband’s jacket, she’s forced to admit that Wes has been quiet and distant lately. Turns out he has been keeping secrets. And he’s not the only one. Even the rancher next door, Nat Diamond–a friend Mattie could always count on in the past–seems to be holding something back from her.

Good Together is for anyone who has ever pondered what it means to be married. Or had to reinvent her life when one breaks down. It’s about having your heart broken but being strong enough to survive and love again.

The smell of burnt toast and eggs greeted Mattie as she replaced her boots with a pair of gray canvas slip-ons. After washing up at the stainless steel sink in the mud-room, she headed for the kitchen. Wes was at the island, his head bent over his I-pad as he finished up his breakfast with a cup of coffee.

“Hey. How are things out there?”

Since he hadn’t stood to give her a hug, she wrapped her arms around his neck and laid her cheek on the top of his head. Her husband was a small-framed man, but solid muscle. “Want to come out with me when you’re finished that coffee? We’ve got a couple horses that could use some work this morning.”

His answer was a sigh. “I’m pretty sore after the weekend.” His gaze dropped back to the I-pad which had gone dark. “Not that I have anything to show for my aches and bruises.”

“Bad draws?” She had years of practice at saying the right, sympathetic thing. The score in the rodeo ring was only fifty-percent under the cowboy’s control. The bulls were assigned by random draws—and not all of them were star performers.

She rinsed out the cup she’d taken with her to the barn, then refilled it. Still lots left in the pot. Both girls had become coffee drinkers after they turned sixteen and were allowed to drink the beverage at home. Mattie no longer needed to make a full pot every morning. But it was one of those habits that was tough to break.

Like cooking too much food and checking the girls’ rooms for dirty clothes when it was time to do laundry. And waiting for them to come through the back door after the school bus drove by…

She leaned her back against the counter, sipping the hot coffee and eyeing her husband. He was looking at the I-pad again, as if her presence was nothing but an interruption. That was when she noticed the key was no longer on the counter.

“I found a key on the floor by your jacket this morning.”

Wes hesitated a moment before answering. He seemed annoyed that she felt it necessary to ask the question and he answered with exaggerated patience. “I crashed with the Wilkinson’s this weekend. Peter gave me a key to their guest cabin and I forgot to return it. I’ll put it in the mail later today.”

A wild impulse rose in her—a desire to take his silly I-Pad and toss it into the garbage. What was he reading on there that was so damn fascinating? After four days apart, was it so unreasonable of her to expect to have a proper conversation with her husband?

Mattie willed herself to be calm. She’d try again, bring up another subject.

She raised her eyebrows. There was no point telling him they only had twenty-two horses in their stables right now. Wes was gone a lot, but he still made all the business decisions around here—and paid the bills. He was aware that last year they’d barely broken even. And without new clients or horses, they’d be lucky to do as well this year.

He grabbed onto his mug with both of his tough, sun-darkened hands and gazed down into it, his posture sagging with a sort of sadness Mattie had never seen in him before.
“Why won’t you look at me?”

He did raise his head then, but only briefly. Getting up from the stool, he went to the far window. The house had been designed open concept with a seamless transition between kitchen and family area. A river-rock fireplace with a heavy walnut mantel grounded the south end of the room. Large paneled windows to the west and north looked out to the pastures and Flathead Lake in the distance.

Mattie set down her mug next to her husband’s and went to stand beside him. She’d lived with this view for nineteen years, but never took it for granted. From here you could see almost all of their land. And it was beautiful.

Wes shifted, putting an extra foot between them. “Mattie–I’ve been thinking it’s time to sell.”

“What?” This was something they’d never discussed. She wouldn’t even have considered it an option. “But—this land is…” She couldn’t find the words to go on. She’d been raised to consider land the most important and valuable thing in the world. Her father’s ties to the Circle C were blood and marrow deep. And, being married to Wes, she’d come to feel the same way about Bishop Stables, too.

“I’m getting too old to rodeo, but I’m not interested in breeding and training Tennessee Walkers. That was Mom and Dad’s thing. Not mine.”

She wasn’t surprised that he was making this admission. She’d suspected as much for years. “But—what about the girls?” This land was their heritage, their birthright. But then an ugly suspicion rose up in her. Unlike her father who had made no secret of his disappointment in fathering four daughters, Wes had never seemed to care that they had no sons. After the twins were born he’d agreed with her that their family was complete. “Would you be saying this if we had a son?”

“Of course, not. Hell, Mattie, that’s not what this is about.”

She was relieved to hear that. But only for a second. She was beginning to see that he’d been thinking about this a long time, and by the firm set of his jaw, he’d already made up his mind.

Without any discussion with her.

This was not how their marriage worked. At least, up until now it wasn’t.

“But, how will we earn our living? We have four years of college to pay for.”

“Only because you pushed the girls to go. I still don’t know why. Neither of us went—and we did just fine.”

The further education of their daughters had been a no-brainer to her. With Wren, it hadn’t been an issue, she’d been excited to go, had already picked out a program at the University of Colorado. Portia, however, had required some persuading.

Mattie had been shocked when Wes sided with Portia, and they had argued privately for over a week. “Let her learn a trade, instead,” Wes had said. “She could be a hairdresser or work in one of those nails places. I see them everywhere I go.”

Finally he’d backed down and gone silent on the subject, leaving her to persuade her lovely, less academic daughter that secondary education these days was a must.
But all of this had taken place a year ago. She wasn’t going to let him pull her back into that argument now.

“Even if the girls could fund college on their own—what about us? How will we support ourselves, not to mention save for our retirement? It’s not like we have a big nest egg set aside.” Making payments to registered plans had never seemed important. After all, they weren’t yet forty.

“The proceeds from the ranch will be enough to take care of the girls.” Wes hesitated. “And you.”

Mattie stared at him. Finally he was looking at her, too, and his eyes didn’t look like Wes’s anymore. They were cold and distant as a stranger’s.

Understanding hit her like a bullet. She gasped, felt a physical pain explode in her gut. This must be what it’s like to die. You’re living your life—and suddenly you aren’t.

When he didn’t say anything, she was forced to put words to the awful thing.

“You want to sell the ranch. A-and you want to leave me.”

Good Together is available in the following formats: 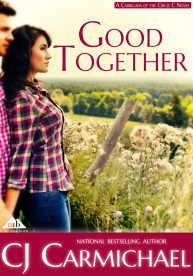 Did you know that Good Together and many titles are available digitally from Tule's own bookstore? Check it out!