Carrigans of the Circle C, Book 3

Carrigans of the Circle C, Book 3

Close to Her Heart

Dani Carrigan has always relied on logic when making important life decisions, but when she discovers she’s pregnant – and that there’s a chance her baby may be born “not perfect”– logic lets her down.

It would help if the baby’s father would pop the question, but widowed father Adrian seems more interested in protecting his six-year-old daughter than committing to his new relationship with Dani.

The last time she felt this alone and scared was when she was 16 and her mother died, leaving Dani to raise her younger sisters with precious little help from her distant and disapproving rancher father. She felt so inadequate then, but is she any more prepared to be a mother now?

Support comes from an unlikely source. Dani always saw her next-door neighbour and friend, divorce attorney Elliot Gilmore, as a charming, handsome, playboy-type. But with each challenge she faces, from pregnancy, to delivery and beyond–Elliot reveals himself a better man than she ever guessed.

Is it possible that Elliot hasn’t been playing the field–but waiting for her?

“So, have you told your family about the baby?”

“But you will soon?”

Eliot gave her an assessing look. “You don’t think your sisters are going to judge you because you’re not married?”

“Of course not. But I’d hoped to at least be at the stage where I could bring Adrian home to meet them.”

She just shook her head. She didn’t need to ask, to know Adrian would say no to that idea.
They walked a few more paces, before Eliot suddenly swore. “Why do you put up with his shit? You deserve a hell of a lot better.”

The explosion of anger caught her by surprise and made her angry, too. “Just shut up about Adrian, would you?”

“No more,” she insisted. “I knew when I got into this relationship that it wouldn’t be easy. Relationships among the faculty aren’t exactly firing offences, but they aren’t encouraged either. Adrian’s tenured. I’m not. The reason he’s so careful to keep our relationship quiet is to protect me, not him.”

“And you won’t be tenured for what—another four years? Is that how old your child will have to be before Adrian acknowledges that it’s his?”

A traffic light turned red, just as Dani was about to cross the street. Eliot grabbed her shoulder and pulled her back. She knew he was just watching out for her, but it seemed that he’d been a bit rougher than he needed to be.

He hesitated. Glanced away from her, then back, meeting her gaze squarely. “I care about you, Dani.”

“And I appreciate that. You’re a good friend. But you have to trust me to know what I’m doing. Adrian—he’s going to be there for me. It’s just—he’s had a lot to go through. With his wife dying, and then, the move. And now getting used to being a single father…”

The light turned green and they were able to cross. Dani could see their condo building just a few blocks ahead.

But she was still thinking about Adrian. “I wish he would talk to me about his wife. But he never even mentions her.”

She could feel Eliot grow tense. But he didn’t say anything. He did, however, hurl his half-finished smoothie into a trash can as they passed by.

She stopped and stared at him. “What is with you today?”

“I just can’t handle it anymore.”

“You. Adrian. This sick relationship you’ve got yourself messed up in.”

“Okay. We have some problems. But it is not a sick relationship. That’s a really low blow.”

“Come on, Dani. You’re the one with the psychology degree. Can’t you see why he doesn’t talk to you about his dead wife?”

Dani took a backward step. Suddenly she wasn’t just angry—she was scared. This wasn’t like Eliot. Eliot didn’t do serious. Eliot did funny and charming and sometime, when provoked, he did sarcastic.

“A lot of men internalize their emotions when they go through a loss.”

“Yup. And a lot of them try to numb the pain by seeking out pleasure from another source. The phrase I’ve heard is, an emotional crutch.”

“That’s what you think I am? Just a source of pleasure to numb the pain he feels at losing his wife?” She’d been aware of Eliot’s low opinion of her relationship with Adrian. But she’d had no idea he saw her as such a—pitiful figure. “Adrian and I have a real connection. You don’t have a clue.”

“Maybe I don’t. But I’m not the only clueless one here.”

The stubborn, angry expression on his face was one she didn’t even recognize. What had happened to the man that she’d thought was her friend?

Close to Her Heart is available in the following formats: 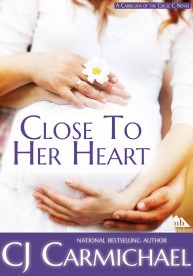 Did you know that Close to Her Heart and many titles are available digitally from Tule's own bookstore? Check it out!