With Love, From Kurrajong Crossing, Book 2 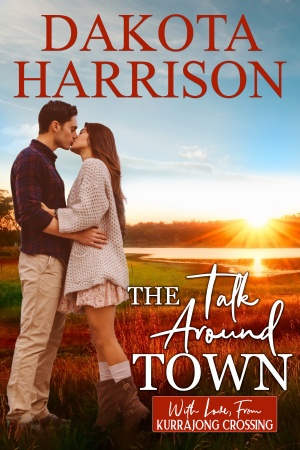 With Love, From Kurrajong Crossing, Book 2

The Talk Around Town

Moving to this small town might just be a huge mistake.

City girl Emma Johnson moves to Kurrajong Crossing determined to escape her troubled past and forge a bright future filled with new friendships, experiences, and even a pet cow. When the town starts a bet to see which of the many eligible bachelors around town will take her out first, she plays along. They’ll figure out soon enough that she isn’t interested in romance or relationships. Not now, not ever.

Country vet and cattleman Gabe Jameson knows the gossip surrounding pretty newcomer Emma will taper off eventually. In the meantime, he’s willing to lend a hand and help with emergency repairs to her rickety old house. It’s not as if it’s a date, or that he wants it to turn into something more. Pretty women are trouble, and Emma is stunning. Besides, he’s sworn off love forever.

It seems they might have something in common after all…

Gabe walked beside Emma as she sauntered down her house steps toward his ute.

There was a word for you. Not one he used all that often, but there it was. She sauntered, and damned nicely if you asked him. She’d had a burst pipe in the bathroom and being Saturday afternoon, couldn’t get a plumber. Harry Deeks had done the neighbourly thing and given her Gabe’s number. Gabe had done some handyman work about Harry’s place a few months ago, when Harry had broken his leg falling off a ladder while trying to clean out his gutters.

That was the reason he was here, standing next to this pocket bombshell of a woman. He’d been kicking around under her house, tracking the pipe back up to the bathroom where the wall had been damaged from the leak.

What made her even more desirable, besides the full, soft mouth and denim-blue, come-to-bed eyes, was her laugh. It was addictive, like a drug that was just out of reach, but you craved with an intensity that shocked you.

The first time he’d heard it he’d nearly fallen off the stool at his brother’s bar. Sitting down to eat quickly before the evening rush, he’d heard that incredible burst of sound wash over him from behind.

Turning around, he’d seen the woman they’d all been making such a fuss about. Her moving to Kurrajong Crossing, apparently from Perth of all places, was the most interesting thing to have happened in their sleepy little town in ages.

The insane thing was that she seemed to have no idea how incredibly gorgeous she looked. He darted a quick glance in her direction. Shorts and a West Coast Eagles AFL T-shirt. He rubbed his jaw to cover his slight smile. She’d need to be educated about the local sports and team loyalty. The subject matter of that shirt could ruffle a few feathers.

Her long, rich brown hair was pulled back roughly into a ponytail, with soft strands falling out all over the place. Covered head to toe in plaster dust, she didn’t look the kind of girl who was deliberately trying to hook a man. The problem was she looked all the more tempting for that fact.

She’d been in town a week now and already some of the guys were wagering on who she’d date first. There was a list. The blame for that could be laid right at the feet of his friend Ryan. Gabe thought it a little over the top, but since he refused to be placed on the list anyway, it didn’t really matter to him.

Not that he’d been asked to be on it.

She kept to herself, having come into the bar only that first evening she was here, and that had only been for directions. She’d hardly been seen since, which was something that had rattled more than a few cages.

“Lady, I think you have a problem,” Gabe said, glancing over at her.

Emma laughed. That unbelievable sound washed over his nerve endings, calming at the same time as inciting them. His breath caught. He had to get away from this little lady. She was trouble. Big trouble.

“Please don’t call me lady, Gabe. It makes me feel a hundred years old. Besides, no one calls anyone that in Perth.”

Gabe turned to face her, ignoring the rush of blood through his body in response to her smile. And that accent. It was amazing. The way she said certain words wormed inside his ears and wrapped around his brain.

“You’re not in Perth anymore. You’re in rural New South Wales. And here, people will probably call you that, particularly the older residents. One of those little things you’re going to have to get used to, I’m afraid. If you like, I’ll try to remember not to. How’s that sound?”

Emma’s mouth curved into a full smile. “Thank you. I’d appreciate it.” She looked at her dual-cab utility truck and shook her head. “Who would ever have thought I’d be driving one of these? They’re so damned big.”

Gabe eyed the large black ute parked on the circular driveway in front of them. He shrugged a shoulder.

“Whatever you’re comfortable with, I suppose. What made you choose it if you think it’s too big?” he asked, curiosity overriding his good judgement. He didn’t need to know details about this woman.

Her flat tone pulled his attention back to her again.

Gabe looked at Emma a little closer. This lady had secrets. He raised an eyebrow but said nothing. It was her business. Everyone was entitled to their own personal demons.

God knew, he had plenty.

“That it is. There’re wild deer as well as kangaroos around these parts, so if you’re driving at night keep an eye out, okay? Sometimes they’re hard to spot.”

The tight set left her features, and she nodded.

“Thanks, I appreciate that. When you move to a new place it’s hard to know the little things. The local knowledge. Usually you only find out when you do something stupid. You said earlier you have cattle?” she asked, curiosity making her eyes sparkle in the sunlight.

Gabe nodded and shifted his gaze to the left. Her ear looked very interesting all of a sudden. “Yeah. I have a farm a few miles out, on Hampton Road.” He turned and pointed to the south. “That way. I run a part-time veterinary practice from there, along with keeping a small herd.”

Emma nodded vaguely in the direction he’d indicated. “I’ve looked at the area map a few times this week. Just to try and get my bearings. It’s so lovely here. Why only part time for your practice?”

“I’m scaling back. Once my herd is at optimum numbers, I intend to only be a large-animal practice, since Vi is in town and looks after a lot of the pets already. The cattle are taking up more and more time.” He shrugged.

“That makes sense. I don’t know so much about the cows though. They’re a bit scary.”

Gabe let out a surprised laugh. “Scary? Nah, they’re just big ole steaks on legs. Pretty harmless really. Unless you get in the way of a bull.”

Emma’s smile widened. “Steaks on legs? I like that. But yes, now you know my secret fear. Cows. They’re just so big. They’re a little intimidating.”

Gabe shoved a hand through his collar-length black hair. “Once you get to know them, they’re all right. You should come out one day once you’re all settled in and I’ll introduce you to some. You’ll see they’re not so bad.”

Damn! Had he really just invited her out to his place? That was the last thing he wanted her to do. His brain was having a hard time keeping up with his mouth around her.

Emma looked surprised. “Thanks. I’ll think about it. So, what exactly is my house’s problem?”

Gabe glanced at Emma again. Harry thought he was helping the girl by being a good neighbour. Gabe wished he hadn’t. She was too pretty for her own good and too darn distracting. He didn’t need to be distracted.

“Your pipes are rusted out.”

Emma grimaced. “I figured as much. I suppose that’s what you get for buying an old house on the internet. I bought it on impulse. The estate agent said it had no termites or major structural damage—I didn’t think to get a building inspection done.”

She turned to Gabe, and the deep blue of her eyes hit him sharp in the belly. He edged toward his ute, torn between needing to be away from her and the unwanted feelings she seemed to stir up, and wanting to bask in them at the same time. For heaven’s sake, he’d only seen her twice and already his body was reacting like a teenager’s. It couldn’t be good for his health.

“The internet, huh? Seems a strange way to buy a house, from another state and all. But I suppose it was easier than having to come all this way just to see it. An inspection probably wouldn’t have shown up the problem with the pipes, unless they turned on the taps and it burst while they were there.”

Emma went to answer him, but her eyes narrowed when she glanced over at her driveway.

Gabe looked over and groaned out loud.

A light-blue, late-model sedan pulled up in front of them. Gabe shook his head. This was going to be hell.

The driver’s door opened and a slim young woman stepped out onto the gravel drive. She picked up a cake platter, bounced the car door shut with her hip and smiled broadly in their direction. She looked at him, the questions in her grey eyes obvious.

The woman walked the few steps to Emma and held out a hand, balancing the cake on one arm.

“Hi, I’m Darby Jameson. I thought it was about time someone welcomed you to Kurrajong Crossing. But I see I’ve been beaten to it.” She sent a pointed glance in his direction. “You’ve met my brother?”

Emma smiled and sent a surprised look to him.

“Apparently so.” Emma looked back to Darby and took her hand. “Thank you. Would you like to come in?” She stepped back, making room for Darby to follow her up the steps.

“Love to.” Darby looked at Gabe. “You coming too?”

Gabe shifted to his other foot and shook his head. “No. I was just on my way out.” He flicked his gaze back to Emma, who stood a couple of steps above him. “Nice to meet you, lady … I mean, Emma. I’ll see you around. You let me know if that pipe acts up again before Monday, okay?”

Emma nodded. “Thanks so much for coming. I don’t know what I would’ve done if you hadn’t.”

Gabe placed his toolbox onto the back seat of his ute and looked back up at her, his hand on the door handle. “No problem. See you, Darb.”

He slid into his ute, not waiting for an answer. She’d be in his ear later anyway, and he needed to get out of there before he changed his mind and stayed for some of that cake. He didn’t want his twin noticing how much that woman had affected him in such a short space of time.

And notice she would, if he stayed one minute longer.

The Talk Around Town is available in the following formats: 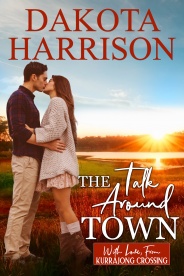 Did you know that The Talk Around Town and many titles are available digitally from Tule's own bookstore? Check it out!