To Love a Texas Cowboy

The legendary wishing well in Wishing, Texas promises to grant wishes only if they are made for another…

New York artist Cassie Reynolds moves to Wishing, Texas to raise her orphaned niece, and discovers she’s in way over her head. Then she meets Ella’s financial guardian, Ty Barnett, a handsome hardworking rancher, with his own ideas on child rearing.

Ty and Cassie clash over almost everything, especially Ella, but when two people have the welfare of one child at heart, suddenly they find themselves looking at each other in a whole new light…

Will Ty make room for another lady in his life? And will Cassie allow herself to love a Texas cowboy?

As Ty positioned himself a few feet away, Cassie dug dinner out and placed a chicken strip and fries on a napkin in front of Ella. The child shoved the food away, squeezed her eyes shut, and pursed her lips. Then when she turned, her eyes peeked open the tiniest bit, and she peered at Ty.

She wants to know if I’m going to let her get away with this show.

Her open defiance was new, as was the blatant manipulation. Before her parents’ death Ella had been agreeable and eager to please. An average six-year-old, full of energy and life, but now there was an edge to her. He’d seen the same change in Aubrey after she witnessed her dad being run down helping a stranded motorist. His sister’s anger at the world rolled over everything and everyone. Anger she didn’t know how to handle and couldn’t put into words. While understandable, Ella needed to see there were limits to what she could get away with, and if Cassie wouldn’t set them, he would. He owed Jack that.

“No pool playing until you eat dinner.” He raised his voice to be heard over the restaurant noise, but the booming sound and sharp tone made even him wince. He sounded like a cranky old man. A picture of him, years from now, sitting in a rocker on his porch, yelling at kids who wandered onto his land popped into his head.

When the child glanced toward him as if seeking his approval, Ty nodded. “Do as your aunt says.”

Hands on her hips, Cassie spun around and flashed him a back off glare. “I don’t need your help, and even if I did, who appointed you the food police?”

“What’re you upset about? I agreed with you.”

“Why am I upset? You really don’t get it?” She shook her head. “It’s none of your business.”

“That’s something else we need to talk about.” His gaze locked with Cassie’s determined green one.

“This is where I draw the line. If you think—”

Someone cleared his throat, cutting off whatever Cassie had been about to say, and Ty realized he’d moved closer. He and Cassie now stood almost toe to toe. How the hell had that happened? He shoved his hands in his pockets and stepped back. Then he noticed his friends glancing between the two of them as if trying to decide whether to take cover or sides.

“Lighten up, you two,” Zane joked, breaking the tension.

The words to tell Cassie Jack wouldn’t want his daughter becoming a master manipulator sat perched on his tongue, but he swallowed them. The game room at The Horseshoe with half the town watching wasn’t the place for their discussion.

After sending him another glare, Cassie turned to his friends. “Do all of you live here in Wishing?”

His buddies started talking all at once to gain Cassie’s attention, with Zane winning the battle by elbowing his way close enough to be heard.

“I live in California and run a computer gaming company.” Zane flashed Cassie his patented smile. The one Ty had seen make women go weak in the knees and forget their own names. As he moved back to a spot against the wall, Ty thought if Zane gave lessons on how picking up women he could retire a millionaire in a week tops.

“Be nice to me, and I’ll name a character after you in our next game,” Zane said as he leaned closer.

Cassie laughed. The bright sound danced over Ty, and he frowned, not liking how much he enjoyed the sound or the fact that another man brought it about.

“That’s a great line. Too bad you wasted it on me,” Cassie said. “Unfortunately for you, I saw you checking out the waitress when I walked over here. I know your type. You’re a BBD.”

“BBD is short for bigger better deal. This guy here”—she hooked her thumb toward Zane—“is never satisfied. Whatever woman he’s with only has part of his attention. The rest is focused on checking out every woman within fifty feet to see if he can cut a bigger better deal with someone else.”

“Admit it, Zane. She’s got you pegged.” AJ clapped his friend on the back.

Maybe there was more to Cassie, Ty thought. Not many women saw through Zane’s shallow flattery and shiny beads routine, and those rare few usually had one of two responses. They either didn’t care because of his pretty boy good looks or they believed they could change him. How odd that Cassie, a woman who hadn’t shown much common sense as far as he could tell, realized the truth that for Zane, it was all about the chase and the challenge.

Ty glanced at Ella. With the adults stood clustered around her talking and no longer acting as her audience she’d eaten almost one chicken strip.

“Don’t worry about Zane. He’ll use the line again. Probably later tonight,” AJ said, pulling Ty back to the conversation. “I work for the FBI. I could tell you about my job—”

“But then I’d have to kill you,” Ty and the rest of the group finished for him.

“What I was going to say was talking about my work isn’t a good subject considering the present company.” AJ nodded toward Ella who sat munching on her French fries.

“That’s very considerate of you.” Cassie smiled at AJ, one of those brilliant, feminine smiles full of white teeth that lit up her eyes. She sure had pretty green eyes when she smiled. Not that Ty had seen her look like this. With him she was contrary, but with his friends she was all smiles and laughter.

The thought soured his mood further. This hadn’t been how he planned things would go when he offered his pool table. They were to come over, play a quick game and leave. Instead here Cassie stood chatting with his friends, looking all pretty and inviting while leaving him feeling like the outsider.

He was a smart man who prided himself on being able to handle just about anything. At least until he met Cassie. Every time he thought he regained control of the situation she turned the tables on him. Worse yet, she had a knack of making him feel like a tongue-tied teenager.

The conversation and laughter swirled around him as his friends all jockeyed for Cassie’s attention. Bringing her and his friends together had been one of the dumbest ideas he’d had in a long time. These two parts of his worlds had no business mixing and it set his nerves on edge. You’d think the guys hadn’t seen a woman in a month of Sundays. He was about to say she should play or leave when AJ glanced at him, frowned, and headed his way.

When his friend stood beside him, he whispered, “What’s with all the glares between you and Cassie? You came pretty close to losing your cool with her. I’ve never seen that happen before.”

Cassie. What was it about her that made him want to draw a line in the sand and dare her to step over it? And how did she keep making him feel his world was spinning out of control?

“The woman is gonna drive me crazy. If I hadn’t promised Jack I’d watch out for Ella—”

And that was the heart of the problem, and why he couldn’t overlook when Cassie failed to set limits. “I’m not that much of a hard ass, am I?”

“Nah, you’re kind of stubborn, but that’s because you know what you want and refuse to compromise when you’re sure you’re right.”

“AJ, next time I need a pep talk, remind me not to come to you.”

“Every strength has a negative. Take you, for example. Determination and drive made you a damn good unit commander. You knew what needed to be done, and you made it happen, but at times it gave you tunnel vision.”

“What helps you get the job done most times—being direct and determined—is what’s causing problems with Cassie. It’s not like you to miss that and see you need to change tactics with her.”

“She’s one of those fly by the seat of the pants, go with the flow without a plan women. They drive me crazy. She’s too worried about being Ella’s friend, and that’s not what that child needs. She needs structure, limits, and predictability.”

“Stand in Cassie’s shoes for a minute. Raising a kid’s hard enough, but to step in when the kid’s six and go from being an aunt to a parent figure? That’s even tougher.”

“She’s not the first person to have to step up to raise a child.”

“Now I get it,” AJ said in a know-it-all best friend tone.

“What’s that supposed to mean?”

“Not everyone’s as strong as you are. Sure, you took on a lot of responsibility with Aubrey, but you weren’t solely responsible for her. It’ll take Cassie time to shift from being an aunt who could spoil a kid to being someone who’s got to be the bad guy. From what you said about her sister, if Cassie’s anything like her she’ll get the hang of things pretty quick.”

“That’s the problem. She’s not. If anything, Cassie’s the opposite of her sister. She’s scattered and unorganized.” He told AJ how Ella had wandered off earlier. “She’s a woman who would call her husband twice a day because she’d misplaced the kids.”

“Then help her out. Just do with it a softer touch.”

“Then at least quit being such an ass and let the rest of us have some fun.”

To Love a Texas Cowboy is available in the following formats: 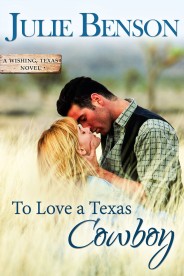 Did you know that To Love a Texas Cowboy and many titles are available digitally from Tule's own bookstore? Check it out!